I was lucky enough to see both sides of my family this weekend.

My lovely niece Annie came for a visit at the top of the weekend, and we had a birthday reunion on Sunday. Annie shares my love of baking so we went right to work on a double batch of muffins for the Sunday gig. She’d heard about S’More Muffins and, since I had a box of lo-fat brownie mix and some marshmallow fluff in the cupboard (doesn’t every one?) I thought we could give it ago. The second recipe combines two of my favorite flavors, Orange and Chocolate. 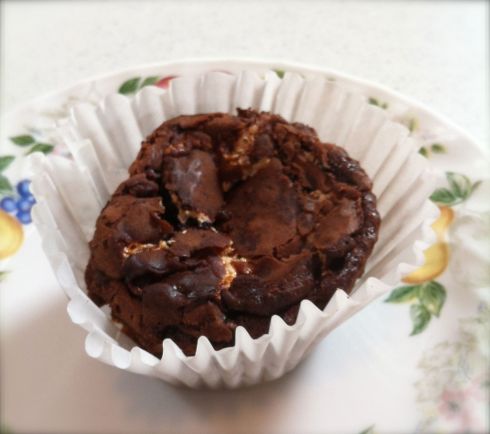 Forgive me dear reader for using a box mix, but sometimes a girl’s gotta do what a girl’s gotta do.  And since we didn’t know how these little suckers were going to turn out I wasn’t going make the brownies from scratch. It should also be noted that I hardly consider these confections MUFFINS. But when one’s sweet, darlin’ niece makes the suggestion one goes with the flow. One must make sacrifices in the kitchen of Auntly Love.

1. Preheat the oven to 350 degrees. Line 2 muffin tins with 24 large paper muffin cups  and prep each with a generous amount of cooking spray.  Set aside.

3. Using a small scoop put a heaping tablespoon of the crust in the bottom of each of the muffin cups, dividing the crust evenly. Using the back of a spoon push down firmly and smooth out. 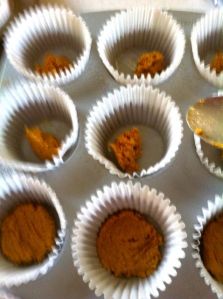 Graham Cracker Crust added to the muffin cups (top) and smashed down and ready to (bottom.)

4. Prepare the Lo-Fat Brownie Mix as directed on the back of the box.

6. Clean out the small scoop and employ it again for the Marshmallow Fluff. Place a dollop of white wonderfulness in the center of the muffin cup. 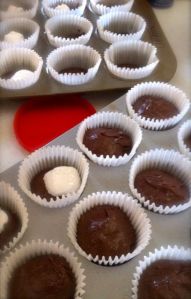 Marshmallow in place (top) and brownies with top layer of chocolate (foreground.)

8. Bake  for 30 minute until the muffins pass the toothpick test. Let cool before eating. (HINT: If the papers stick to the S’More Muffins — as mine did — dampen a paper towel, wrap it around the entire muffin, pop it in the microwave for no more than 15 seconds then gently unpeal the wrapper.)

2. In a large bowl mix all the ingredients until smooth. (I like this recipe because there’s none of this pesky mix the dry  then add the wet business. Just mix it all at once and make sure it is well incorporated, thank you very much.)

3. Divide evenly into the 15 muffin cups.

4. Bake for 25-30 minutes until tops are golden brown and the muffins pass the toothpick test.

The S’Mores were a bit complicated, but ultimately tasty. I’m not sure how they’ll do when they travel because they were pretty much scarffed up at the party. I thought the Graham Cracker Crust part was too dry, and I would add more butter. I hate to sound like Paula Dean, but really, they did need more butter. So give them an extra pat or two. However,  my taster Mary thought they were lovely. Her only suggestion is that you freeze half the batch as soon as they cool. That way you  wont be tempted to eat them all at once!

As for the Mandarin Orange Chocolate? Those were more my cup of tea. In fact, they’d be perfect with a nice hot cup of tea. Good lift (so they aren’t gooey or dense), but still hardy enough for a substantial breakfast muffin. The flavor profile of Orange to Choc was spot on. And the touch of Almond from the extract made it just a bit warmer some how. I really liked them.

This just in: Taster Andrew S. texted to let me know that the orange chocolate chip muffins rated a “delicious” while the S’mores were “AMAZING.” And Debbie M. (who was at the party on Sunday) wrote in to say: ” Mandarin choc chip muffins were soooo yummy! Thanks for bringing them to Dad’s party!”  Thanks for the feedback guys!

The delightful Annie expertly adds Marshmallow Fluff to the S’More Muffins, proving that many hands make light work in the kitchen.

Freelance writer, graphic designer, musician, foodie and Jane Austen enthusiast in Northern Baltimore County, Maryland. As a writer I enjoy both fiction and non fiction (food, travel and local interest stories.) As an advocate for the ARTS, one of my biggest passions is helping young people find a voice in all the performing arts. To that end it has been my honor to give one-on-one lessons to elementary, middle and high school students in graphic design and music. And as JANE-O I currently serve as the regional coordinator for JASNA Maryland and am working on a Regency/Federal cooking project. END_OF_DOCUMENT_TOKEN_TO_BE_REPLACED
This entry was posted on Monday, March 3rd, 2014 at 10:07 pm and posted in Thought of the Day. You can follow any responses to this entry through the RSS 2.0 feed.
« Secondary Character Saturday: R2D2
Secondary Character Saturday: Jayne Cobb (Firefly / Serenity) »