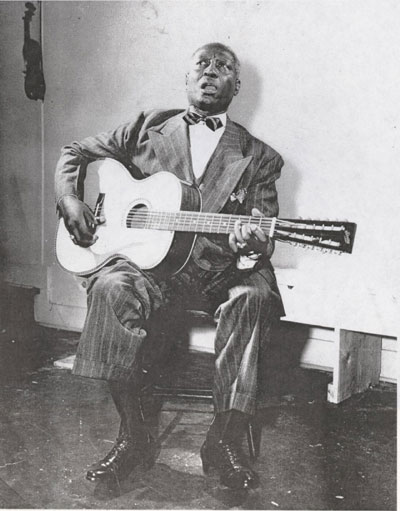 Huddie William Ledbetter was born on this day on the Jeter Plantation, Louisiana in 1889. Today is the 125th anniversary of his birth.

He was the only child born to sharecroppers Wesley and Sally Ledbetter. When he was five his family moved to Leigh, Texas.  His uncle Terrell gave him his first instrument, an accordion, shortly afterward. Ledbetter went on to master “the piano, harp, mandolin and harmonica but he is best remembered for his 12 string guitar.” [The Real Story of Huddie Leadbetter 1889 – 1949] He stopped attending school after 8th grade and left his father’s farm by the time he was 20. He went on the road to play music (when he could get the gigs) and work as a day laborer. It was said that he could pick 1000 pounds of cotton in a day. He also worked on the railroad lining tracks. 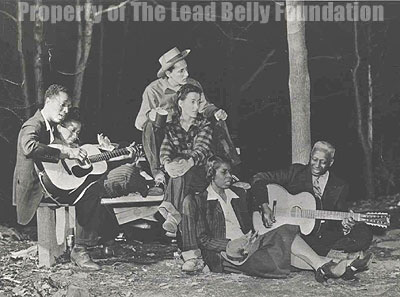 Lead Belly with Josh White and others. (Image courtesy: the Lead Belly Foundation.)

But Ledbetter was short-tempered. He once said: “ “When I play, the women would come around to listen and their men would get angry.” In 1918, he fought and killed a man in Dallas and was sentenced to thirty years  [ Lead Belly Foundation]

After serving seven years of hard labor he wrote a song asking Texas Governor Pat Neff for a pardon.

Neff took his word for it and released him, and Ledbetter left Texas for Louisiana. By 1930 he was back in prison, this time in the Louisiana State Penitentiary, in Angola for attempted homicide. There he was interviewed by John and Alan Lomax

The Lomaxes had discovered that Southern prisons were among the best places to collect work songs, ballads and spirituals and Leadbelly, as he now called himself, was a particular find…Over the next few days the Lomaxes recorded hundreds of songs. When they returned in the summer of 1934 for more recordings Leadbelly told them of his pardon in Texas. As Alan Lomax tells it, “We agreed to make a record of his petition on the other side of one of his favorite ballads, ‘Goodnight Irene’. I took the record to Governor Allen on July 1. On August 1 Leadbelly got his pardon….” [Ibid]

He moved north with the Lomaxes and began to perform in the folk community where his talents earned him the title “the King of the Twelve-String Guitar”.

Leadbelly recorded for a variety of labels, including Folkways and he performed tirelessly. Over the next 9 years his fame and success continued to increase until he fell ill while on a European Tour. Tests revealed that he suffered from lateral sclerosis (Lou Gehrig’s disease) and he died on December 6, 1949. [Ibid]

He wrote over 500 songs in the following genres:

Some of his most famous songs include:

His name was changed several times through out his life, but he preferred Lead Belly. 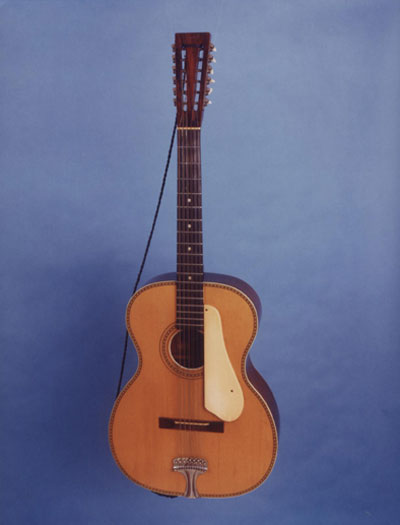 Freelance writer, graphic designer, musician, foodie and Jane Austen enthusiast in Northern Baltimore County, Maryland. As a writer I enjoy both fiction and non fiction (food, travel and local interest stories.) As an advocate for the ARTS, one of my biggest passions is helping young people find a voice in all the performing arts. To that end it has been my honor to give one-on-one lessons to elementary, middle and high school students in graphic design and music. And as JANE-O I currently serve as the regional coordinator for JASNA Maryland and am working on a Regency/Federal cooking project. END_OF_DOCUMENT_TOKEN_TO_BE_REPLACED
This entry was posted on Wednesday, January 22nd, 2014 at 1:59 am and tagged with Lead Belly and posted in Lead Belly, postaday, Thought of the Day. You can follow any responses to this entry through the RSS 2.0 feed.
« Muffin Monday: Mango Muffins
Retarded, Gay and Fat »