This Sunday I spent the afternoon at Meadow at Evergreen enjoying the Baltimore Shakespeare Factory’s performance of HAMLET.

The body count mounts as the play winds down.

Tom Delise, The Factory’s Artistic Director and the director of this production, used a light touch when it came to staging. A single set piece standing in for Elsinore Castle rises from a simple wooden platform.  Three red curtains  allow the actors access on and off stage. But Delise has his actors using all of the Meadow, so the actors are moving up and down aisles and entering from behind the audience too.

Unlike the 1,500 to 3,000 people who went to see the original play in the Globe Theatre, audience members in the Meadow have an intimate connection with the actors. Engaging the audience is one of The Factory’s core principles, and at times it felt like Hamlet, Ophelia, Gertrude and the rest were talking right to me. That really draws you into the action, and gives you a stake in what happens in the plot. 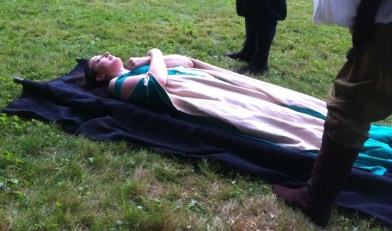 Ophelia (Ann Turiano), at peace at last, about to be taken to the graveyard.

Given that just about every high school student reads Hamlet for some English class between 9th and 12th grade, and most people have seen at least one film version of the play its a pretty good bet that you’ll know the plot and at least some of the lines before the show begins. That’s helpful because this production is fast paced, and if you didn’t already have a little knowledge of what was going on you might get overwhelmed.  And when I say fast paced I mean tight, as in TIGHT. As  in sweetly, seamlessly: bam, bam, bam; scene, scene, scene. It’s no wonder they got this notoriously long play (it’s Shakespeare’s longest) down to about 2 hours 40 minutes. Very impressive. (Although the only “complaint” I have is that without breaking for scene changes I couldn’t CLAP! And I really wanted to clap.)

The Factory has several actors playing multiple roles. Hugh F. Hill, III was vain and a little evil as Claudius and wonderfully creepy as the zombie like Ghost. Frank Vince was funny as the annoyingly dotting father Polonius and as the pious Priest.  James Miller intense as Laertes and animated as the Player King. Jess Behar and Katherine Vary were wonderful as the sycophantic  Rosencrantz and Guildenstern. They also played Francisco and Bernardo. Jim Stimson is both in the ensemble and is lead musician for the group (he plays a mean lute and guitar). Poor Amy Parochetti and Chris Ryder played 12 roles between them!

Other actors had one role.

I liked Kelly Dowling’s tender/tough approach to Gertrude. And I loved the heart-break and surprise she brought to the stage when her character realizes what a mess her life suddenly has become. 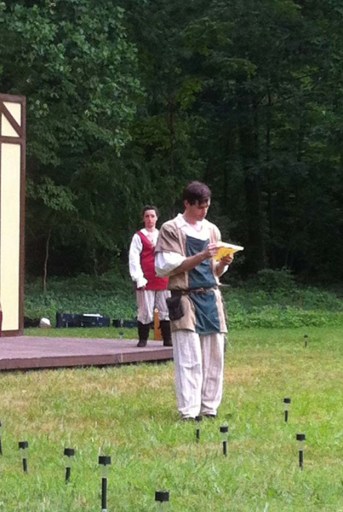 Chris Cotterman (Horatio) learns that Hamlet is coming back to Elsinore.

Chris Cotterman plays my favorite character in the show, Horatio. It’s a tough role because he’s the best friend, the second guy. He can’t upstage Hamlet (literally) and Chris doesn’t. He plays the supporting role (both in the character’s life and on stage) perfectly.

Ann Turiano is lovely as Ophelia. Her confusion over familial duty and her suddenly rocky love life in the first half is tender and heartbreaking, but its her mad scenes in the second half that steal the show. 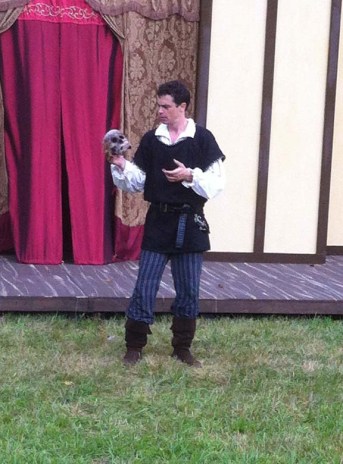 I last saw  Ian Blackwell Rogers as the title character in The Factory’s Macbeth. He brings the same energy and intensity here. It is hard to take your eyes off of him as you try to puzzle out what’s going on in that head of his. As the lines spill out of him at break neck speed he keeps you engaged and on point with the plot.

As hot as it was on Sunday I expected the actors to lose some gusto as the show went on, but the opposite happened. As they plowed into Acts Three, Four and Five they only got more intense. By the time Hamlet and Laertes were at each other’s throats my heart was pounding. And it didn’t have anything to do with the temperature.

Freelance writer, graphic designer, musician, foodie and Jane Austen enthusiast in Northern Baltimore County, Maryland. As a writer I enjoy both fiction and non fiction (food, travel and local interest stories.) As an advocate for the ARTS, one of my biggest passions is helping young people find a voice in all the performing arts. To that end it has been my honor to give one-on-one lessons to elementary, middle and high school students in graphic design and music. And as JANE-O I currently serve as the regional coordinator for JASNA Maryland and am working on a Regency/Federal cooking project. END_OF_DOCUMENT_TOKEN_TO_BE_REPLACED
This entry was posted on Wednesday, July 24th, 2013 at 12:46 am and tagged with Baltimore Shakespeare Factory, Hamlet, William Shakespeare and posted in Baltimore Shakespeare Factory, Hamlet, postaday, Shakespeare, Thought of the Day. You can follow any responses to this entry through the RSS 2.0 feed.
« Muffin Monday: Blueberry, Lemon, Zucchini
Farm Fresh Challenge: Summer Sausage Scampi »

4 responses to “July Creative Challenge: Shakespeare on the Grass”