“The sexiest part of the body is the eyes. That’s what I believe.”
—Clive Owen

Clive Owen was born on this day in Coventry, West Midlands, England. he is 48 years old.

He grew up in a the small working class town of Coventry. He is fourth in a brood of five boys. His father exited the scene when Clive was 3, and he was raised by his mother and step father. He starting acting at 13 when he was cast as the Artful Dodger in a school play. (And there has been a little bit of the Artful Dodger in almost every role he’s played since.) He says he became “completely obsessed and decided to become an actor from then on.” He moved on to the Royal Academy of Dramatic Art in London in 1987. The audition process was daunting, two monologues, one modern and one from Shakespeare. If you nailed it you were in, if you didn’t, you weren’t. He nailed it. After RADA he continued doing Shakespeare at the Young Vic.

From theatre he moved to television. His most notable series being  Chancer –where he played a con-man with a heart of gold, he’s an anti-hero who is willing to use all the arrows in his –checkered past’s– quiver to help his friends. As the show’s tag line says “He’s rude, arrogant, ingenious, unprincipled … and utterly charming.”   [Owen’s is still growing into himself as an actor in Chancer. He’s good, but he’s not great. And The production values are definitely television level.] 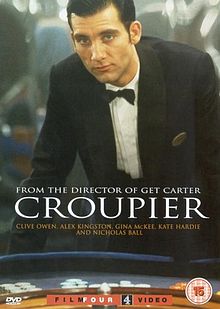 His big break in film came in the 1998 movie Croupier. Owens plays a an aspiring writer who takes a job as casino croupier to both pay the bills and help with research on a book. Owens narrates the movie in his deadpan quasi-noir style. [It is well written and well acted, and deserves a place on your Clive Owen’s Netflix queue.]

He shifted gears to play Colin Briggs a prisoner in an experimental English prison who gets rehabilitated  through gardening in Greenfingers. Helen Mirren also stars. [I really enjoyed this gentle movie. Although it is largely set in a prison it isn’t filled with the violence that is so often present in a Owen’s film. Make this #2 for your C.O. Netflix queue.]

Back on BBC One he starred in Second Sight as Chief Inspector Ross Tanner a detective who is loosing his eye sight.

He played a key role in Robert Altman’s ensemble film Gosford Park. [There’s so much to see in Gosford Park you’ll probably need to watch it more than once. Plus…Maggie Smith bonus!… put it in your queue.]

On stage he appeared as Dan both in the West End and Broadway versions of Closer. When the show was made into a movie in 2005 he switched roles and played Larry. He garnered a Golden Globe and BAFTA award for the film.

He followed Closer with a trio of films, Derailed, Sin City andInside Man in quick succession.  He was rumored to be the next James Bond, but the producers chose Daniel Craig instead. Which is fine because it left him open to take his best role to date, Theo Faron in Alfonso Cuaron’s Children of Men.

Children of Men is a gritty dystopian look at life in 2027 England. “It’s a heartbreaking, bullet-strewn valentine to what keeps us human.” (–Keith Phipps) and is loosely based on the P.D. James novel of the same name. Owen, whose characters are often anti heroes who spend a movie reacting to shit that thrown at them, is the anti-ist of heroes who has the most shit ever thrown at him in the roughly 100 minute running time of the film. And he is wonderful in it. [This is my favorite Owen’s movie and my number one pick for your Netflix queue.]

He is good in other films, Elizabeth: The Golden Age, King Arthur, andInside Man; and just OK in a slew of films where he always seems to play the same guy with a gun.  He was very funny poking fun at his leading man image in a guest spot on the Ricky Gervais show Extras. [ I didn’t make it through the HBO Hemingway & Gellhorn, (I’m not sure if was a too tense Nicolle Kidman, the excess of sex, Clive’s mustache, or a combination of  all three, but  I gave up about 45 minutes in.) There are a couple of films I’m looking forward to seeing– The Boys Are Back and Shadow Dancer both look interesting. ]

He met his wife when they were cast opposite each other as Romeo and Juliet 20 years ago. For an actor considered an international sex symbol/tough guy he is very family oriented. He does a movie for several months then comes home where he enjoys being a homebody/nobody. They have two pre-teen girls.