“He who angers you conquers you.”

Elizabeth Kenny was born on this day in Warialda, New South Wales, Australia in 1880. Today is the 132nd anniversary of her birth.

Because her father was an itinerant farmer the family moved often when Elizabeth was growing up. Her education was limited to home-schooling and a variety of small town primary schools. When she was 17 she fell off her horse and broke her wrist. Her father, Michael, took her to the town of  Toowoomba to see Dr. Aeneas McDonnell. Kenny remained in Toowoomba to recover from the injury and grew fascinated with Dr. McDonnell’s medical books, especially those on anatomy, and his model skeleton. It started Kenny on her life long journey in medicine. She made her own model skeleton to study how muscles and bone worked together in the human body. 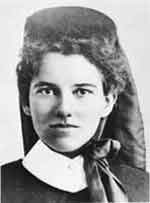 At 18 she became an unaccredited,  unpaid bush nurse. She later (probably) volunteered at the maternity hospital at Guyra in New South Wales.

There is no official record of formal training or registration as a nurse. She probably learned by voluntary assistance at a small maternity hospital at Guyra, New South Wales. About 1910 Kenny was a self-appointed nurse, working from the family home at Nobby on the Darling Downs, riding on horseback to give her services, without pay, to any who called her. [Elizabeth Kenny, by Ross Patrick, Australian Dictionary of Biography]

Kenny opened St. Canice’s Cottage Hospital in Clifton. She kept in contact with Dr. McDonnell and would often telegraph him when a case stymied her.

In 1911 one such case presented itself. She contacted McDonnell about a new case that stymied her.. a young girl who was crippled, but not from a fall or external trauma. McDonnell replied that it was probably “It sounds like Infantile Paralysis.  There’s no known treatment, so do the best you can.” [Sister Elizabeth Kenny. Australians Documentary Series. 1998. from Teachspace.org] Kenny used a common sense approach. She applied hot compresses to the little girl’s spasming muscles. Hot, heavy woolen blankets were applied that help loosen the muscles and relieve the pain. Then she stretched the little girls legs and strengthened the muscles. It worked. The pain abated, the girl (allegedly) asked “Please, I want them rags that well my leg.”

Of the twenty children in the district, the six that Kenny treated survived without complications. [Sister Elizabeth Kenny. Australians Documentary Series. 1998. from Teachspace.org]

With the outbreak of World War I Kenny, with a letter of recommendation from Dr. McDonnell, joined the Australian Medical Corps. She worked on hospital ships bringing the wounded home from Europe. She was received a shrapnel wound to the leg while at the front.

She patented her invention of a stretcher that immobilized shock patients during transport, the Sylvia Stretcher, and used the royalties  open a clinic for polio patients in Townsville, Queensland. Here she treated long-term polio and cerebral palsy patients, tossing aside the braces and concentrating on hot baths, passive movements and foments.

Her “homespun” methods for polio treatment, though effective, were controversial as the  accepted practice was to splint the affected limbs to keep them rigid. That way the stronger muscles wouldn’t pull on the weaker/paralyzed muscles and create deformities. Kenny thought that splinting the limbs would actually produce deformities and increase paralysis. She alternately dismissed, ridiculed or vilified by the medical establishment. Kenny soldiered on, buoyed by the support of parents who witnessed first hand the results her methods were having on their children. Kenny opened clinics in Brisbane and through out Queensland.

The controversy over her methods followed her to England  and the US. Kenny worked in the Minneapolis General Hospital where…

Her methods became widely accepted. She began courses for doctors and physiotherapists from many parts of the world. The Sister Kenny Institute was built in Minneapolis in 1942 and other Kenny clinics were established. [Elizabeth Kenny, by Ross Patrick, Australian Dictionary of Biography] 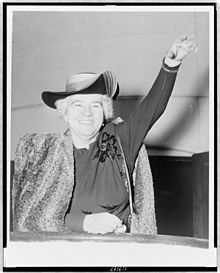 She developed Parkinson’s disease and retired to Toowoomba in 1951. Kenny died there of cerebrovascular disease on 30 November 1952.

Sister Kenny’s pioneering principles of muscle rehabilitation became the foundation of physical therapy. Today, Sister Kenny Rehabilitation Services is one of the premier rehabilitation centers in the country, known for its progressive and innovative vision. [Nurses for nurse everywhere.info]

“As much as possible, I try to encourage people to use stunt men because that is really their job.”

Nigel John Dermot “Sam”  Neill was born on this day in Omagh, County Tyrone, Northern Ireland in 1947. He is 65 years old today.

His father, a New Zealander, was stationed in Northern Ireland when Sam was born. The family lived there until Sam was six when they returned to Christ Church.

Sam stuttered badly as a child, and shied away from talking to people. He would refrain from raising his hand because he was afraid that he wouldn’t be able to say anything if he was call on.

“My fear was nothing would come out at all … and I would just be left with a face that was going redder and redder and more purple. The upside of that was I probably learned to listen better than most of my contemporaries… I’m still fairly economic with words and I think that’s a good thing.” [ The British Stammering Association]

He says his stammer gradually became less pronounced. As he  became involved in debate and acting, at University of Canterbury, he gained  self-confidence. The more self-confidence he had, the less he stuttered. Occasionally you can still hear a snippet of it. Neill actively supports several stammering support associations like the British Stammering Association and the Australian Speak Easy Association.

His first real film role was in 1977’s Sleeping Dogs, a N.Z. based drama. He got a much wider audience as Harry, the romantic lead in the period drama My Brilliant Career opposite Judy Davis.

After a few television roles he landed quite a different kind of leading role in Omen III: The Final Conflict. Sure, Neill always had a bit of a devilish grin, but …. On a scale of 1 to 10, with My Brilliant Career as a strong 10… I’d give Omen III a weak 6.66.  The Omen brought Neill to the London film making scene under the mentorship of James Mason.

For a New Zealander, he played a lot of Soviets. Some were good Russians, like Vassili in Hunt for Red October. Other times he played “A strict Eastern European autocrat” [TalkTalk] as he did in Enigma and Amerika.

He teamed up with Academy Award winner Merle Streep for the drama A Cry in the Dark (it was released originally as Evil Angels in Australia and New Zealand.)

“Here Neill played her distressed husband, desperately trying to save the day when nut-job Billy Zane kidnaps both Kidman AND Neill’s boat. It was a superb thriller, boosting its stars big-time…” [TalkTalk]

I don’t know that I’d go so far as to call it “superb”, but…the scene where Neill is stuck inside the quickly sinking second boat (the one Billy Zane was on)  is more than worth the price of a Netflix rental.

In 1993 he was the, angry, odd-man-out in a love triangle between mute Holly Hunter and Harvey Keitel the beautiful made The Piano.

So… if you’ve never heard of any of the movies I’ve written about so far in this blog, I’m betting your heard of this one…Neill played Dr. Alan Grant the Jurassic Park franchise. I thought J.P. the book was wonderful, the movie? Not so much. The dinosaurs were cool, REALLY cool, but the acting, script, and direction was flat — except for my boy Sam. I thought he pulled off the requisite wonder and reluctance needed for the role.

Back on the small screen he’s played  Merlin, Komarovski in Doctor Zhivago, and Cardinal Wolsey in The Tudors.

One of my favorite Sam Neill movies is The Dish. In it “A remote Australian antenna, populated by quirky characters, plays a key role in the first Apollo moon landing.” [IMDB: Movie Data Base] 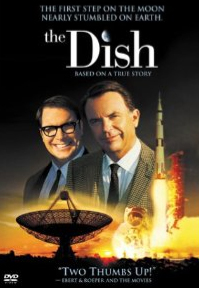 Neill currently  he enjoys relaxing by making wine at his Two Paddocks Winery on New Zealand’s South Island. Here he shows a bit of his trademark deadpan humor in a promotional video for the vineyard.