“Love is the triumph of imagination over intelligence.” 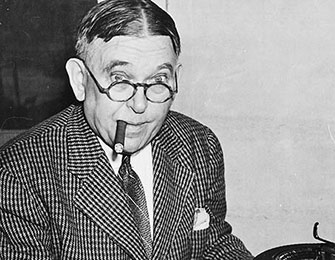 The Sage of Baltimore. [Image courtesy: The American Mercury]

Henry Louis Mencken was born on this day  in Baltimore, Maryland in 1880. Today is the 132nd anniversary of his birth.

Mencken lived in the same house in the Union Square neighborhood of the city for all but 5 years of his life. At 9 he read Huckleberry Finn by Mark Twain and knew he wanted to become a writer. His family had other ideas.

His grandfather had prospered in the tobacco business and his father, August, continued the family tradition. Mencken studied at the Baltimore Polytechnic Institute (1892-96) and then worked at his father’s cigar factory. [Books and Writers] 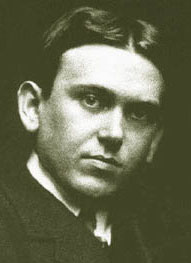 He worked for 3 years at the family owned business and would have stayed indefinitely, but upon his father’s death in 1899  Mencken was “free to choose his own trade in the world.”

Within a week, Mencken “invaded” the city room of the old Baltimore Morning Herald to face down the city editor and ask for a job…There were no jobs that day, but Mencken, persistent, returned daily for two weeks. “Finally I was sent out on a small assignment — it was a stable robbery at Govans — and a few days later I was on the staff,” [H.L. Mencken, Pioneer Journalist, By Jacques Kelly The Baltimore Sun]

His skill as a writer and his reputation for being able to turn a phrase grew. So 6 years later when the Herald closed its doors Mencken applied for a position at the larger Baltimore Sun.  He started at “The Sun as its Sunday editor, became an editorial writer, and in 1911 started writing his own column, the Free Lance Mencken.”  He worked at The Sun until 1948, bring his unflinching wit and critical eye to everything he saw.

“I believe that a young newspaper reporter in a big city… led a live that has never been matched… for romance and interest.” [Mencken from his only known audio interview. Courtesy of: The American Mercury.com]/

He was a war correspondent in Germany and Russia from 1916 to 1918. During WWI Mencken was pro-German (a very unpopular thing to be in patriotic Baltimore of 1917).

In 1919 he published The American Language, a guide to American expressions and idioms.

From 1914 to 1923 Mencken co-edited with drama critic George Jean Nathan (1882-1958) the Smart Set, which mocked everything from politics to art, universities to the Bible…[Books and Writers]

He preferred realism to modernism and he helped the careers of Sinclair Lewis, Dorothy Parker and Eugene O’Neill. 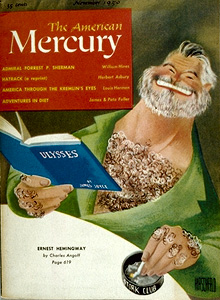 He started The American Mercury monthly magazine, working on the magazine from 1924 t0 1933.

A stroke in 1948 left him nearly unable to read or write. Speaking took a lot of effort, and he grew easily frustrated. He spent his remaining days organizing his papers and letters (which can now be found in H.L. Mencken Room and Collection at the Central Branch of the Enoch Pratt Free Library on Cathedral Street in Baltimore.

Here are a few more quips from the Sage of Baltimore:
Advertisement

Freelance writer, graphic designer, musician, foodie and Jane Austen enthusiast in Northern Baltimore County, Maryland. As a writer I enjoy both fiction and non fiction (food, travel and local interest stories.) As an advocate for the ARTS, one of my biggest passions is helping young people find a voice in all the performing arts. To that end it has been my honor to give one-on-one lessons to elementary, middle and high school students in graphic design and music. And as JANE-O I currently serve as the regional coordinator for JASNA Maryland and am working on a Regency/Federal cooking project. END_OF_DOCUMENT_TOKEN_TO_BE_REPLACED
This entry was posted on Wednesday, September 12th, 2012 at 12:44 pm and tagged with H L Mencken and posted in Baltimore, H L Mencken, History, Maryland, Non Fiction, postaday, Thought of the Day, Today's Birthday, United States, World War One, World War Two, Writing. You can follow any responses to this entry through the RSS 2.0 feed.
« Thought of the Day 9.11.12 Harry Connick Jr.
Thought of the Day 9.13.12 Roald Dahl »