I know its Monday and I should be making Muffins, but it snowed, again,  and I had other things on my FROZEN mind. Since I knew I would be spending some quality time outside shoveling the driveway I decided to make it fun AND make it all part of my blog today.

Ice marbles in the process of freezing in the snow.

One thing I’ve wanted to do since the weather turned colder is try my hand at making ICE MARBLES. This is an idea I stole from Facebook and Pinterest.

Blow the balloons up as far as they’ll go, then release the air. Insert the small end the funnel into the neck balloon and put the food dye into body. Carefully take the neck off the funnel and put it on the end the faucet. Put a bowl under the balloon.  Hold the balloon’s neck in place around the faucet as  you slowly fill the body with water (it will come off if you aren’t careful). 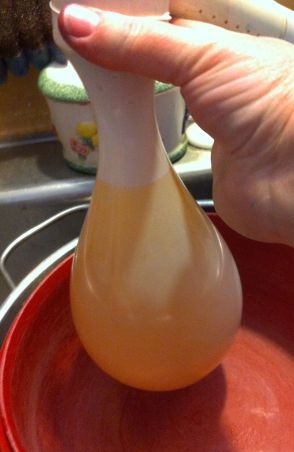 Filling up Mr. Yellow, with a red bowl underneath, ready to catch the balloon.

Keep filling the balloon until it is totally full. You should only have a little space a the top of the neck to tie off. (This is messy — heck the entire procedure is messy!)

Mr. Rd in a white bowl. Tied off and ready to go outside to freeze.

I kept the balloons in their bowl on the porch until I was ready to transfer them to their snowy location.

When the snow slowed down I went outside and shoveled the driveway and sidewalk. Today’s snow is the first one this winter that is really snowman worthy. So with thoughts of Olaf dancing in my head I considered how to best make my own little frozen guy. I used sand castle method and packed the snow into forms instead of rolling balls. (I’m a kid at heart, but I’m not getting on my hands and knees and rolling snow balls). I got what I needed from the garage — a clean trashcan was perfect for the base, a 5 gallon bucket for the body and a potted plant pot (starter pot) for the head. A little galvanized bucket made the perfect hat.  I found some sticks for his arms.

“Olaf” in the works.

Then I brought my ice marbles over from the porch and placed them around my snow man.

When I’m doing a blog I tend to take a LOT of process of pictures. It kind of drives my family crazy. Like WHY do have to take a picture of EVERYTHING? Well today’s a good example of why I need to take tons of pictures, and document every step of the way. Because life doesn’t come with a Command Z button. That’s why. If something goes wrong you can’t go magically backward and do a mulligan. So today when I realized that I’d put the Ice Marbles down the wrong order (they were mean to be in ROYGBV order) I SHOULD have taken a photo before moving the balloons.

I picked up the Orange one and moved it.

Moved the Yellow one. Piece of cake.

Picked up Mr. Red and SPLAT!!!

Cold, red water all over my nice white snow. (And my coat and gloves and pants.) It looked like my snow man had died.

I covered up the snowman blood as best I could and moved the yellow balloon (still in the bowl because it had a pin sized hole at the top) over instead. I’m trying not to let improper color order bother me too much. I don’t think Olaf will mind. 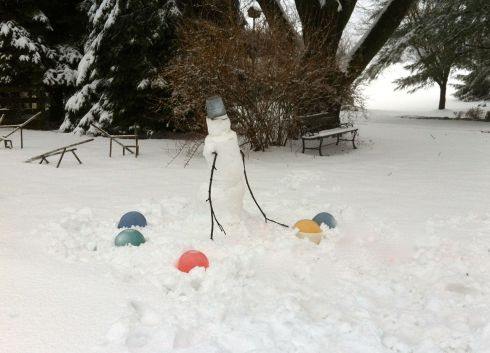 With a little luck it will snow just enough more to really cover up the rest of that red.

I was hoping to surprise the neighbor kids when they got home from school. … And I mean surprise them in a fun-snowman-ice-marble good kind of way, not in a creepy-bleeding-snowman kind of way.

This blog goes out to: Maggie, Jenny and Hope — who keep  me young at heart.

Freelance writer, graphic designer, musician, foodie and Jane Austen enthusiast in Northern Baltimore County, Maryland. As a writer I enjoy both fiction and non fiction (food, travel and local interest stories.) As an advocate for the ARTS, one of my biggest passions is helping young people find a voice in all the performing arts. To that end it has been my honor to give one-on-one lessons to elementary, middle and high school students in graphic design and music. And as JANE-O I currently serve as the regional coordinator for JASNA Maryland and am working on a Regency/Federal cooking project. END_OF_DOCUMENT_TOKEN_TO_BE_REPLACED
This entry was posted on Monday, February 3rd, 2014 at 9:21 pm and posted in Olaf, postaday, snow. You can follow any responses to this entry through the RSS 2.0 feed.
« Secondary Character Saturday: Disney Princes
Muffin Tuesday: Blueberry, Carrot, Oatmeal »