Fan-tastic — Prepping for the Regency Ball

When you are a middle-aged, middle class, American woman you don’t get invited to many balls. It just doesn’t happen. I’ve reconciled myself to that small fact of life.  Unlike Emma Woodhouse I don’t scan the mail looking for invitations. However, when Johns Hopkins announced that they would be hosting a  Regency Harvest Ball my heart did a little flutter.

I have my own Regency dress, long gloves, shawl and reticule, if ever there was a ball at which I was destined to dance… this is it. I will be attending with the Baltimore Shakespeare Factory. We’ll be adding period color by portraying real life Federal men and women from the Baltimore area.

I quickly fessed up to the fact that my dress, while authentic down to the material and the covered buttons,  is more  everyday dress and less ball gown. I will definitely be attending in my ” ‘Country’ fashions.” So I’ll be portraying a servant and helping the ladies (those who are spending $250 a ticket for this fundraiser) with their hair in the Fan Room.

This is super awesome [two words I will not be using at the ball] because I love Art of the Fan and doing “costume” hair.

The language of the fan was often the most direct means of communication between a two people. It would be unthinkable for a young woman to come up to a gentleman she didn’t know and engage in conversation. But if she ran her fingers through the ribs of her fan in his direction, and he was perceptive enough to get the cue, he knew she had just said “I want to talk to you.”  Other fan gestures indicated jealousy, love, desire, and attachment to another.

A hand painted, wooden replica Brise style regency fan. This fan, which is painted on both sides, can be found for sale on Etsy.com 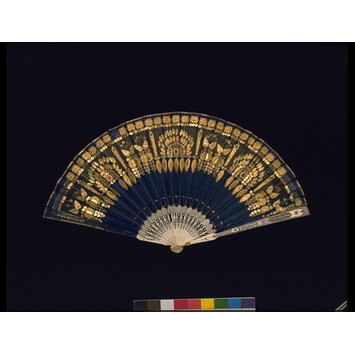 An assortment of fans found on www.JaneAusten.co.uk

Freelance writer, graphic designer, musician, foodie and Jane Austen enthusiast in Northern Baltimore County, Maryland. As a writer I enjoy both fiction and non fiction (food, travel and local interest stories.) As an advocate for the ARTS, one of my biggest passions is helping young people find a voice in all the performing arts. To that end it has been my honor to give one-on-one lessons to elementary, middle and high school students in graphic design and music. And as JANE-O I currently serve as the regional coordinator for JASNA Maryland and am working on a Regency/Federal cooking project. END_OF_DOCUMENT_TOKEN_TO_BE_REPLACED
This entry was posted on Friday, October 11th, 2013 at 3:14 am and tagged with 1795–1820 in fashion, Emma Woodhouse and posted in Baltimore, Baltimore Shakespeare Factory, History, postaday, Regency, Thought of the Day. You can follow any responses to this entry through the RSS 2.0 feed.
« Farm Fresh Challenge: Fennel Stuffed Cabbage
Thought of the Day 10.11.13 Eleanor Roosevelt »

6 responses to “Fan-tastic — Prepping for the Regency Ball”