This post is in response to a writing prompt from Viewfromtheside’s Blog  This weekend’s theme is “Amusing Consequences”.
Click here to go to ViewfromthesideS blog and read other entries.

Although based on a real story names have been changed and circumstances slightly altered.

Every one had to take the class. It was a core requirement for all Publications Design Master candidates… Writing and Design. A 5 hour behemoth that would ruin your Saturdays and winnow out the weak from the strong, W & D  was the class every one dreaded. This was the class where the project you so painstakingly nurtured for days would be literally torn to shreds by the professor on the the presentation board in a matter of seconds for reasons that seemed — at the beginning of the semester at least — completely random and mysterious.

You could enter the Pub Design program with either a writing or graphic design portfolio under your belt. So this class — Writing and Design — should have provoked equal fear from both sides of room.  I came with a notebook full of short stories and poems and a degree in creative writing. The  in-class critiques were based on what design you put up on the board, the writing portion was reviewed later, between classes. So the design, the part I was new to, was immediate — and brutal.

There were two schools of thought when it came to when you added this class to your schedule. The “Get some classes under your belt, and ease in to it” school of thought and the “Get it over with” school of thought. I fell under the second category.

So on the very first Saturday of my first semester of graduate school I lined up my new t-square, my virgin pad of tracing paper, my pencils and my X-Acto knife on the table furthermost from the door and took a seat.

Each large rectangular table had six round, padded stools around it. It was like bellying up to a bar, only there was no alcohol, no music, and there wasn’t a friend in site. In fact I didn’t know any one else in the room.

We started promptly. Course outlines… introductions… expectations… at about the on hour point they asked if we had any questions?

QUESTIONS? My quick look around the room confirmed that everyone was as overwhelmed as I was. No one would be stupid enough to raise their hand and ask a question.

But then the person next to me moved. She didn’t put her hand up, but she definitely changed her body posture to draw attention to herself. “I have a question.” She said in a loud clear voice. Then she went on to ask a long and complicated question that I didn’t understand and have totally forgotten.

It was at this point that I thought I’m sunk. I’m totally out of my league. The excitement of starting graduate school had been slowly eroding in the last hour, but with this bossy girl and her incompressible question I seriously started to wonder if I could quit now and get some of my money back.

The design professor (this class was team taught, so there was one design prof. and one writing prof.) seemed pleased by the inquiry. “Yes, Alissa.” The use of her name with out consulting the class list confirmed that she’d taken classes from him before. The use of his smile meant she’d actually done well in those classes. “I was just about to get to that.”

The look of confusion, dismay and the fact that I was about to be the first person in the room to give up and walk out must have been pretty clear on my face. I tried to take a deep breath and stop the flight impulse. As I s-l-o-w-l-y released the breath I looked up and saw that the man across from me, an ex-Marine in fatigues, had caught my eye. He gave me a stoic nod and the tiniest roll of his hooded eyes.

Next up we were given a design exercise. A breeze for the experienced designers, a black cloud of confusion for the writers. We were each to come up with a concept sketch for the assignment, share it with our table mates and then present the best one on the board for critique by the rest of the class.

When design time was up Allissa took total control of the table with a fake friendly smile and a “Lets see what everybody’s got.” I pushed my sketch in the pile with a shrug. I knew it was crap. I didn’t know what I was doing.  Starting with the girl sitting on the other side of her, Allissa explained why each sketch wouldn’t work. She allowed for some discussion, and a few people had the confidence and knowledge to speak up, but she was a juggernaut. Time was running out as she approached the end of the pile (mine). She looked at it gave a little sad shake of her head then turned it upside down  with out discussion. Then she held up her sketch. “Here’s my idea, and this is why I think it embraces the concept.” She said it with so much confidence that no one bothered to argue with her. And really it was  a good sketch.

She sashayed up to the cork board and pinned her sketch up to those representing the other 5 tables and a half hour of discussion ensued.

I tuned out. I was tired and hungry and defeated. The chosen few at the front of the room sounded like they were talking in the “Blah, blah, blah” language spoken by the adults in a Charlie Brown Peanuts special. I wasn’t ready to be an adult. I wasn’t ready for this. I concentrated on how fast it would take me to pack my gear and bolt at the break.

Then, mercifully, it was time for lunch. I threw the supplies I had so carefully arranged on the table back into my bag, grabbed my t-square and headed to the door.

But there was a bottleneck at the exit. I wasn’t the only one as anxious for their half hour of freedom.

I felt someone move next to me. Someone big It was my Marine table mate.

He gave me another nod.

First and only I thought. “Yep.” We moved a forward, closer to the door. Personal space zeroed out as the bodies in the queue compressed.  “You?”

“No, this is my third semester.”

We moved another step to the exit. I was almost free.

Before he could answer we were through the press at the door and into the wider expanse of the hallway.

“Hum.” He agreed. We got to the front door and out into the street.

It felt good to breathe again.

“You’ll feel better after you eat.” He told me knowledgeably.

But I wasn’t going to eat. I was going to flee.

He headed to Main Street at a brisk march. I watched as a gaggle of students parted to make way for him. A Red Sea to his  cammo Moses.

My car was in the green lot, the other way. I took a few steps toward my escape vehicle, away from conflict, away from struggle, away from growth.

Then my stomach growled.

I would feel better after I ate. I turned around an headed to the eateries on Main Street.

When I got back to the class room I went to the table closest to the door — as far away from the other table as possible, and close enough to the door that I could bolt if I changed my mind again. I asked a friendly looking girl if any one was sitting on the stool next to her. No one was.

I  put my bag down and introduced myself. When the Marine came in I nodded to another empty chair at this new, friendlier table. But he shook his head. He would soldier on at the old one… a braver man than I.

“Were you here for the first half of class?” She inquired. Her smile was wide and friendly and full of kindness.

“I was sitting over there.”

At that moment Allissa gave a chortle of laughter that reverberated in the room.

It was a good move. That nice girl and I became best friends. I stuck with the class and with the master program.

And although I may not have learned a lot in the way of design concepts that day (those would come) I did learn several important lessons that day: 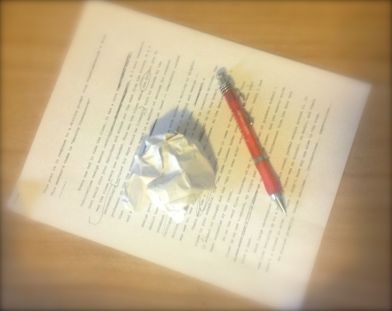 Freelance writer, graphic designer, musician, foodie and Jane Austen enthusiast in Northern Baltimore County, Maryland. As a writer I enjoy both fiction and non fiction (food, travel and local interest stories.) As an advocate for the ARTS, one of my biggest passions is helping young people find a voice in all the performing arts. To that end it has been my honor to give one-on-one lessons to elementary, middle and high school students in graphic design and music. And as JANE-O I currently serve as the regional coordinator for JASNA Maryland and am working on a Regency/Federal cooking project. END_OF_DOCUMENT_TOKEN_TO_BE_REPLACED
This entry was posted on Friday, May 17th, 2013 at 9:08 pm and tagged with Creative writing, Graphic design and posted in postaday, Thought of the Day, Writing. You can follow any responses to this entry through the RSS 2.0 feed.
« Studs Terkel 5.16.13 Thought of the Day
Secondary Character Saturday: Sean Bean: Odysseus »

One response to “Emergency Exit Strategy”