“Most of us have jobs that are too small for our spirits.”–Studs Terkel 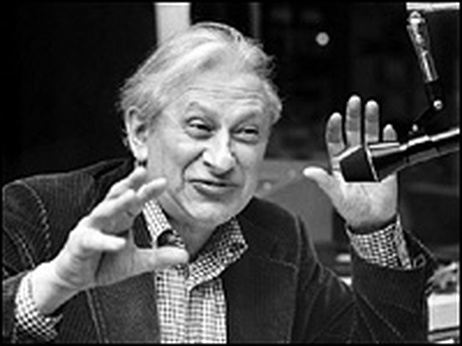 Louis “Studs” Terkel was born on this day in New York City, New York, USA in 1912. Today is the 101st anniversary of his birth.

Studs was the youngest of three boys born to Samuel and Anna Terkel. Both his parents worked in the clothing industry. His father was a tailor and his mother was a seamstress. The family moved to Chicago in 1922 and the Terkels opened a boarding house. There Studs met people from all over the world and listened to their stories.

Terkel later credited his curiosity and comfort with the world’s people to the many tenants he met there. “The thing I’m able to do, I guess, is break down walls,” he once told an interviewer. “If they think you’re listening, they’ll talk. It’s more of a conversation than an interview.” [Biography.com]

He went to the University of Chicago  and in 1934 he earned his law degree. But Studs’ talents lie else where and he didn’t take the Bar exam.

It was the middle of the Great Depression and he joined the WPA working in the radio division of the Writers Project. He found himself both writing and performing on air. He did both scripted work and read the news. Terkel did a stint in the Air Force then came back to radio. He covered the news, sports and eventually got his own interview and music show (he could play what ever he liked, so the show was an eclectic mix of folk, opera, jazz and blues.) In 1945 he made the leap to TV and hosted Stud’s Place.

His first book was Giants of Jazz published in 1956.

his first book of oral history interviews, Division Street: America, … It was followed by a succession of oral history books on the 1930s Depression, World War Two, race relations, working, the American dream, and aging. His last oral history book, Will the Circle Be Unbroken: Reflections on Death, Rebirth, and Hunger for a Faith, was published in 2001.  [Studs Terkel.org]

He says in the preface of Division Street:

I realized quite early in this adventure that interviews, conventionally conducted, were meaningless. Conditioned clichés were certain to come. The question-and-answer technique may be of some value in determining favored detergents, toothpaste and deodorants, but not in the discovery of men and women. [Division Street]

It was better to just turn on the tape recorder and talk — as if your were sitting down to have a drink  at the bar in Stud’s Place.

His 1974 book Working became a Broadway play a few years later and we got to know The Housewife, The Cleaning Women, The Long Distance Trucker, Joe, and a dozen or so other every day characters that had never made it to the stage before.

In 1988 Terkel appeared as Hugh Fullerton in the John Sayles movie 8 Men Out about the Chicago Black Sox scandal.

He was still writing into the 21st Century, his last book, P.S.: Further Thoughts from a Lifetime of Listening, was released in 2008, but open heart surgery in 2005 (at 93) slowed him down — and forced him to stop his habit of smoking two cigars a day.

Freelance writer, graphic designer, musician, foodie and Jane Austen enthusiast in Northern Baltimore County, Maryland. As a writer I enjoy both fiction and non fiction (food, travel and local interest stories.) As an advocate for the ARTS, one of my biggest passions is helping young people find a voice in all the performing arts. To that end it has been my honor to give one-on-one lessons to elementary, middle and high school students in graphic design and music. And as JANE-O I currently serve as the regional coordinator for JASNA Maryland and am working on a Regency/Federal cooking project. END_OF_DOCUMENT_TOKEN_TO_BE_REPLACED
This entry was posted on Thursday, May 16th, 2013 at 2:03 pm and tagged with Chicago, Studs Terkel, the Musical, Working and posted in Chicago, postaday, Studs Terkel, Thought of the Day, Today's Birthday, Writing. You can follow any responses to this entry through the RSS 2.0 feed.
« L. Frank Baum 5.15.13 Thought of the Day
Emergency Exit Strategy »