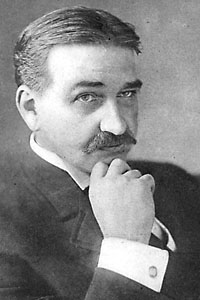 Lyman Frank Baum was born on this day in Chittenango, New York, USA in 1856. today is the 157th anniversary of his birth.

Frank was the seventh of nine children born to Benjamin and Cynthia Baum. The Baums were wealthy. Benjamin made his fortune in the oil fields of Pennsylvania. And Frank grew up happy at the family estate of Rose Lawn. He was a shy child, and, because of a “weak heart,”  he was home schooled for most of his life. He loved to read and spent hours in his father’s library. He didn’t like classical fairy tales — their goblins and villains were too scary — so he made up his own stories and shared them with his brothers and sisters.

When he was twelve his father… hoping to toughen Frank up and cure him of his ‘daydreaming,’ sent him to the Peekskill Military Academy. Baum was miserable there for over a year, and the only results of the experiment were a physical (and possibly also psychological) breakdown, and a lifelong aversion to both formal education and the military. [The Oddness of Oz]

Once home he turned to creative writing. His father bought him a small printing press and, along with his little brother Harry, “he started his own newspaper, the Rose Lawn Home Journal” [the Literary Network]. Frank filled the pages, honing his craft by cranking out articles, fiction and poetry. Other publications included Baum’s Complete Stamp Dealers’ Directory an 11 page  booklet for amateur philatelist and The Poultry Record in which Baum wrote about Hamburg chickens. “He would also write about the raising and breeding of chickens in The Book of Hamburgs. (1896)” [Ibid]

He became fascinated with acting and the theater.

He developed an intense and enduring fascination with the theater. In 1878, he began to work as a professional actor. Four years later his father bought him a small dramatic company, and Baum was soon adapting and starring in a romantic melodrama, The Maid of Arran [The Oddness of Oz]

But Baum had bad luck in almost every business endeavor he put his hand to. The Maid of Arran was a moderate success, but while he was touring with the play his theater back home (the one his father bought him) burned down. The company lost the building, all the sets and costumes, and all of the scripts (except those they were traveling with). Ironically the Baum play that was running at the time was called “Matches.”

Other short-lived opportunities soon soured. And he struggled for long-term success. In 1882 he married Maud Gage. Now he had a family to provide for. The time of being a daydreamer were over.

The family moved Aberdeen, South Dakota where he opened a department store, Baum’s Bazaar. The store failed — Frank let people have too much store credit. He became an editor of The Aberdeen Saturday Pioneer, where, after the Massacre at Wounded Knee, he wrote (what one hopes was) a Swiftian inspired modest proposal that all Native Americans be exterminated…

“Having wronged them for centuries, we had better, in order to protect our civilization, follow it up by one more wrong and wipe these untamed and untamable creatures from the face of the earth.”

He tried his hand at managing a baseball club and worked as a buyer for a department store. Nothing seemed to stick.

Baum moved the family to the Humboldt Park neighborhood of  Chicago in 1891. He worked as a reported for the Evening Post, edited a magazine on window displays and worked as traveling salesman.

In 1897, he finally started to have some success with his writing.   Mother Goose in Prose, stories based on traditional Mother Goose poems paired with lovely Maxfield Parrish illustrations, sold well enough that he could quit his door-to-door salesman job. Two years later Baum published Father Goose, His Book this time with W.W. Denslow as his illustrator and had even greater success.

Cover of the first edition of the Wonderful Wizard of Oz [Image courtesy: Loc.gov]

Unlike other books for children, The Wizard of Oz was pleasingly informal; characters were defined by their actions rather than authorial discourse; and morality was a subtext rather than a juggernaut rolling through the text. [SmithsonianMag.org]

Baum wrote 13 more Oz books (some coming as frequently as one a year.) He had done more than write a best seller, he had created a new genre of fiction… The American Fairy Tale.

He wrote dozens of other books, from Dot and Tot of Merryland to The Life and Adventures of Santa Claus to his last book Phoebe Daring: A Story for Young Folk, but the Oz books were his bread a butter best sellers.

The family moved to Hollywood, California and Baum tried his hand at making silent films with the creation of the Oz Film Manufacturing Company. He wrote, directed and acted with the company which used experimental film effects to capture some of Baum’s fantastic themes. He also  worked with the Uplifters theatre troupe.

“To please a child is a sweet and lovely thing

that warms one’s heart and brings its own reward.” An illustration by W. W. Denslow from The Wonderful Wizard of Oz, also known as The Wizard of Oz, a 1900 children’s novel by L. Frank Baum. (Photo credit: Wikipedia)

Freelance writer, graphic designer, musician, foodie and Jane Austen enthusiast in Northern Baltimore County, Maryland. As a writer I enjoy both fiction and non fiction (food, travel and local interest stories.) As an advocate for the ARTS, one of my biggest passions is helping young people find a voice in all the performing arts. To that end it has been my honor to give one-on-one lessons to elementary, middle and high school students in graphic design and music. And as JANE-O I currently serve as the regional coordinator for JASNA Maryland and am working on a Regency/Federal cooking project. END_OF_DOCUMENT_TOKEN_TO_BE_REPLACED
This entry was posted on Wednesday, May 15th, 2013 at 4:16 pm and tagged with L. Frank Baum, Wizard of Oz, Wonderful Wizard of Oz and posted in Film, L Frank Baum, postaday, Theatre, Thought of the Day, Today's Birthday, United States, Wizard of Oz, Writing. You can follow any responses to this entry through the RSS 2.0 feed.
« Cate Blanchett 5.14.13 Thought of the Day
Studs Terkel 5.16.13 Thought of the Day »