Kurt Donald Cobain was born on this day in Aberdeen, Washington, USA in 1967. Today is the 46th anniversary of his birth.

Cobain came from musical and artistic roots. He had uncles and aunts who played and sang in bands and his grandmother was a professional artist. By four his bedroom looked like an art studio and he could crank out a drawing of his favorite cartoon characters on demand. He could also play piano by ear, sing and play his toy drum kit. But his seemingly idyllic childhood was crumbling at home where his parent’s stormy marriage was coming to a messy end. “I had a really good childhood up until I was nine, then a classic case of divorce really affected me.” [Cobain] After his parents divorce Cobain withdrew and became a moody pre-teen. Both his parents remarried and he felt he didn’t fit with either of the blended families. He began to experiment with drugs in his teens. He got into trouble with the law, and by 1984 he was on his own bouncing from one friend’s couch to the next, sometimes sleeping in apartment hallways and hospital waiting rooms when a friendly sofa wasn’t available.

His love of music and art were always positive outlets in his troubled life. He got a second-hand guitar as a birthday present from an uncle and threw himself into learning how to play. Cobain followed the Pacific Northwest Punk scene, especially the band The Melvins. He met bassist Krist Novoselic through Novoselic’s brother, Robert, a fellow The Melvin’s fan. Both men wanted to start a band. When Aaron Burkhard joined them on drums Nirvana was born. 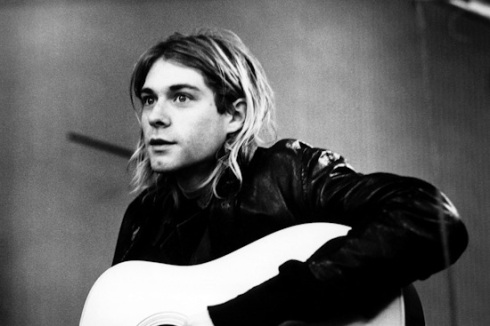 Their first album, Bleach came out in 1989. “Their signature sound, which included elements of punk and heavy metal, was … apparent on the album.” [Biography.com]

Here’s the unplugged version of “About the Girl” from Bleach. [Yeah, I know this a blog about Kurt Cobain, but just take a minute to listen to Novoselic’s awesome acoustic bass guitar line — nice! ]

Dave Grohl had taken over on drums by the time they release their next album.  Their “Grunge” sound continued to evolve with  Nevermind. The single “Smells Like Teen Spirit” launched Nirvana and Nevermind into the Billboard Top 100.

Here’s Smells Like Teen Spirit… [Warning I couldn’t find an unplugged version, so this rocks out.]

And here’s Come As You Are… [Unplugged]

Cobain was suddenly put into the spotlight not just as a musician, but as the poster child for the Grunge movement. He rebelled against the scrubbed alternative version the media seemed to demand of him, and he resented the fans who heard one song (Teen Spirit) and called themselves Nirvana fans.

In an effort to get regain a more natural, raw sound the group put out their third studio album, In Utero. The album is …

Full of highly personal lyrics by Cobain about his many life struggles, the recording featured a fair amount of hostility toward people and situations that Cobain reviled. He took on the recording industry with “Radio Friendly Unit Shifter.” It also had some more tender moments with “Heart-Shaped Box,” which is supposed to be about his marriage to Love. Guitar Player magazine described the album as having “a startling level of anger, energy, and jaded intelligence.”[Biograph.com]

His relationship and marriage to punk rocker Courtney Love garnered even more attention from the paparazzi. He was actively taking drugs (as was she — something that landed the both in trouble with social services when she gave an interview admitting she used heroin while pregnant with their daughter, Francis Bean). The cocktail of media pressure, unhappiness, touring, and drugs proved too much for him. He attempted suicide in March of 1994 while in Rome with Love. He returned to the US and at her urging,  eventually sought treatment for his drug addiction at the Exodus Recovery Center in Los Angeles,, but he only lasted 2 days at the facility before scaling a 6 foot wall to escape. He returned to the Seattle area and took his life in the guest house on his estate. He shot himself with a shot gun.  His body was found three days later along with a lengthy suicide note.

The group released Unplugged in New York shortly after Cobain’s death and it went to the top of the charts. Two years later, a collection of their songs entitled From the Muddy Banks of the Wishkah was released, and again the group scored a huge hit, reaching the number three spot on the album charts. [Biograph.com]

I like Nirvana’s music. I have for a long time. (Although as I mature I’ll admit I like those softer MTV Unplugged versions a bit better than the full-out concert rock versions.)  However…In writing and researching this bioBLOG I got a little icky feeling. In every thing I read Cobain comes off as the great artist who feels too sorry for himself. But why? Because his parents argued in front of him and got a divorce? That’s about half of America isn’t it? It is such a shame that this very talented (very handsome) young man was so determined to be unhappy. Doubly shameful is that he had such easy access to drugs.

Still he, Krist Novoselic, and Dave Grohl made some of the best music of their generation. And for that I salute him. … I think I’ll listen to “All Apologies” to play us out.

Freelance writer, graphic designer, musician, foodie and Jane Austen enthusiast in Northern Baltimore County, Maryland. As a writer I enjoy both fiction and non fiction (food, travel and local interest stories.) As an advocate for the ARTS, one of my biggest passions is helping young people find a voice in all the performing arts. To that end it has been my honor to give one-on-one lessons to elementary, middle and high school students in graphic design and music. And as JANE-O I currently serve as the regional coordinator for JASNA Maryland and am working on a Regency/Federal cooking project. END_OF_DOCUMENT_TOKEN_TO_BE_REPLACED
This entry was posted on Wednesday, February 20th, 2013 at 10:08 pm and posted in Kurt Cobain, Music, Nirvana, postaday, Thought of the Day, Today's Birthday. You can follow any responses to this entry through the RSS 2.0 feed.
« Jeff Daniels 2.19.13 Thought of the Day
John Henry Newman 2.21.13 Thought of the Day »