“I’ve got a lot of friends who make $20 million, and I don’t. I could feel unappreciated. So I fanned those flames [to play the part].” — Jeff Daniels

His family left Georgia when Daniels was an infant eventually landing in Chelsea, Michigan. His father, Bob Daniels owned a lumber yard in the town and was the town’s mayor for a while. Jeff still calls Michigan home. He lives there now with his wife and three kids.

When he was 18, in 1976,  Jeff Daniels was part of a Bicentennial Repertory program at Eastern Michigan University. The guest director for the program, Marshall Mason encouraged him to come to New York where Daniels worked with the Circle Repertory Theatre in The Fifth of July. He won a Drama Desk Award for the play. Other plays, both in New York and in regional theatre followed. 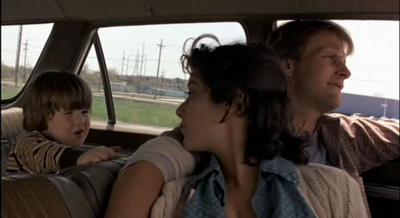 His film premier was in 1981 with Ragtime as P.C. O’Donnell.  He gained a wilder audience as Debra Winger‘s cheating, disengaged, husband Flap Horton in Terms of Endearment. The movie won a slew of awards (including 5 Academy Awards) and raised Daniel’s visibility considerably. In 1985 he teamed up with director Woody Allen for The Purple Rose of Cairo. He played the dual roles of Tom Baxter (literally a character that comes off the screen)  and Gil Shepherd (the actor who plays the character) in the movie. Another terrific movie from his early career is the quirky “romance,” Something Wild.

Daniels is one of those actors who blends so seamlessly with a role that you kind of forget that he’s in a movie. So when you go to the dvd shelf you have a kind of ah-ha moment. This guy has done a LOT of movies.  In part that is by design. He’s never been keen on being a movie star, and has always been content to just be a good actor. He is equally at home with comedy and drama.

He plays the Everyman in mid-America, sometimes a little goofy, like in  Arachnophobia, some times sweet, like his delightful performance in Pleasantville. But watch out, his characters can have a real zing of intellectual ass-hole-ed-ness to them too, like his Bernard Berkman in The Squid and the Whale (I loved the movie, but I didn’t love him.)Last year he starred in the new HBO series Newsroom as Will McAvoy. He is fantastic in the show. The faced paced dialog and occasional rant seem like a dream role for an actor who too often has to dampen down his acting palette to shades a vanilla. It is nice to see him chew a bit a scenery, and in Will McAvoy it really works.

Here’s a link to an NPR Terry Gross interview with Daniels shortly after the debut of HBO’s Newsroom.

Freelance writer, graphic designer, musician, foodie and Jane Austen enthusiast in Northern Baltimore County, Maryland. As a writer I enjoy both fiction and non fiction (food, travel and local interest stories.) As an advocate for the ARTS, one of my biggest passions is helping young people find a voice in all the performing arts. To that end it has been my honor to give one-on-one lessons to elementary, middle and high school students in graphic design and music. And as JANE-O I currently serve as the regional coordinator for JASNA Maryland and am working on a Regency/Federal cooking project. END_OF_DOCUMENT_TOKEN_TO_BE_REPLACED
This entry was posted on Wednesday, February 20th, 2013 at 2:58 am and tagged with Jeff Daniel, Purple Rose of Cairo and posted in Film, Jeff Daniels, postaday, Thought of the Day, Today's Birthday. You can follow any responses to this entry through the RSS 2.0 feed.
« Thomas Cole 2.1.13 REPOST
Kurt Cobain 2.20.13 Thought of the Day »