“I have had dreams and I have had nightmares, but I have conquered my nightmare because of my dreams.”
––Jonas Salk 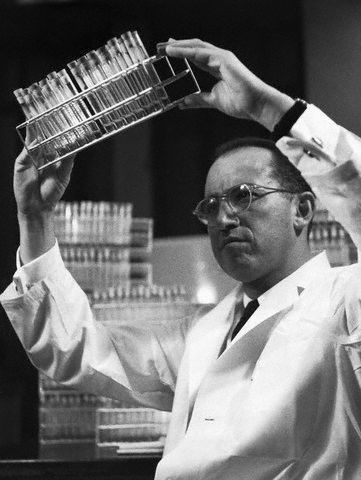 Salk in his University of Pittsburgh  lab. [Image courtesy: ExplorePAHistory.com]

Jonas Salk was born on this day in New York City in 1914 Today is the 98th anniversary of his birth.

He was the oldest of three boys born to Russian/Jewish immigrants, Daniel and Dora Salk. He was an excellent student and he attended Townsend Harris High School, a high school for gifted students and a springboard  for boys who had the talent but not the money or social connections to get into private colleges. At Townsend Harris he read everything he could find, he studied hard and always got good grades. At 16 he started the College of the City of New York. At first he focused on Law, but he soon changed his mind and decided to study medicine.

In 1934 he enrolled in the College of Medicine of New York University, from which he graduated in 1939. Salk worked at New York’s Mount Sinai Hospital from 1940 to 1942, when he went to the University of Michigan. There he helped develop an influenza (flu) vaccine. [Encyclopedia of World Biography]

The flu virus had recently been discovered and Salk worked on a way to “deprived of its ability to infect, while still giving immunity to the illness.” [Academy of Achievement]  His work in fighting the flu and in developing vaccines helped prevent a repeat of the flu epidemic like the one that ravished the country in 1919.

In 1947, Salk accepted an appointment to the University of Pittsburgh Medical School. While working there, with the National Foundation for Infantile Paralysis, Salk saw an opportunity to develop a vaccine against polio, and devoted himself to this work for the next eight years. [Academy of Achievement]

At Pittsburgh he researched the polio virus (in 1949 it was discovered that there were three types of polio viruses) and he worked on a vaccine that tackled the disease. By 1950 testing began, in 1955 the vaccine was ready for general use. Salk had developed a “killed-virus” vaccine that required three or four injections.

In countries where Salk’s vaccine has remained in use, the disease has been virtually eradicated. [Ibid] Salk won the Lasker science award in 1956 for his work on Polio.

The Salk Institute for Biological Studies, which focused on the autoimmune functions of the body opened in San Diego, California in 1963.  While heading up the institute Salk published Man Unfolding (1972), The Survival of the Wisest (1973), World Population and Human Values: A New Reality (1981), and Anatomy of Reality (1983).

Towards the end of his life Dr. Salk took up the fight against AIDS and searched for an effective vaccine for the disease.

Freelance writer, graphic designer, musician, foodie and Jane Austen enthusiast in Northern Baltimore County, Maryland. As a writer I enjoy both fiction and non fiction (food, travel and local interest stories.) As an advocate for the ARTS, one of my biggest passions is helping young people find a voice in all the performing arts. To that end it has been my honor to give one-on-one lessons to elementary, middle and high school students in graphic design and music. And as JANE-O I currently serve as the regional coordinator for JASNA Maryland and am working on a Regency/Federal cooking project. END_OF_DOCUMENT_TOKEN_TO_BE_REPLACED
This entry was posted on Sunday, October 28th, 2012 at 9:12 pm and tagged with Jonas Salk, Salk Institute for Biological Studies and posted in American History, Jonas Salk, Medicine, postaday, Thought of the Day, Today's Birthday, Uncategorized. You can follow any responses to this entry through the RSS 2.0 feed.
« Thought of the Day 10.27.12 Desiderius Erasmus
Bonus Thought of the Day…Sandy »