“The big artist keeps an eye on nature and steals her tools.” –Thomas Eakins

Thomas Cowperthwait Eakins was born on this day in Philadelphia, PA in 1844.

Today is the 168th anniversary of his birth. He went to the Pennsylvania Academy of the Fine Arts  and attended classes on anatomy at Jefferson Medical College. He spent a few years abroad studying in Paris and Spain then returned home to Philadelphia. He worked in watercolor, oil and photography to capture realistic landscapes and the human figure. He taught at the Pennsylvania Academy stressing the importance of realism. He  ran into trouble with Victorian sensibilities with his emphasis on using nude subjects and was forced to retire from that institution.

John Biglin in a Single Scull, ca 1873 by Thomas Eakins a Watercolor on paper

Early paintings reflected things he liked to do like rowing on the Schuykill river. He also painted portraits of women and children (usually of family or friends) at home in intimate, shadowed settings. 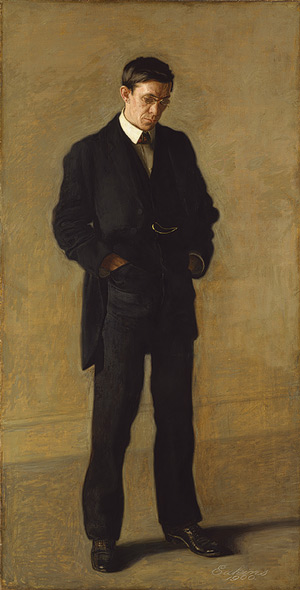 The Thinker: Portrait of Louis N. Kenton, 1900 by Thomas Eakins, Oil on Canvas.
Kenton was Eakin’s brother-in-law. The painting is 82 x 42″ and is in the New York Metropolitan Museum of Art.

During his lifetime his was not well received in the art world. His portraits — he painted several hundred of them — were rarely done on commission and  were often painted to scale, inside  and in isolation. He was also very interested in science and medicine (especially anatomy) as is reflected in two of his most famous works The Gross Clinic and The Agnew Clinic.

Freelance writer, graphic designer, musician, foodie and Jane Austen enthusiast in Northern Baltimore County, Maryland. As a writer I enjoy both fiction and non fiction (food, travel and local interest stories.) As an advocate for the ARTS, one of my biggest passions is helping young people find a voice in all the performing arts. To that end it has been my honor to give one-on-one lessons to elementary, middle and high school students in graphic design and music. And as JANE-O I currently serve as the regional coordinator for JASNA Maryland and am working on a Regency/Federal cooking project. END_OF_DOCUMENT_TOKEN_TO_BE_REPLACED
This entry was posted on Wednesday, July 25th, 2012 at 1:00 pm and tagged with Thomas Eakins and posted in Art, postaday, Theatre, Thomas Eakens, Today's Birthday. You can follow any responses to this entry through the RSS 2.0 feed.
« Romeo and Juliet and Benvolio and Mercutio
Thought of the Day 7.26.12 »