Today we’ll  touch on some odds and ends in Williamsburg and travel down the road to the current capital of Virginia, Richmond.

11. Stop in to see the craftsmen making things with wood.  Bill likes woodworking so we spent time at the joiners near the Capitol on Frances Street…

Saw envy at the Joiners.

Where they do ordinary work, like making sashes for windows and  bellows for the Gunsmith Shop….

Making 1 of three large wooden panels for the bellows.

The craftsmen at the Joiners used a lot of fine carving skills to make this wooden ornamental panel.

We also went to the Cabinetmaker’s shop, which is on Nicholson Street, closer to the Palace Green.

Bill has a talk with one of the cabinet makers.

Both shops had beautiful sets of hollows and rounds for making moldings.

Hollow and round plane sets on the shelf.

12.) Get your Ps and Qs in line at the Printers. Bill indulged my love of graphic design with a trip to the Printers. We had a nice long talk with printer and he was kind enough to let me have a go at the press.

First I inked the plate. 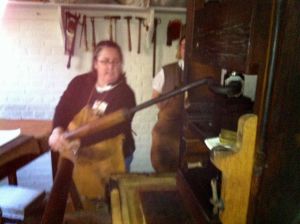 Added paper, cranked the carriage into place then PULLED the press down. 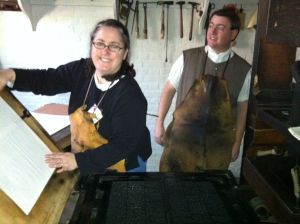 Cranked the carriage back out and lifted the paper tray and… 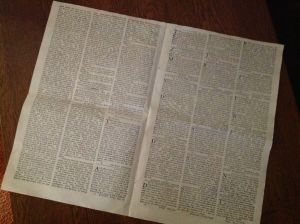 Taadaaa… my impression of a colonial paper. (Get it? IMPRESSION? It’s a letter-press. Never mind, it’s a printing joke.)

13.) Stroll along Duke of Gloucester Street. We  especially enjoyed the Blacksmith, the Silversmith and the Milliner.

The Milliner shows off a hat that would have been popular around 1790. I like to think of it as a Mrs. Bennett or Mrs. Dashwood appropriate hat. (Yes that is Jane Austen reference.)

14.) Stand witness for the prosecution at the Courthouse. Learn about the 18th Century justice system first hand with the Order In The Court program (it runs several times a day and is free with your Williamsburg pass).

The Williamsburg Courthouse is one of the original buildings and was still in use when Goodwin and Rockefeller began to rebuild the town. 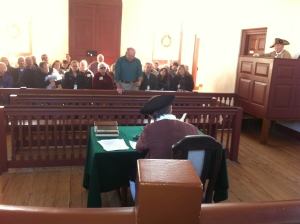 A Williamsburg visitor takes on the roll of a towns person who has failed to come to church — an offense which was against the law.

You MIGHT even get a chance to be on the judge’s bench (even if you’re a woman == as long as you go along with premise that you are a man for the purposes of historical accuracy.) 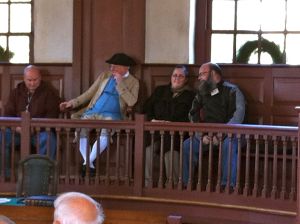 Yes, that’s judge Rita conferring with the bearded judge to the right on the fate of some poor soul. Don’t worry I was very easy. Every body else was a hangin’ mood, but not me.

15. EAT. There are four Colonial Taverns to choose from in the city, Christiana Campbell’s, Shield’s, King’s Arms, and Chownings. I liked King’s Arms the best because they have an amazing Peanut Soup.  Dinner at any of the Taverns is by candle light and includes period entertainment, but be warned … it will be an expensive meal. You might choose to eat at one of the restaurants at Merchant’s Square  (which is between Colonial Williamsburg and Williams and Mary. The bus that runs in a clockwise circle around the historic district has a stop at Merchants Square so you wont have to get in your car.) We liked the Cheese Shop on the square, and especially the Aroma Coffee Shop on Prince George Street. If you do decide to step into your horseless carriage just go out Richmond Road and you’ll find the usual suspect of chain eateries, an oddly prolific collection of pancake establishments and some rather nice restaurants of the non-chain variety (yes, there are still some of them out there.) We enjoyed sushi at Kyoto and American fare at Food for Thought (the best food I ate all week was the Food for Thought’s quinoa salad.)

Time to travel down the road and into the present, leaving 18th Century Williamsburg for 21st Century Richmond. Well, almost… there’s still a lot of history to explore on this trip.

Richmond is the capital of Virginia and during the American Civil War it was the Capital of the Confederacy. The city is ripe with monuments & museums to the South (and given the whole Slavery thing, that made me a mite itchy. But I do love my history, so…) While in the city you can visit the Museum and White House of the Confederacy, the Virginia Historical Society,  Hollywood Cemetery or take a stroll down Monument Avenue.

We went to Tredegar Iron Works on the James River. You get two museums in one location here. One is run by the National Park Service and the other is part of the American Civil War Center. We went into the (free) Park Service museum and enjoyed the displays and movie on the third floor. The Map Room is a great way to orient yourself on Richmond’s role in the war.

Photograph of the Tredegar Iron Works, shortly after the Evacuation Fire of 1865; despite the original caption of the image, the works themselves survived largely unscathed. (Photo credit: Wikipedia)

The outdoor exhibits had seen better days, but this museum is a gem in the rough. I hope they get some funding and can restore all the exhibits to top-notch condition.

Next stop: Shopping. Carytown  is Richmond’s “Mile of Style” and we enjoyed a mild weather stroll down the main drag of boutiques and unique shops. This quaint shopping district won Southern Living Magazine’s “Best Neighborhood to Shop In” nod by the magazine’s readers.

We ate at the Can Can Brasserie a beautifully restored building that made you feel like you’d stepped off the streets of Paris. I kept expecting to see Henri de Toulouse-Lautrec stroll by the table. The atmosphere was delightful, so was the food (I got half a Roast Chicken Salad and a half order of their Roasted Apple & Rutabaga Soup. ) And don’t forget to order a Eloise (their special version of a Shirley Temple.)

But our big find in Richmond, besides the wonderful company, was the Virginia Museum of Fine Arts… which I will talk about tomorrow.