By ritalovestowrite
“If you’re willing to fail interestingly, you tend to succeed interestingly.”–Edward Albee

Edward Harvey was born on this day in Washington, DC in 1928. He is 85 years old.
When he was 2 weeks old he was adopted by Reed and Frances Albee. The family moved to Larchmont, New York soon afterward. The Albees had a theatre pedigree. Grandfather Edward Franklin Albee II  was the owner of several theaters, part of the Keith-Albee chain. With its roots in vaudeville the theatres hosted touring companies and eventually made the leap to movies. The company merged with two other companies and became RKO pictures….and the Albees were set for life.
Albee grew up in an affluent family. He had access to the stage from a young age and his love of theatre and art was well founded from his childhood. He did not do well at school. He was rebellious, and he was expelled from a number of public, private and military schools.

Almost from the beginning he clashed with the strong-minded Mrs. Albee, rebelling against her attempts to make him a success as well as a sportsman and a member of the Larchmont, New York, social set. Instead, young Albee pursued his interest in the arts, writing macabre and bitter stories and poetry, while associating with artists and intellectuals considered objectionable by Mrs. Albee. [The Kennedy Center. org]

After he dropped out of Trinity College in his sophomore year he had a rift with his family. (He never saw his father again.) He moved to New York’s Greenwich Village and lived on a small inheritance and by doing odd jobs — like delivering telegrams — while honing his writing skills. Albee tried his hand at poetry and fiction before finding his groove as a playwright.

In 1959 his first play, The Zoo Story was produced in Berlin, Germany. I came to New York, Off-Broadway in 1960. The Zoo Story is a one-act play “in which a loquacious drifter meets a conventional family man on a park bench and provokes him to violence” [Academy of Achievement]  Other one acts and short dramas followed including : The Sandbox, The American Dream and The Death of Bessie Smith.

By 1962, he was ready to storm Broadway, the bastion of commercial theater in America. His first Broadway production, Who’s Afraid of Virginia Woolf?, was a runaway success and a critical sensation. The play received a Tony Award, and Albee was enshrined in the pantheon of American dramatists alongside Eugene O’Neill, Arthur Miller and Tennessee Williams. [Academy of Achievement] 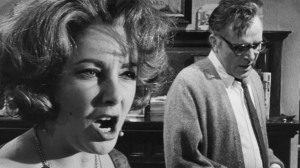 Elizabeth Taylor and Richard Burton in the movie version of Who’s Afraid of Virginia Woolf (Image courtesy: The Movie Jerk]

His first Pulitzer Prize came for the 1966 drama A Delicate Balance.  Albee won his second Pulitzer in 1975 with Seascape, “which combined theatrical experiment and social commentary in a story about a retired vacationing couple who meet a pair of sea lizards at the beach.” [The Kennedy Center. org] “As bizarre as the idea sounded on first hearing, the result was both humorous and moving. The play charmed audiences and critics…” [Academy of Achievement]

After Seascape the theater critics, unexpectedly, fell out of love with Albee. For nearly two decades he struggled to get the audiences and critical praise he deserved.

In an era of Hollywood-style “play development” by committee, Albee has remained an uncompromising defender of the integrity of his own texts, and a champion of the work of younger authors. Over the years, he has scrupulously reserved part of his time for the training of younger writers. He has conducted regular writing workshops in New York, and … taught playwriting at the University of Houston. He has persistently asked young writers to hold themselves to the highest artistic standards, and to resist what he sees as the encroachment of commercialism on the dramatic imagination.  [Academy of Achievement]

In 1994 he was back with Three Tall Women. The play won Albee his third Pulitzer. “In 1996, Albee was one of the recipients of the Kennedy Center Honors and was awarded the National Medal of Arts.” [Ibid] The triumph of Three Tall Women launched the second act for the playwright who saw The Play About the Baby, The Goat or Who Is Sylvia? (Tony Award / Drama Desk Award) and  Occupant (the story of artist Louise Nevelson*), hit the Great White Way within a decade.  Next Albee reworked The Zoo Story in Homelife and presented both plays as Peter and Jerry.

Cover of The Play About The Baby

He was honored with a Special Lifetime Achievement Tony Award  in 2005.

At 85 Albee continues to write for the stage.