Thought of the Day 9.27.12 Clementine Paddleford

“Never grow a wishbone, daughter, where you backbone ought to be.”
–– Clementine Paddleford 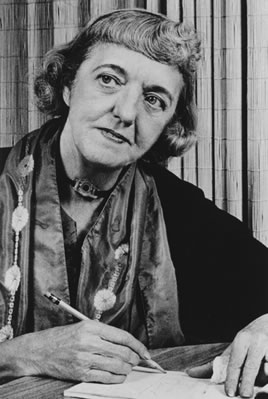 Clementine Paddleford was born on this day in Stockdale (near Manhattan), Kansas in 1898. She grew up with a strong connection to the land and people who tilled it. 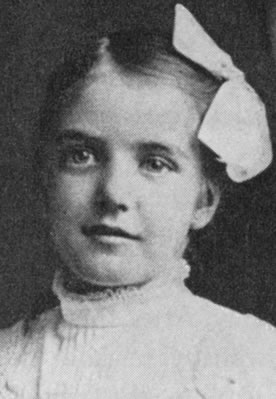 She rode a horse to school, where she learned to love writing at an early age. She loved food too. She learned to cook by her mother’s side in their Kansas kitchen.

In a memoir called “A Flower for My Mother,” she wrote of fresh-picked corn and strawberries, ice cream made from new-fallen snow. [A Life in the Culinary Front Lines, by R.W. Apple, Jr, 11/30/05 The New York Times]

At 15 she worked for the Manhattan (Kansas) Daily Chronicle writing “personals” — She would borrow the family car and go down to the meet the 4 A.M. train for Kansas City and report  on which locals got on the train. It wasn’t journalism at its finest, but it was her first paid gig. She went to Kansas State Agriculture College and graduated in 1921 with a degree in Industrial Journalism. Industrial Journalism was a “boys club,” most women took home economics, and Paddleford was a trailblazer.

She moved from Manhattan, Kansas to Manhattan, New York and attended the Columbia School of Journalism at night while she worked reviewing books for Administration (a business magazine) and the New York Sun during the day. She specifically requested lengthy, more difficult, scientific books because, although she only earned $3 or $4 for a review, she could usually sell the book for $5 to a dealer. She also wrote women’s features for the New York Sun and the New  York Telegram. 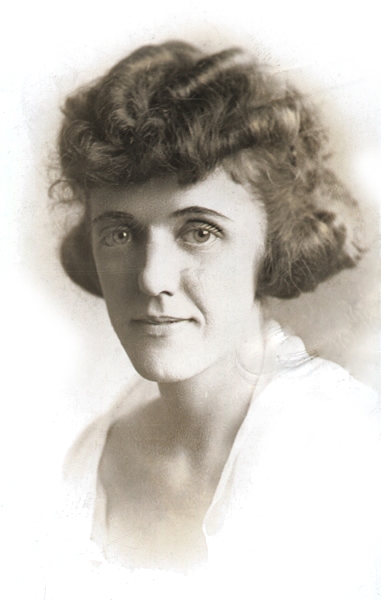 Later Paddleford became the woman’s editor for Fame and Fireside working there until 1929. When a change of management led to her leaving the publication she began to write on a freelance basis, mostly about food. 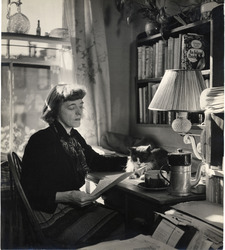 At 34 she was hospitalized for a malignant tumor on her larynx. She had the growth removed, along with her vocal chords. The operation left her with a breathing tube, and she had to re-learn how to talk. Her voice was never the same and she declined to speak in public after the operation. As for the breathing tube? She took it in stride.

She disguised the tube with a velvet choker that became part of her trademarked look and continued with her work. [the Found Recipe Box]

She worked as a food editor at the New York Herald-Tribune for 30 years from 1935-1966 bringing her signature editorial point of view to reviews and recipes. She made…

forty dollars a week to write six half-columns of advice to New York housewives on buying and eating. The job sounded like a cinch to Paddleford. Half a column a day shouldn’t take more than a couple of hours. And forty dollars was bread and butter. But what with her conscientiousness and her growing interest in the job, it wasn’t long before she was putting in as much as twelve hours a day combing food markets and writing the column. [Clementine Paddleford: her Passion is Food, by Josef Israels II, K-State Libraries; ]

She also did a weekly column at This Week Magazine and a monthly column for Gourmet Magazine. At her peak in the 1950’s and 1960’s she had 12 million readers. 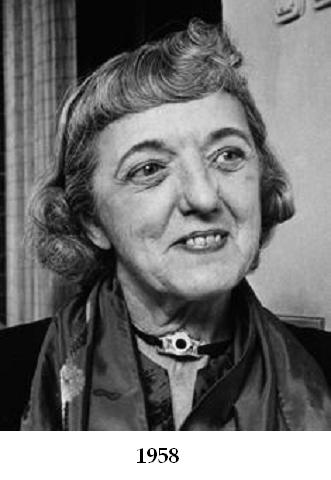 Prior to Paddleford, food was treated in a dry academic manner. A recipe was just a list of numbers… x amount of flour… z amount of time in the oven… Paddleford brought the  food life. She told a story around the recipe.

Before Paddleford, newspaper food sections were dull primers on home economy. But she changed all of that, composing her own brand of sassy, unerringly authoritative prose designed to celebrate regional home cooking…[from the book description of Hometown Appetites: The Story of Clementine Paddleford]

We opened the mail one morning to learn a barrel of frogs’ legs… was coming our way. They came. We gave half of them away and cooked the rest for an important little dinner for three. The very thought of frogs’ legs sent memories reaching back to our first interest in the “greenies”—as we used to call frogs. Then we children were the hunters along the banks of a creek out Kansas way. We were small savages with clubs who caught froggies with a wallop over their noggins, took them home, and ate the shanks, a choice morsel. We’d wind up with only a few mouthfuls after a couple of hours’ work, but it seemed worth the effort. [Food Flashes, Clementine Paddleford, March 1951, Gourmet Magazine]

Paddleford was a food explorer too. She loved to go to remote places and discover the local cuisine. She learned to fly so she could get to places more quickly. She even had dinner on a nuclear submarine to see what the sailors had in the mess hall. (She came away from the encounter with a recipe for hamburger pie for 100 and one for brownies for 80.)

Well, I couldn’t write about Clementine Paddleford without sharing one of her recipes. Here is Hurry-Up Marble Cake…

Here’s an old-time marble cake with a new-time trick, one double quick–no splitting the batter. Use your spatula as a wand–marbleize by magic. Pour the batter into layer-cake pans, drizzle over syrup made without cooking, using a ready-prepared cocoa. Swirl the spatula through the layers and dark chocolate spirals will show when the cake’s cut. The same method can be used to marbleize the frosting. Another day bake the marble loaf.

Combine cocoa and water; stir until smooth. Set aside. Sift together flour, baking powder and salt. Combine shortening and vanilla. Gradually add sugar and cream well. Add egg yolks and egg, one at a time, and beat well. Add flour mixture alternately with milk. Pour into 2 9-inch round cake pans lined with wax paper. Drizzle cocoa mixture back and forth over both layers. With a spatula or knife, “swirl” through batter to marbleize. Bake at 325°F. 25 to 30 minutes. Cool in pans 10 minutes. Remove from pans, peel off paper. Cool thoroughly. Frost with marble frosting. Yield: 1 9-inch layer cake.

Combine 1/2 cup instant sweet milk cocoa with 2 tablespoons boiling water and stir until smooth; set aside. Combine 2 egg whites, 1/3 cup water, 1 1/2 cups sugar and 2 teaspoons white corn syrup (or substitute 1/8 teaspoon cream of tartar) and beat constantly over boiling water with rotary beater for 7 minutes, or until frosting holds its shape. Remove from water and beat for 2 minutes. Pour cocoa mixture over top of frosting in double boiler; do not stir. Spread between layers and on top and sides of cake. Frosting will become marbleized when spread.