n”I only achieve about 60 per cent of what I’ve dreamed of. Perhaps that’s a good thing – if I did ever get the whole way with anything, I think I’d probably want to destroy it.”

On the set of Australia [Image Courtesy: The Play List]

Mark Anthony Luhrmann was born on this day in Sydney, Australia in 1962. He is 50 years old.

His mother, Barbara, owned a dress shop. His father, Leonard, was a farmer and owned a gas station and movie theater in the small town of Herons Creek near where they lived. Barbara and Leonard competed in ballroom dance competitions and Barbara taught ballroom dance at a local studio.

“What kind of kid was I? …Extremely busy. My father was a bit mad, you see. He thought that we had to be the renaissance kids of Herons Creek. We had to learn commando training as well as photography, how to grow corn as well as how to play a musical instrument. We were up at 5 in the morning, and then we just went until we dropped. The town consisted of a gas station, a pig farm, a dress shop and a movie theatre – and we ran them all.” [Baz Luhrmann, as quoted on Baz the Great! fansite]

Growing up the Luhrmann kids helped run the various family businesses. In their free time they rode horses, learned to ballroom dance (of course), and made amateur movies. As a gas jockey at the service station Mark saw a stream of people  pass through. He was invisible to them, and  so was able to observe  their stories unfiltered and unedited for the 5 minutes it took to fill up their tank.  Later, after his parents divorced he eventually found himself in Sydney. Prior to the move he (and his brothers) had to keep their hair closely cropped in a buzz cut, but once in Sydney he was allowed grow it out. When he was teased that his new hair do made him look like a puppet fox on TV, Basil Bush, he embraced the  taunting and officially changed his first name to Bazmark.  In high school he acted in Henry IV, Part 1.  And at 17 he got a role in the Judy Davis, Bryan Brown film The Winter of Our Dreams.

He worked with the Australian Opera to bring in a younger audience and directed and performed in a number of stage productions for the company.

Luhrmann mounted productions of La Boheme, A Midsummer’s Night’s Dream and other classics in modern or unusual settings. 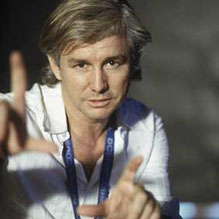 His break out film was Strictly Ballroom. The project began as a 30-minute play, but Luhrmann developed it into a full blown motion picture in 1992. The story centers around handsome, spoiled, Scott. He’s a leading ballroom dancer who’s set to win the Pan-Pacific Ballroom Championships. But Scott wants to break the rules and dance his own steps. Enter Fran, a shy, ugly duckling of a girl from the beginner class at his mother’s studio. He teaches her how to dance and along the way she teaches him a thing or two as well. It’s quirky, funny, over the top, and wonderful. Here’s a scene about mid-way through the movie:

It is the first of his Red Curtain Trilogy.  Romeo + Juliet and Moulin Rouge! round out the trio. Luhrmann describes a Red Curtain film as having the following attributes:

The success of Strictly Ballroom  brought Luhrmann to the attention of 20th Century Fox  who signed him to a 3-year deal. For second movie Luhrmann gave Romeo + Juliet a modern jump. It starred Leonardo DiCaprio and Claire Danes and is both fast paced and action packed.  In both style and weirdness factors there is a 15% increase from Ballroom, but still, it works.

“. . . if you make a film full of risk, studios don’t run towards you to give you $50,000,000 in order to reinvent the post-modern musical, I can tell you. If you do manage to cajole them into doing it and you want to maintain the flag of creative freedom, you better make sure that it pays its bill.”[Baz Luhrmann, IMDB]

It was somehow even bigger and stranger than J + R and Ballroom put together. With an odd combination of modern songs (with modified lyrics) that should not have fit in the 1900 Paris setting, this musical had no business becoming a hit. But it did. Frankly, once Ewan McGregor opened his mouth to sing… nothing else seemed to matter.  (As is evidenced by the bizarre beginning of this clip… Here McGregor’s Christian has snuck into courtesan Satine’s room. He is a penniless writer and he tries to win her over with the strength of his prose [well, in this case it’s Elton John’s lyrics] Kidman feign’s over excitement, hoping to get the shy wordsmith to leave, but then he starts to sing and the movie, and their attraction,  takes off.)

For his next project he brought  La Boheme to Broadway.  The show opened on December 8, 2002 and was declared a “brilliant reworking of Puccini’s masterpiece that appealed to all. [Baz the Great! fansite]

In 2008 he teamed with Kidman again, this time pairing her with Hugh Jackman, in the epic WWII Aussie drama, Australia. It’s beautifully shot. From a cattle drive worthy any Western… to the Japanese attack on Darwin… to the love story, Australia has a lot going for it. (But be warned it is a bit preachy too.)

Luhrmann’s latest project is Gatsby. This time he re-teams with DiCaprio. This stylish take on the Fitzgerald’s classic, The Great Gatsby is due out on Christmas Day. [Don’t buy your tickets just yet… seems like the release date has been pushed back to Summer 2013 — thanks to John for the heads up. ]