“Everything we see hides another thing, we always want to see what is hidden by what we see.” — Rene Magritte

The Magician Self Portrait With Four Arms [Image courtesy: rene-magritte.net]

René François-Ghislain Magritte was born on this day in Lessines, Belgium, in 1898. Today is the 115th anniversary of his birth.


He was the eldest of three boys born to  Leopold and Regine Magritte. He liked drawing from an early age and began to take lessons  at 12.  At 14 his world was turned upside down when his mother, who…

suffered from depression… fled to go to throw herself over a bridge, into the river Sambre. A few days later, her body is found floating, her face covered by her nightgown; René… was deeply scarred by the image, which was later going to reappear in some of his works (The Heart of the Matter). [famouspainter.com]

In 1914 he entered the Academy of Fine Arts in Brussels to learn traditional painting techniques.  His “plan was to master these techniques before breaking free of them.” [Ibid] While at the Academy he was influenced by the Futurist, Cubist and Surrealist movements.  Because of the later, “Magritte decided to make each of his painting a visual poem.” [Ibid]

He began to work professionally and by 1927 had joined other Surealist artists (like Salvador Dali) . His first one-man show in Brussels was not a critical success in conservative Brussels, and he moved to Paris.

What set him apart from the other surrealists was his technique of juxtaposing ordinary objects in an extraordinary way; while Dali would “melt” a watch, playing with the consistency of an object (amongst other things), Magritte would leave objects intact, but play with their placement in reality, playing with logic. This technique is sometimes called Magic Realism. [famouspainter.com]

His witty and thought-provoking images and his use of simple graphics and everyday objects”… gave  “new meanings to familiar things.” [Biography.com] 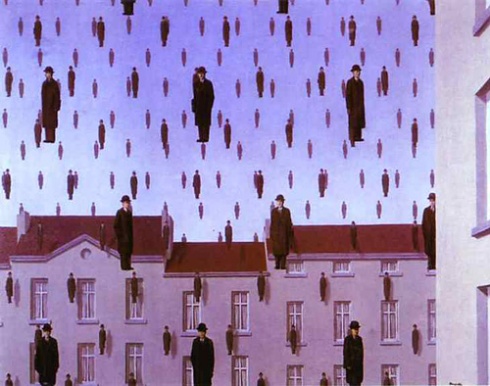 The Month of the Grape Harvest, 1959 [Image courtesy: rene-magritte.net]

This is Not an Apple, 1964 [Image courtesy: rene-magritte.net]

Freelance writer, graphic designer, musician, foodie and Jane Austen enthusiast in Northern Baltimore County, Maryland. As a writer I enjoy both fiction and non fiction (food, travel and local interest stories.) As an advocate for the ARTS, one of my biggest passions is helping young people find a voice in all the performing arts. To that end it has been my honor to give one-on-one lessons to elementary, middle and high school students in graphic design and music. And as JANE-O I currently serve as the regional coordinator for JASNA Maryland and am working on a Regency/Federal cooking project. END_OF_DOCUMENT_TOKEN_TO_BE_REPLACED
This entry was posted on Friday, November 22nd, 2013 at 1:57 am and tagged with René Magritte, Surrealism and posted in Art, postaday, Thought of the Day, Today's Birthday. You can follow any responses to this entry through the RSS 2.0 feed.
« Thinking about Neo the 8″ tall antelope
Secondary Character Saturday: Roger Hamley (Wives and Daughters) »