For today’s blog I’d been thinking of doing a humorous screen play about the epic turf war between lady bugs and stink bugs currently raging on rural barn sidings, screened porches, and front doors  across the Mid Atlantic. As the temperature dances from hot to cool to hot and back, and the crops that acted as their summer homes are harvested, these poor winged creatures don’t seem to know what to do. The one thing they DO seem bent on doing is grossing me out. One stink bug… I can deal with that. A couple of lady bugs… we’ll call it a picnic. But depending on the temperature and location it’s like a scene from the Ten Commandments out there.

So, yeah… I was going to write something funny along the lines of West Side Story where the gangs are the Lady Bugs and the Stinkers (Stink Bug, Stink Bug, crazy Stink Bug — get cool Stink Bug! Da, da, da, do, da, do, dum.)

… But then I drove home from the library.

On the roughly three-mile stretch of black top from the library to my house I saw several dozen Wooly Bear Caterpillars crossing the road. All of them  curiously following the same straight line. All moving fast enough for me to notice the path their little bodies were taking as I sped along at 45 mph. They were like zombie Woolies, mindlessly following some greater command.

This, I quickly realized, would make a much better bug movie script… I mean blog post.

Wooly Bear Caterpillar 1 greeted me In the drive way.

Mention “Wooly Bear Caterpillars” and the first thing people think about is not — oddly enough — a zombie bug apocalypse, but, the long-held myth that the fuzzy little creatures can tell how cold the upcoming winter will be. Some folks think a wide band of copper means a long hard winter. Others think a skinny band of copper and wider bands of black at the ends of the caterpillar indicates a rise in fleece and down-filled jacket sales. Actually it is neither. The change in coloration is due to the AGE of the caterpillar. The older the little fuzzy fella is the more black he will have at his polar regions. So IF Mr. Wooly is a weather indicator he is of the retro variety. If you see one with a lot of black (and a small band of copper) in the spring he has been in the caterpillar stage for a long period of time, because the temperatures have remained cold well into April. 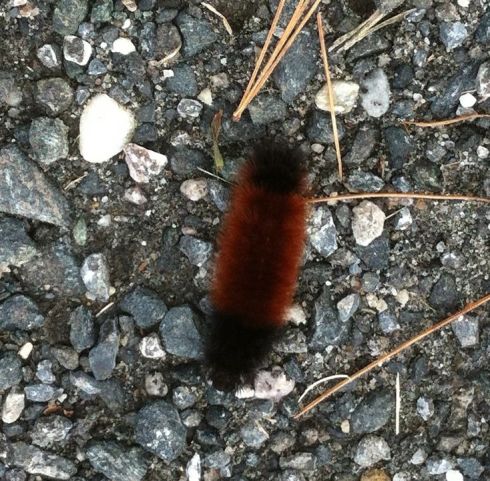 So are Wooly Bears actually wooly? No. The black and red bands are considered BRISTLES. And, as any one who knits can tell you… wool good… bristles… err, not so good. Know the difference.

Is the Wooly Bear named Wooly Bear because it looks like a wooly bear? If you think bears are 2″ long and oval in shape, then, YES. I’ll give you, they do LOOK furry, but THIS is a bear…

THIS is a caterpillar…

To further research “Wooly Bears Attack! The Movie” the dog and I kept a look out for the traveling hoards of caterpillars during our walk. [That’s where I took these photos. All the Wooly photos on this blog may look like one caterpillar model cleverly posed in different gravelly locations, but actually each photo is of a different W.B. actor. (And these were just a few of the ones we saw).]

It seems they are looking for a nice place to weather the winter.

Mature woolly bears search for overwintering sites under bark or inside cavities of rocks or logs. (That’s why you see so many of them crossing roads and sidewalks in the fall.) … When spring arrives, woolly bears spin fuzzy cocoons and transform inside them into full-grown moths. [Almanac.com]

Ah Ha! So the mystery of the zombie caterpillar road crossing is solved. And I think the only thing they are really predicting is that we’ll have lots of fuzzy cocoons next spring.

Wooly bear caterpillar 7 (This one was frightened by the dog.) 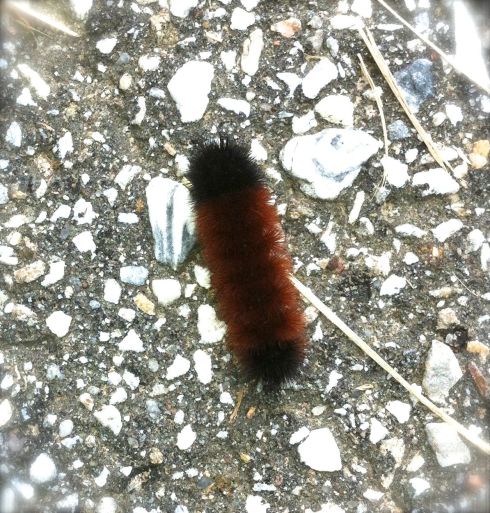 OK  Which fuzzy critter do you like the best? Vote on your favorite Wooly Bear, leave a comment below. Cheers, Rita

Freelance writer, graphic designer, musician, foodie and Jane Austen enthusiast in Northern Baltimore County, Maryland. As a writer I enjoy both fiction and non fiction (food, travel and local interest stories.) As an advocate for the ARTS, one of my biggest passions is helping young people find a voice in all the performing arts. To that end it has been my honor to give one-on-one lessons to elementary, middle and high school students in graphic design and music. And as JANE-O I currently serve as the regional coordinator for JASNA Maryland and am working on a Regency/Federal cooking project. END_OF_DOCUMENT_TOKEN_TO_BE_REPLACED
This entry was posted on Friday, October 18th, 2013 at 4:15 pm and tagged with Pyrrharctia isabella, Wooly Bear Caterpillar and posted in Nature, postaday, Thought of the Day, Writing. You can follow any responses to this entry through the RSS 2.0 feed.
« Dwight Eisenhower 10.16.13 Thought of the Day
Secondary Character Saturday: Mr. Roat (Wait Until Dark) »