“I allow myself to be understood as a colorful fragment in a drab world.”

“It isn’t what they say about you, it’s what they whisper.”

“By instinct I’m an adventurer; by choice I’d like to be a writer; by pure, unadulterated luck, I’m an actor.”

Errol Leslie Thomson Flynn was born on this day in Hobart, Tasmania, Australia in 1909. Today is the 104th anniversary of his birth.

Son of Theodore and Lily Mary “Marelle” Flynn, Errol had a knack for adventure and trouble,

Young Flynn was a rambunctious child who could be counted on to find trouble.
Errol managed to have himself thrown out of every school he was enrolled in. [IMDb]

That included Sydney Church of England Grammar School, the Shore School, which he managed to get expelled from for both fightiing and for having a romanitic assignation with the school’s laundress. [Per his autobiography “My Wicked, Wicked Ways”]

he set out to find gold, but instead found a series of short lived odd jobs. Information is sketchy, but the positions of police constable, sanitation engineer, treasure hunter, sheep castrator, shipmaster for hire, fisherman, and soldier seem to be among his more reputable career choices. [Ibid]

By the early 1930s he was in England, and by 1933 his good looks, atheletic ability, and smooth voice had landed him a gig with the Northampton Repertory company. That same year he appeared in his first movie as Fletcher Christian on In the Wake of the Bounty. (Ironically, Flynn claimed that his mother descended from a midshipman of the Bounty).

Now that he had his sea legs under him, Warner Brothers signed him to a contract and he moved to America to star in Captain Blood.

He quickly rocketed to stardom as the undisputed king of swashbuckler films, a title inherited from Douglas Fairbanks, but which remains his to this day. Onscreen, he was the freedom loving rebel, a man of action who fought against injustice and won the hearts of damsels in the process. [Ibid]

He wasn’t fulfilled with the roles Hollywood was offering him.  Of the well over 50 movies he made he said, “I’ve made six or seven good films – the others, not so good.” He also noted, “I felt like an impostor, taking all that money for reciting ten or twelve lines of nonsense a day.” Off Screen he ran at life full throttle. He drank hard, romanced the ladies (especially the young ladies) and self-medicated with both legal and illegal drugs.  He lead –as author Benjamin S. Johnson put it–an “Errolesque” life. His hard living eventually caught up to him. His youthful, handsome face gave way to a puffy lined one. He was no longer able to do his own stunts. Roles came fewer and father between.  “A few good roles did come his way late in life, however…” [IMDb]  and he was finally “making a name as a serious actor before his death.” [Ibid] The Sun Also Rises (1957) was, perhaps the best performance of his career. 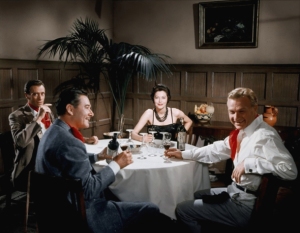 Flynn died  on October 14, 1959 of  myocardial infarction, coronary thrombosis, coronary atherosclerosis, liver degeneration, liver sclerosis and diverticulitis of the colon. Allegedly his last words were “I’ve had a hell of a lot of fun and I’ve enjoyed every minute of it.” He was 50 years old. Freelance writer, graphic designer, musician, foodie and Jane Austen enthusiast in Northern Baltimore County, Maryland. As a writer I enjoy both fiction and non fiction (food, travel and local interest stories.) As an advocate for the ARTS, one of my biggest passions is helping young people find a voice in all the performing arts. To that end it has been my honor to give one-on-one lessons to elementary, middle and high school students in graphic design and music. And as JANE-O I currently serve as the regional coordinator for JASNA Maryland and am working on a Regency/Federal cooking project. END_OF_DOCUMENT_TOKEN_TO_BE_REPLACED
This entry was posted on Thursday, June 20th, 2013 at 11:45 pm and tagged with Errol Flynn, Hollywood and posted in Errol Flynn, Film, postaday, Thought of the Day, Today's Birthday, United States. You can follow any responses to this entry through the RSS 2.0 feed.
« Farm Fresh Challenge — Fennel meet Orange
Fiction Friday — “Fairly Really Worth Sufficient For Me” »