Hortense E de Beauharnais was born on this day in Paris, France in 1783. Today is the 230th anniversary of her birth.

She was born to French aristocrats Alexandre, Vicomte de Beauharnais and Joséphine Tascher de la Pagerie. Both her parents were arrested during the French Revolution, and her father was guillotined at the Place de la Révolution on July 23, 1794. Josephine was released in August of that year. In 1796 she married Napoleon Bonaparte.

Hortense was a pretty child. She had long blond hair and blue eyes. She attended school Napoleon’s youngest sister, Caroline.

At 19 this “Flower of the Bonapartes” was married off to Napoleon’s brother Louis. It was not a marriage of love, but, rather, it was a marriage of convenience, arranged at Napoleon’s request. The couple never got along, but they did manage to have three children together: Napoléon Louis Charles Bonaparte, Napoleon Louis Bonaparte and Charles Louis Napoléon Bonaparte. (Charles would later become Napoleon III, Emperor of France.)

The Emperor appointed Louis King of Holland and Hortense had to leave her beloved Paris to follow her no-so-beloved husband to Holland. The Netherlands won her over and she learned to enjoy the people, customs and landscapes. But her relationship with Louis did not improve.

After the death of their first son Hortense was allowed to return to Paris because it would provide a more healthy environment for both the Queen and her remaining children. When Napoleon prepared to remarry he decided that it wouldn’t do to have the daughter of his first wife living at court, so he had her shuttled north again. Her stay in Holland was temporary and she left, again for “health” reasons, in 1810.

Now officially separated Hortense moved to Switzerland where she had a long-term affair with Colonel Charles Joseph, Comte de Flahaut. The couple had an illegitimate son together, Charles Auguste Louis Joseph. 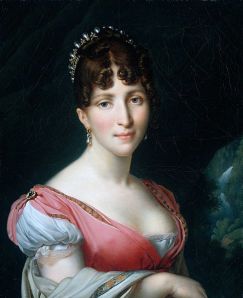 She remained a loyal Bonapartist. When the Bourbon monarchy was restored in Paris, Hortense — like all the Bonapartes –went into exile. She, Charles Louis Napoléon Bonaparte and Charles Auguste Louis Joseph moved to Arenenberg Castle, near Lake Constance in Switzerland. While there she transformed…

The medieval castle and its gardens …. into an island of French culture amidst the rather provincial region of Lake Constance. The castle was surrounded by a 12 ha park with hermitage, fountains, waterfalls and nymphaeum, steep paths and viewpoints.  [www.bodensee-magazine]

The main house, which still stands, had living quarters and rooms for entertainment (including a theatre). She continued to expand the house and  revamp the estate, adding the latest in Parisian style almost until her death on October 5,  1837. 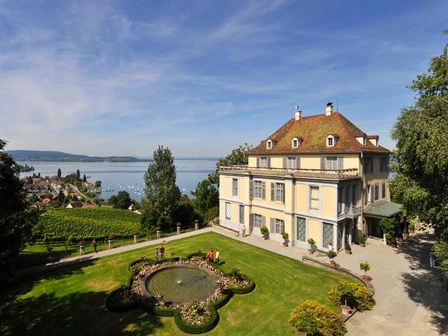 Freelance writer, graphic designer, musician, foodie and Jane Austen enthusiast in Northern Baltimore County, Maryland. As a writer I enjoy both fiction and non fiction (food, travel and local interest stories.) As an advocate for the ARTS, one of my biggest passions is helping young people find a voice in all the performing arts. To that end it has been my honor to give one-on-one lessons to elementary, middle and high school students in graphic design and music. And as JANE-O I currently serve as the regional coordinator for JASNA Maryland and am working on a Regency/Federal cooking project. END_OF_DOCUMENT_TOKEN_TO_BE_REPLACED
This entry was posted on Thursday, April 11th, 2013 at 12:44 am and tagged with Joséphine de Beauharnais, Napoleon, Napoleon III, Paris and posted in "Flower of the Bonapartes", Europe, France, History, Holland, Hortense E de Beauharnais, Napoleon, postaday, Thought of the Day, Today's Birthday. You can follow any responses to this entry through the RSS 2.0 feed.
« Eadweard Muybridge 4.9.13 Thought of the Day
Gustav Vigeland 4.11.13 Thought of the Day »

2 responses to “Hortense de Beauharnais 4.10.13 Thought of the Day”