“As an actor, I go where the good writing is. That’s the bottom line.“–Glenn Close 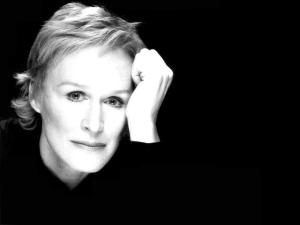 Glenn Close was born on this day in Greenwich, Connecticut, USA in 1947. She is 66 years old.

She is one of four children born to Bettine and Dr. William Taliaferro Close. The first seven years of her live were ones of privilege. She fondly remembers the ease and freedom of living in on her grandmother’s estate in the Connecticut countryside. But then things changed. Her parents joined the conservative salvation group Moral Re-Armament. The family moved into communal living centers and eventually her parents traveled to the Belgian Congo where her father ran several medical clinics and became a personal physician to  Mobutu Sese Seko. Close went to school in Switzerland. She attended Choate Rosemary Hall in Greenwich. And for a while in the mid-to-late 1960’s she performed with the MRA’s singing group “Up With People.”

At 22 she left the MRA and entered William and Mary College in Williamsburg, Virginia. There she took up acting in earnest.  Upon graduation she moved to New York and found work on the stage. She had her Broadway debut in 1974 as Angelica in Love for Love. Her break out role on the Great White Way was as Chairy Barnum in the Original Broadway Production of Barnum in 1980. 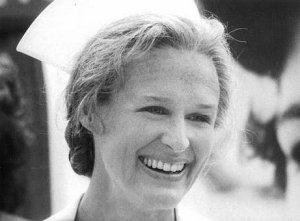 Close in The World According to Garp. [Image courtesy: Fixster.com]

She made the jump to film in 1982 with The World According to Garp. She played Jenny Fields. The role earned her the first of her many Academy Award nominations. Another Oscar nomination came for her role as Sarah Cooper in The Big Chill in 1983, and yet another for her part as Iris Gaines in 1984’s the Natural.

She went against type and starred as Alex Forrest in Fatal Attraction in 1987. She got another Academy nod — this time for Best Actress. And got nominated again in that category for Dangerous Liaisons in 1988.

In 1990 she played Queen Gertrude to Mel Gibson’s Hamlet, And Sunny Von Bulow to Jeremy Iron’s Claus  in Reversal of Fortune.

But not everything on her CV is a drama. In 1996 she co-starred as First Lady Marsha Dale in Tim Burton’s Mars Attacks! and the first of her gigs as the villainous, puppy hating Curella de Vil in 101 Dalmatians. 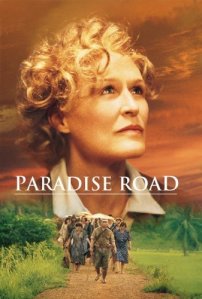 In 1997 she was Adrienne Pargiter in the brilliant and under rated Paradise Road. The film is a…

Fact-based recounting of a group of women who are imprisoned on the island of Sumatra by the Japanese during World War II and used music as a relief to their misery. [IMDb]

The movie co-stars Pauline Collins, Frances McDormand, Cate Blanchette, Jennifer Ehle and Julianna Margulies  and is a beautiful testament to the human spirit and the power of music. If you haven’t seen it… do your self a favor and put it in your queue.

She showed off her pipes again as Nellie Forbush in a made for TV version of South Pacific. (An interesting counter part to Paradise Road — considering both films cover the same period in history, the same conflict,  and approximately the same geography, and both contain some lovely music… yet they take a very different look at WWII.)

Close was Eleanor of Aquitaine opposite Patrick Stewart’s Henry II  in the TV version of The Lion in Winter, in 2003.

She had a 13 episode character arch as Captain Monica Rawling on The Shield. She voiced Mother Simpson on the Simpsons several times, and, more dramatically,   played Patty Hewes  on the TV series Damages starting in 2007.

Close was nominated for yet another Best Actress Oscar for her work in Albert Nobbs. The film came out in 2012.

Currently she has two films in the works for 2014, The Grace That Keeps This World, and Always on My Mind. Maybe she’ll get nominated again for one of these, and maybe, just maybe, the 7th time will be a charm!

Freelance writer, graphic designer, musician, foodie and Jane Austen enthusiast in Northern Baltimore County, Maryland. As a writer I enjoy both fiction and non fiction (food, travel and local interest stories.) As an advocate for the ARTS, one of my biggest passions is helping young people find a voice in all the performing arts. To that end it has been my honor to give one-on-one lessons to elementary, middle and high school students in graphic design and music. And as JANE-O I currently serve as the regional coordinator for JASNA Maryland and am working on a Regency/Federal cooking project. END_OF_DOCUMENT_TOKEN_TO_BE_REPLACED
This entry was posted on Tuesday, March 19th, 2013 at 8:39 pm and tagged with Albert Nobbs, Broadway, Fatal Attraction, Glenn Close, World According to Garp and posted in Film, Glenn Close, Henry II of England, postaday, television, Theatre, Thought of the Day, Today's Birthday, United States. You can follow any responses to this entry through the RSS 2.0 feed.
« Muffin Monday! Date Zucchini Orange Muffins
Fred Rogers 3.20.13 Thought of the Day »