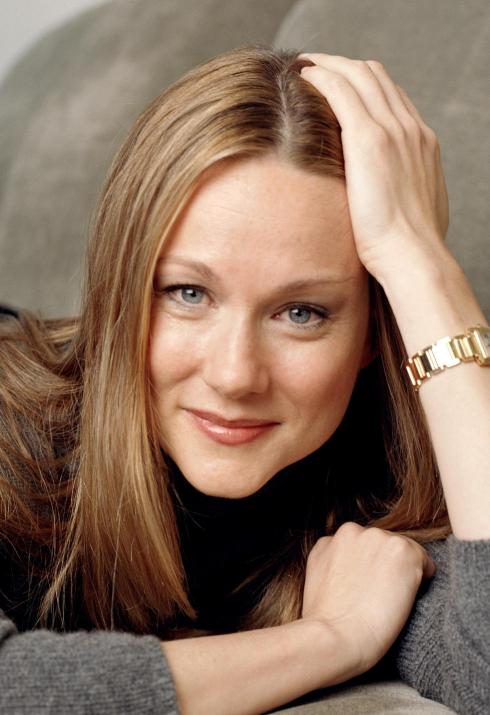 Linney is the daughter of Romulus Linney, a playwright, and Miriam Perse, a nurse. Her parents divorced when she was an infant and she grew up in a modest 1 bedroom apartment with her mother. “Linney grew up working in the theater, both behind the scenes and, in her late teens, on the stage.” [Starpulse.com] After graduating from  Northfield Mount Hermon School, a New England prep school, she went to Northwestern University and Brown University for undergraduate work. (She received her BA in Fine Arts from Brown in 1986). She did post-graduate work with Group 19 at the Juillard School.

She took the stage in such Broadway productions as The Seagull, Six Degrees of Separation and Hedda Gabler before making the leap to film.

Linney’s screen debut was a minor role in Lorenzo’s Oil. She played Kevin Kline’s mistress in Dave, and landed the role of Mary Ann Singleton in Armistead Maupin’s Tales of the City (a role she would reprise two more times.) She played in a trio of thrillers, Congo, Primal Fear and Absolute Power, before getting her big break as Meryl Burbank in The Truman Show.

2000’s You Can Count On Me earned Linney her first Academy Award nomination for Best Actress. (Her second nomination was for her work in 2004’s Kinsey opposite Liam Neeson.) Also in 2000 she did the lush, delightful The House of Mirth (based on the Edith Wharton novel, with Gillian Anderson, Eric Stoltz and Elizabeth McGovern).

Linney won an Emmy Award for her work on Wild Iris opposite Gena Rowlands. She won another Emmy, this time for Outstanding Guest Actress in a Comedy Series for her story arc as Charlotte on the TV show Frasier.

She played Zelda Fitzgerald in American Master’s F.Scott Fitzgerald: Winter Dreams. She worked on ensemble films  including Love Actually and The Laramie Project. She’s equally stunning as the intellectual mom struggling as her family crumbles around her in the Squid and the Whale as she is in the supernatural thriller The Mothman Prophecies  as small town police officer.

On screen, Linney has mastered quite a line in striving. Her most memorable characters have had a combination of astute wit, career focus and either a leavening daffiness or a chilly sort of overbrightness. This tends to hinge on whether they’re good apples (as in You Can Count On Me or The Savages) or bad (The Truman Show, The House of Mirth). [The Telegraph 2.1.13]

She brought Abigail Adams to life with her beautiful, strong portrayal of our second First Lady in HBO’s mini-series John Adams. Linney won  her most recent  Emmy Award for her efforts.

She can currently be seen on Showtime’s The Big C — for which she won a Golden Globe — and as the host of Masterpiece Theatre on PBS. Her latest film role is as Margaret “Daisy” Suckley  in Hyde Park on Hudson opposite Bill Murray’s FDR.

Freelance writer, graphic designer, musician, foodie and Jane Austen enthusiast in Northern Baltimore County, Maryland. As a writer I enjoy both fiction and non fiction (food, travel and local interest stories.) As an advocate for the ARTS, one of my biggest passions is helping young people find a voice in all the performing arts. To that end it has been my honor to give one-on-one lessons to elementary, middle and high school students in graphic design and music. And as JANE-O I currently serve as the regional coordinator for JASNA Maryland and am working on a Regency/Federal cooking project. END_OF_DOCUMENT_TOKEN_TO_BE_REPLACED
This entry was posted on Tuesday, February 5th, 2013 at 5:55 pm and tagged with House of Mirth, Hyde Park on Hudson, Laura Linney, Truman Show and posted in Abigail Adams, Film, Laura Linney, New York, postaday, Thought of the Day, Today's Birthday. You can follow any responses to this entry through the RSS 2.0 feed.
« Rosa Parks 2.4.13 Thought of the Day
Richard the 3rd UPDATE »