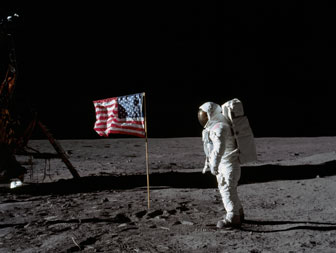 Aldrin’s father was a Colonel in the Air Force, an aviation pioneer and a Doctor of Science graduate from MIT. His mother, whose maiden name was, appropriately enough, Moon, was the daughter of an Army Chaplain. He had two older sisters, the younger of whom couldn’t pronounce brother, instead she said “Buzzer.” That was shortened to Buzz. 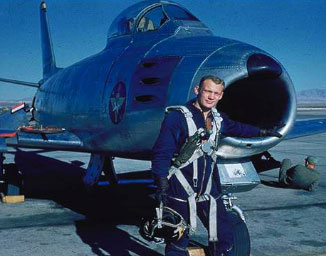 He was offered a full scholarship to MIT, but turned it down, choosing instead to enter West Point Military Academy. He graduated third in his class.

He then joined the Air Force where he flew F86 Sabre Jets in 66 combat missions in Korea, shot down two MIG-15′s, and was decorated with the Distinguished Flying Cross.  After a tour of duty in Germany flying F100’s, he went on to earn his Doctorate of Science in Astronautics at MIT and wrote his thesis on Manned Orbital Rendezvous. [BuzzAlrdrin.com]

He joined NASA as part of the third group of astronauts. His expertise on docking techniques earned him the nickname “Dr. Rendezvous”

The docking and rendezvous techniques he devised for spacecraft in Earth and lunar orbit became critical to the success of the Gemini and Apollo programs, and are still used today.  He also pioneered underwater training techniques, as a substitute for zero gravity flights, to simulate spacewalking. [Ibid]

During his Gemini 12 Mission he “performed the world’s first successful spacewalk” [Ibid].

In July of 1969 he landed on the Moon with Neil Armstrong while Michael Collins orbited over head during the Apollo 11 Mission. Aldrin and Armstrong   became “the first two humans to set foot on another world. They spent 21 hours on the lunar surface and returned with 46 pounds of moon rocks.” [Ibid] 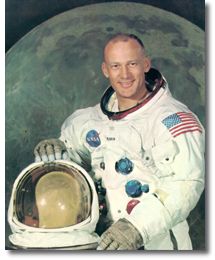 Although he has since retired from NASA he remains a tireless advocate for Space exploration, especially the exploration of Mars. He has written a children’s book, an autobiography, and two space based science-fact-fiction novels. 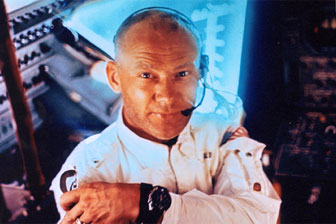 At the passing of Neil Armstrong he wrote:

Whenever I look at the moon I am reminded of that precious moment, over four decades ago, when Neil and I stood on the desolate, barren, yet beautiful, Sea of Tranquility, looking back at our brilliant blue planet Earth suspended in the darkness of space, I realized that even though we were farther away from earth than two humans had ever been, we were not alone. Virtually the entire world took that memorable journey with us. I know I am joined by many millions of others from around the world in mourning the passing of a true American hero and the best pilot I ever knew. My friend Neil took the small step but giant leap that changed the world and will forever be remembered as a historic moment in human history…. [Buzz Aldrin.com]

When people talk about Neil Armstrong they sometimes say he was the “First man on the Moon.” I’m a huge Armstrong fan, but that statement is just not true. Armstrong was the first man to WALK on the Moon, because he descended the ladder of the Lunar Lander first, but he and Aldrin landed on the Moon at the same time.

English: One of the first steps taken on the Moon, this is an image of Buzz Aldrin’s bootprint from the Apollo 11 mission. Neil Armstrong and Buzz Aldrin walked on the Moon on July 20, 1969. (Photo credit: Wikipedia)

Freelance writer, graphic designer, musician, foodie and Jane Austen enthusiast in Northern Baltimore County, Maryland. As a writer I enjoy both fiction and non fiction (food, travel and local interest stories.) As an advocate for the ARTS, one of my biggest passions is helping young people find a voice in all the performing arts. To that end it has been my honor to give one-on-one lessons to elementary, middle and high school students in graphic design and music. And as JANE-O I currently serve as the regional coordinator for JASNA Maryland and am working on a Regency/Federal cooking project. END_OF_DOCUMENT_TOKEN_TO_BE_REPLACED
This entry was posted on Sunday, January 20th, 2013 at 7:04 pm and tagged with Apollo program, Buzz Aldrin, Michael Collins, NASA, Neil Armstrong and posted in NASA, Neil Armstrong, postaday, Space, Thought of the Day, Today's Birthday. You can follow any responses to this entry through the RSS 2.0 feed.
« Secondary Character Saturday — SPIDER (Anansi Boys)
Let the Austen-ing begin… »