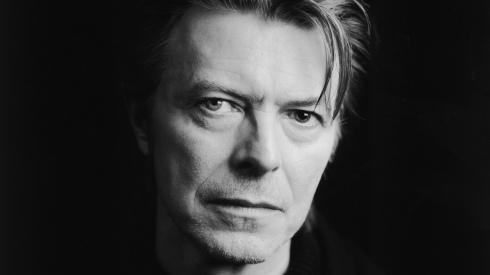 David Robert Jones was born on this day in Brixton, London, England in 1947. He is 66 years old.

He attended local schools in Brixton and Bromley. He took choir– his voice was given a grade of average. — and learned to play the recorder. At home his father bought a stack of American 45s and introduced young David to Rock and Roll. Inspired by Little Richard and Elvis Presley he amped up his music cred by adding ukulele and tea-chest bass to the mix.

At age thirteen, inspired by the jazz of the London West End, he picked up the saxophone and called up Ronnie Ross for lessons. Early bands he played with – The Kon-Rads, The King Bees, the Mannish Boys and the Lower Third –provided him with an introduction into the showy world of pop and mod, and by 1966 he was David Bowie, with long hair and aspirations of stardom rustling about his head. [David Bowie.com]

His self titled, and bizarrely campy, debut album came out in 1967. [It’s pretty hard to listen to any of the songs now, but if you must experience it try The Laughing Gnome Song — http://youtu.be/mWoT9elA-oY  complete with squeaky gnome co-star.]

Bowie’s professional career took off with the 1969 release of his Space Oddity album. The record reach #5 in England.  Space Oddity (aka “Major Tom”) was the break out single, and it remains both a Bowie classic and a pop anthem.

But the longer, more complex, and beautiful Cygnet Committee shouldn’t be overlooked.

His third album, The Man Who Sold the World took on a harder rock feel, and introduced us to  the Spiders from Mars.

And another favorite — All the Madmen:

And Life On Mars…

[I’m limiting myself to just two clips per album… grrr. But you could go pull the YouTube version of Oh! You Pretty Things  too.]

Next up it was a full concept album with The Rise and Fall of Ziggy Stardust and the Spiders from Mars.  Here’s Starman..

Young Americans came out in 1975. The title song reached #28 on the Billboard Charts…

Here he is grooving another hit from the album, Fame, …
Station to Station introduced Bowie’s Thin White Duke character while continuing the funk and soul sound of Young Americans. Here’s Golden Years.

Low began Bowie his Berlin Trilogy. It is one of his best. [I also love Sound and Vision and Breaking Glass] Here’s Always Crashing The Same Car...

Part two of the Berlin Trilogy was Heroes which came out in 1977. I’ve got to go with the title track on this one…

His thirteenth album, and the last in the Berlin Trilogy, was Lodger.  Here’s Look Back in Anger.

The Berlin Trilogy was a critical and artistic success, but not immediately financial success.

Both came with Bowie’s 14th Album Scary Monsters (And Super Creeps) which hit #1 in the UK and did well in the US.

After Let’s Dance Bowie kind of fell of my RADAR, frankly. But he continued to write and sing and put out albums for another two decades:

He was inducted into the Rock and Roll Hall of Fame in 1996, but he didn’t attend the ceremony or the concert.

After The release of Reality and its related A Reality Tour Bowie went into the woodwork.

Apart from the odd rare sighting at a charity function and one or two snatched paparazzi shots, David has kept an extremely low profile [David Bowie.com]

But now it appears he is back. Today he release a new single, Where Are We Now, and he is promising a new album, his 30th, in March!

“We can be heroes, just for one day.” — David Bowie

Freelance writer, graphic designer, musician, foodie and Jane Austen enthusiast in Northern Baltimore County, Maryland. As a writer I enjoy both fiction and non fiction (food, travel and local interest stories.) As an advocate for the ARTS, one of my biggest passions is helping young people find a voice in all the performing arts. To that end it has been my honor to give one-on-one lessons to elementary, middle and high school students in graphic design and music. And as JANE-O I currently serve as the regional coordinator for JASNA Maryland and am working on a Regency/Federal cooking project. END_OF_DOCUMENT_TOKEN_TO_BE_REPLACED
This entry was posted on Wednesday, January 9th, 2013 at 1:06 am and tagged with David Bowie, Man Who Sold the World and posted in David Bowie, England, Entertainment, Film, Music, postaday, Thought of the Day, Today's Birthday. You can follow any responses to this entry through the RSS 2.0 feed.
« Zora Neale Hurston 1.7.13 Thought of the Day
Imelda Staunton 1.9.13 Thought of the Day »