[It’s Second Character Saturday! Today’s character is Piglet. I’ll be going straight to the source and discussing the AA Milne Piglet with illustrations by Ernest Shepard— not the Disney-fied Piglet.]

“But Piglet is so small that he slips into a pocket, where it is very comfortable to feel him when you are not quite sure whether twice seven is twelve or twenty-two.”― A.A. Milne, Winnie-the-Pooh

Piglet and Pooh think about fall.

Who: Piglet
From: Winnie-the-Pooh
By: A.A. Milne
Date: 1926
Why: Piglet is shy, but brave. He reminds us that no matter how small and un-impowered we are… we are still big enough to stand up for what is right and face our fears.He is a role model for friendship.
In the stories he grounds the more popular (and more flighty) Pooh. He has a very strong relationship with Pooh, Eeyore and Christopher Robin. As readers (especial children) we relate to him because of his size and soft voice and WE want to be his friend too.

Pooh and Piglet on an adventure

Shining Moment: I love all the moments with Piglet in the books. I especially the quiet moments between Pooh and Piglet that just say “friendship” to me…
Piglet sidled up to Pooh from behind. “Pooh?” he whispered.
“Yes, Piglet?”
“Nothing,” said Piglet, taking Pooh’s hand. “I just wanted to be sure of you.”
“I don’t feel very much like Pooh today,” said Pooh.
“There there,” said Piglet. “I’ll bring you tea and honey until you do.”
“How do you spell ‘love’?” – Piglet
“You don’t spell it…you feel it.” – Pooh”
When you wake up in the morning, Pooh,” said Piglet at last, “what’s the first thing you say to yourself?”
“What’s for breakfast?” said Pooh. “What do you say, Piglet?”
“I say, I wonder what’s going to happen exciting today?” said Piglet.
Pooh nodded thoughtfully. “It’s the same thing,” he said.” 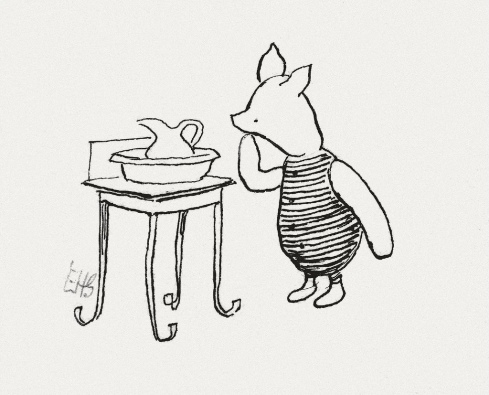 I love when he listens to Eeyore and does something to help him out of his funk.
He’s there for his friends and always willing to help. Despite his diminutive size he is brave enough to face great odds. He may be afraid of everything, but that doesn’t get in the way of his standing up for what is right, or standing next to a friend to face a challenge.

Least Shining Moment: I do not like what Disney did with Piglet. They turned his innocence into a cartoon. I was OK with that as a kid, but as I get older, and Disney keeps chugging out more and more Pooh related crap, I resent that they are forcing the Milne characters into cookie-cutter cartoons of themselves to sell more DVDs and plastic  stuff. Piglet just gets squeekier and squeekier and the tender, brave, humble pig gets more and more diluted. SHAME. 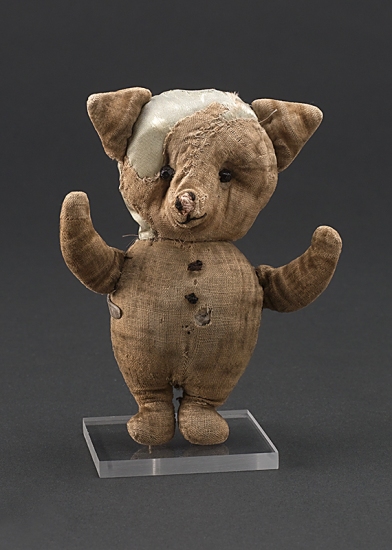 Well loved and well used, this is the original Piglet. One of Christopher Robin Milne‘s surviving stuffed animals, Piglet resides at the New York Public Library.

In 1921, as a first-birthday present, Christopher Robin Milne received a small stuffed bear, which had been purchased at Harrods in London. Eeyore, Piglet, Kanga, and Tigger soon joined Winnie-the-Pooh as Christopher’s playmates and the inspiration for the children’s classics When We Were Very Young (1924), Winnie-the-Pooh (1926), Now We Are Six (1927), and The House at Pooh Corner (1928), written by his father, A.A. Milne, and illustrated by Ernest H. Shepard.

You can see just how small Piglet is compared to the other stuffed animals in this photo. [Image courtesy: The New York Public Library One more image… Piglet dancing with delight. Keep that image in your heart today, OK?

Freelance writer, graphic designer, musician, foodie and Jane Austen enthusiast in Northern Baltimore County, Maryland. As a writer I enjoy both fiction and non fiction (food, travel and local interest stories.) As an advocate for the ARTS, one of my biggest passions is helping young people find a voice in all the performing arts. To that end it has been my honor to give one-on-one lessons to elementary, middle and high school students in graphic design and music. And as JANE-O I currently serve as the regional coordinator for JASNA Maryland and am working on a Regency/Federal cooking project. END_OF_DOCUMENT_TOKEN_TO_BE_REPLACED
This entry was posted on Saturday, December 15th, 2012 at 5:36 pm and tagged with E.H. Shepard, Milne, Piglet, Pooh and posted in A.A. Milne, books, England, Fiction, Film, Piglet, postaday, Secondary Character, Thought of the Day. You can follow any responses to this entry through the RSS 2.0 feed.
« Tycho Brahe 12.14.12 Thought of the Day
Jane Austen 12.16.12 Thought of the Day »