[Most of you know that I’m a Jane Austen fan. And you are probably surprised that it has taken me three whole weeks of Second Character Saturdays to get to an Austen character. Frankly, so am I!  I suppose I was warming up a bit with Horatio and Ron. But today, dear reader, I present you with my absolute favorite Austen creation… a confection of comedy, social commentary and self absorption (and even pathos)… Mary Musgrove from Persuasion.

If you’ve never read Jane Austen’s wonderful Persuasion you can go HERE to read it online via Project Guttenberg; or get it from Amazon Kindle HERE.  Or if you prefer to listen to Austen’s lovely prose HERE is a link to the Librabox recording. All three of these sources are free. You can also go to a book store or library and get something I like to call a B-O-O-K that you hold in your hand and turn the paper pages with your fingers.] 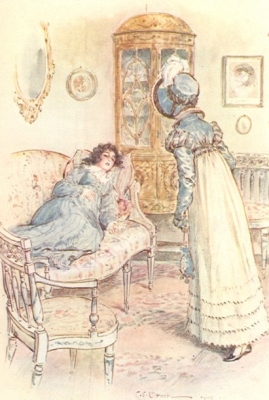 Illustration from an early edition of Persuasion.

Why: Through Mary Austen holds a mirror up to the Elliot’s (and through them the upper class in general)  over inflated sense of self-importance. Society is changing in the novel, there are the established gentry and the up and coming gentry, and each group admires different things. The Elliots are clearly old money and Mary feels, as a Baronet’s daughter, she deserves the best of everything. Unfortunately for her the Musgroves don’t give her the respect she thinks her rank deserves.

The more she demands attention, the more the Musgroves roll their eyes and ignore her.  The more she pushes herself to (her rightful place at) the front of the line, the more ridiculous she looks (and the more resented she is). By the time we meet her in the novel the only way she can get attention is when she is sick.

…is the least attractive daughter in a family where personal vanity is rated a virtue. While Elizabeth is a beauty whose looks have lasted into her late twenties, and Anne was “an extremely pretty girl”, though her bloom faded early, Mary “was inferior to both sisters, and had, even in her bloom, only reached the dignity of being ‘a fine girl’.”  [Literary Characters: Mary Musgrove in Persuasion]

Since Elizabeth never married, Mary would never have been able to enter a wider society. At about 19, she married a man who preferred her sister, and into a family where the members were blindly partial to one another and would always view her as an outsider and a second choice.” [Jane Austen-Her Life and Works]

Not even her little boys listen to her.

Anne (the heroine of the story) inherited her mother’s soothing ways. It’s no wonder Mary calls on her when ever she feels “ill.”

…she is not a first object to anyone. It is understandable that a young woman brought up with so little affection might think herself ill-used when surrounded by evidence of it in a family where she can never fully share it, and where another would have been clearly preferred. [Ibid]

“While well, and happy, and properly attended to, she had great good humour and excellent spirits, but any indisposition sunk her completely; she had no resources for solitude; and inheriting a good deal of the Elliot self-importance, was very prone to … fancying herself neglected and ill-used.” [from Persuasion, by Jane Austen]

Pros: She loves her boys, her husband and her sister. She’s funny. She brings much-needed comic relief to the novel (at her expense).

Best Moment: ummmm… well…. I think Mary really does love Anne. And she appreciates her much more than any one else in the family. Although on the surface that may seem to be for purely selfish reasons I think Mary is genuinely happy to see Anne and spend time with her. 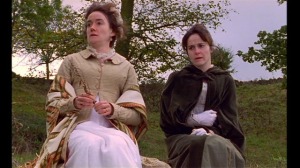 Worst Moment: When Mary gets hysterical at Lyme. Her sister-in-law, Louisa Musgrove, has just taken a serious spill from the top of a stone wall and lies critically injured, and Mary freaks out — causing some of the others to pay attention to her, and not to the unfortunate Louisa. Fortunately Anne keeps her head, calls for a doctor and gets Louisa to their friend’s the Harvilles’ house. “Captain Wentworth asks the capable Anne to stay and assist. Mary is offended, insisting she should stay.” [Literary Characters: Mary Musgrove in Persuasion] Every one gives in, of course, and Anne removes with Wentworth and Henrietta Musgrove to break the news to Mr. and Mrs. Musgrove back at Uppercross. When Mary finally returns to Uppercross we learn …

how useless Mary is as a ‘nurse’, compared with what Anne would have been. While her sister-in-law lies seriously ill, supposedly nursed by her, Mary goes out enjoying herself. Jane Austen writes, that, during her stay in Lyme, Mary ‘found more to enjoy than to suffer’. [Jane Austen-Her Life and Works]

Why I love her: In my bucket list of fantasy things I’d like to do in this life… one of them is to play Mary Musgrove on stage. She is such an interesting character, and it would be a challenge to bring out the humanity to this character who can so easily be portrayed as a cartoon. She makes me laugh, but I feel for her too. I also get pretty frustrated with her. That’s a pretty interesting Secondary Character …. hmmm now that I think about it she’s a lot like Ron.

Freelance writer, graphic designer, musician, foodie and Jane Austen enthusiast in Northern Baltimore County, Maryland. As a writer I enjoy both fiction and non fiction (food, travel and local interest stories.) As an advocate for the ARTS, one of my biggest passions is helping young people find a voice in all the performing arts. To that end it has been my honor to give one-on-one lessons to elementary, middle and high school students in graphic design and music. And as JANE-O I currently serve as the regional coordinator for JASNA Maryland and am working on a Regency/Federal cooking project. END_OF_DOCUMENT_TOKEN_TO_BE_REPLACED
This entry was posted on Saturday, December 8th, 2012 at 4:56 pm and posted in Jane Austen, Persuasion, Secondary Character, Thought of the Day, Writing. You can follow any responses to this entry through the RSS 2.0 feed.
« Williamsburg & Richmond (part 5)
Jakob Dylan 12.9.12 Thought of the Day »