“I grew up on Buck Rodgers and Flash Gordon. There wasn’t a space program or NASA when I was a kid,”

“We just kept putting off the worry as we focused on the next problem and how to solve it,”

“Given that the movie had to condense four days into two hours, and given that the communications were sometimes rather tedious and technical, it was pretty accurate…”

His interest in flying happened by accident.  He was in junior college pursuing a career in Journalism when the Korean War broke out. Haise wanted to enlist

“The only program I could get into that would lead to a commission, which was my primary goal, was the Naval Aviation Cadet Program. So… I ended up in the flying business, which I loved.” [Johnson Space Center Oral History Project]

After being honorably discharged from the service –Haise went from the Cadet Program to the Marine Corps, served a tour of duty, then went into the Air National Guard —  he got his  BS in aeronautical engineering from the University of Oklahoma.

It was quite a path for a young man who had never been in a plane (not even for a commercial flight) prior to entering the Navy. He reckons he’s “flown about 80 types of aircraft.” [Ibid.]

While in the Oklahoma Air National Guard he was introduced to the idea of becoming a NASA research pilot. He was very interested, but the queue at Langley, Ames and Edwards Air Force Bases — NASA’s premier flight test centers at the time — was long. So Haise opted for Lewis Research Center. He worked for 7 years before entering the NASA astronaut program as a research pilot. This was the same path Neil Armstrong had taken three years ahead of him.

Apollo 13 was slated to go to the Fra Mauro region of the Moon; deploy “a set of scientific experiments involved in the ALSEP [Apollo Lunar Surface Experiments Package] packages” [Ibid]  and do field geological work while on EVA.

The mission took off from Kennedy Space Center, Florida on April 11, 1970. The crew included Commander by James Lovell, Lunar Module Pilot, Haise and Command Module Pilot, Jack Swigert. Swigert was a last-minute replacement for Ken Mattingly who was exposed to the measles and pulled off the primary crew a week before take off.

When the Saturn V rocket carrying the Apollo 13 crew was about 2/3rds to the Moon there was an explosion in the oxygen tank. Haise recalls:

‘I was still buttoning up and putting away equipment from a TV show we had completed, and… we were going to get ready to go to sleep. I knew it was a real happening, and I knew it was not normal and serious at…that instant. I did not necessarily know that it was life-threatening.” [Ibid]

He quickly went to his station where he encountered an “array of warning lights.” [Ibid] Haise looked at an instrument panel that read the pressure, temperature and quantity of the oxygen tanks. One had the needles at the bottom of all three gauges.

They had lost an oxygen tank, and, according to Mission Rules, that meant they had lost the Moon. They were now in abort mode.

Still, the situation didn’t seem life threatening. But after a few minutes it became evident that the second oxygen tank– the remaining tank — was also leaking.

“When it became obvious it was dwindling or losing oxygen, then the handwriting was on the wall that the command module was going to die and have to be powered-down.” [Ibid]

The crew transferred to the smaller Lunar Module.

Ground controllers in Houston faced a formidable task. Completely new procedures had to be written and tested in the simulator before being passed up to the crew. The navigation problem had to be solved; essentially how, when, and in what attitude to burn the LM descent engine to provide a quick return home. [NASA.gov]

Power and consumables were the first concern, but another danger, Carbon Dioxide, proved a hidden foe.

There were enough lithium hydroxide canisters, which remove carbon dioxide from the spacecraft, but the square canisters from the Command Module were not compatible with the round openings in the Lunar Module environmental system…Mission Control devised a way to attach the CM canisters to the LM system by using plastic bags, cardboard, and tape- all materials carried on board.[Ibid]

To navigate back to Earth the space craft was  put on a free-return course that required two burns of the engines. The first burn lasted  35 seconds and occurred  5 hours after the explosion. The second burn was 5 minutes and took place as they approached the Moon.

Apollo 13 crew aboard the USS Iwo Jima after splash in the Pacific. They are (l-r) Fred Haise, John Swigert and James Lovell. [Image courtesy: about.com]

Amazingly the three men in the capsule and the hundreds of people back at Mission Control were able to get the space craft back to Earth safely. Apollo 13 splashed down near Samoa  on April 17, 1970.

After Apollo 13 both Haise and Swigert had hopes of being assigned another Moon mission, but that did not come to pass.  (Swigert went on to become a member of the House of Representatives from Colorado in 1982 before dying of bone cancer.)  Haise stayed with NASA and worked on the Shuttle program. 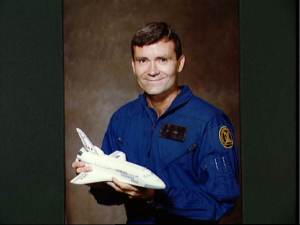 He was commander of one of the two 2-man crews who piloted space shuttle approach and landing test (ALT) flights during the period June through October 1977. [Ibid]

There were a total of 8 “piggy back” flights that tested  the Shuttle’s critical glide, approach, landing, rollout, and flare capabilities.

After resigning from NASA in 1979 Haise became VP of Space Programs at Grumman Aerospace Corporation.

Freelance writer, graphic designer, musician, foodie and Jane Austen enthusiast in Northern Baltimore County, Maryland. As a writer I enjoy both fiction and non fiction (food, travel and local interest stories.) As an advocate for the ARTS, one of my biggest passions is helping young people find a voice in all the performing arts. To that end it has been my honor to give one-on-one lessons to elementary, middle and high school students in graphic design and music. And as JANE-O I currently serve as the regional coordinator for JASNA Maryland and am working on a Regency/Federal cooking project. END_OF_DOCUMENT_TOKEN_TO_BE_REPLACED
This entry was posted on Wednesday, November 14th, 2012 at 9:08 pm and tagged with Apollo 13, Fred Haise, NASA and posted in American History, Fred Haise, NASA, Neil Armstrong, postaday, Science, Space, Thought of the Day, Today's Birthday, United States. You can follow any responses to this entry through the RSS 2.0 feed.
« Thought of the Day 11.13.14 Steve Zahn
Thought of the Day 11.15.12 Georgia O’Keeffe »