[Since I will be AFK (Away From Keyboard) I thought I’d share the following short children’s story called “Mangahoota.” My daughter was kind enough to do the wonderful images. (I especially love the author/illustrator image at the end.) Needless to say this is copyrighted material and may not be duplicated in any form. Same goes for the illustrations. ] 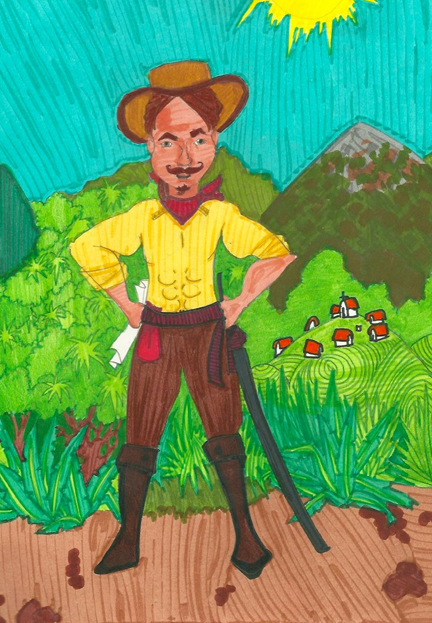 There once was an explorer named Juan Diego Benetiz Jorges Alanzo Perez. He loved to explore the wild and wonderful jungles of the Mexican country side. One day he was walking through a field, eating a mango, when something fell– plop– right on his head. It hit Juan with such a force that the poor man was knocked out cold.

When he woke up there was a bandage across his eyes. He couldn’t see and he had a terrible headache. “Please, Please, where am I?” Juan asked in Spanish.

“Senior, you are in my hospital.” Brother Christos put a gentle hand on the man’s arm. “You had a terrible blow, but you will be all right.”

“That is because your eyes have been bandaged.” Brother Cristos told him, “In a few days we will take off the bandages and you will be all better.”

Brother Christos stayed with Juan for a little while and then he left to go to Mass. But, before he left he promised Juan he would visit him again just before evening prayers.

Juan fell back asleep. He had odd dreams of gigantic flying creatures. He woke with a start. There was a thunderous sound outside. “Bam, Bam! Bam, Bam!” The whole hut shook! But, then a second later a softer “Bam, Bam,” came, and a tiny “Ouch.”

“What is that?” Juan called out, but he was the only one in the hospital that day so there was no one to answer he question.

When the good brother came back that evening he asked Juan if he had gotten any rest. 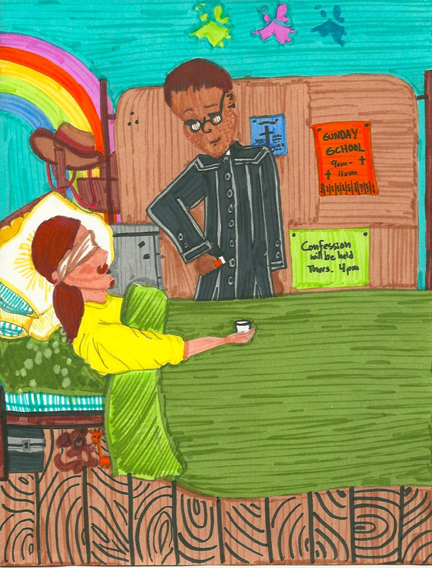 “I did rest” Juan told him, agitated, “but then I was awaken by a terrible noise.” He described it to Brother Christos.

Because the bandages, Juan could not see Brother Christos smile.

“Did we have an earth quake, Brother?”

“Oh, no.” Brother Christos said calmly, “That was only Mangahoota.”

“What on Earth is Mangahoota?” Juan demanded.

“It is a creature that lives in this area.” Brother explained. “It is usually very sweet and gently, but I’m afraid he lost his control yesterday and he fell from the sky.” There was a note of apology in the holy man’s voice. “That is how you got hurt, you see. Mangahoota fell on you.”

“A bird that is big enough to knock a man cold?”

“Oh, not a bird exactly, but yes, it is quite big.” Brother Christos told him.  “It is a difficult thing to explain.”

The next day, when Juan was sitting in the garden of the hospital, enjoying the warm sun on his bandaged face, it happened again. There was an enormous swooshing sound and then “Bam, Bam!” The Earth shook and the water spilled from his glass, “Bam, Bam!” Then softer “Bam, Bam, ouch”

“Help!” Juan cried in horror. “Help! Help! That Mangahoota is trying to get me! Help!”

The Mangahoota must have been frightened by the tone in Juan’s voice because it flew away again immediately.

Brother Christos came running. “What it is Senior? Are you all right?”

“That beast, that Mangahoota swooped down on me again!” Juan cried. “Take me inside, Brother, please.”

“But, senior, I assure you the Mangahoota is a loving animal. It will not hurt you.”

Juan pointed to his bandages, “It has already hurt me!” He said angrily, “Now, Please, I beg you, take me inside.”

“That was an accident.” Brother Cristos said soothingly, but he obliged Juan and walked him into the hut. “Forgive me Senior,” He said gently,  as he helped the explorer sit down “I am a bit confused.”

“Why is that Brother?” Juan asked. He was much calmer now that they were inside.

“I thought you were an explorer.”

Brother Cristos fluffed his pillow. “I see.” He said patiently.

The Holy man poured Juan a drink of cool water and put it in his hand. “Humm?”

“Why did you ask me if I was an explorer?”

“It is only that I thought that explorers liked to learn new things.” He said quietly.

“We do.” Juan told him. “We love to learn new things. That is what we live for!”

“Ahhh.” Brother Christos nodded. He sat down in the chair opposite Juan.

“‘Ahhh’ what?” Juan asked. He wished Brother Christos would just come out and say what was on his mind.

“Well… here you are a man who loves to explore new things, and out there is the Mangahoota, a new thing to you, and yet….”

“I understand your hesitation, Senior. It must have been frightening.”

Juan grabbed at the brothers sleeve. “It was! It is a terribly frightening thing to have a Mangahoota land on your head.”

“I’m sure.” Brother Christos patted his arm. “And you just frightened the Mangahoota by shouting so fiercely. So perhaps it would be best if you didn’t meet.” He pushed himself off his chair and went to leave the room. “You are right, Senior. A meeting would be a bad thing.”

Juan thought for a long time about what Brother Christos had said. He was an explorer and this was a new and strange thing. He’s instincts as a man of knowledge kicked in and curiosity replaced his fear. By the time Brother Christos returned after evening prayers Juan had made up his mind to meet the beast.

The next day Brother Christos walked Juan into the bean field by the mission. When they stopped he handed Juan a bunch of mangos. “What is this?” Juan asked.

“Those are mangoes. Mangahoota loves mangoes.” He held Juan’s hand so it was straight out then he brought it in a slow arch above his head and back down again. “You must wave the mangoes like this, Senior.”

Juan did as he was instructed. “Like this Brother?”

“Yes, but a little faster.” Brother Christos told him. “And you must call him to  you, Senior.”

Juan thought he must be joking.

Feeling silly, Juan waved the bouquet of mangoes over his head and called out “Mangahoota, Mangahoota, come and get them, Mangahoota.”

And from high above the mountains came the swoosh, swooshing sound of enormous wings. Then, “Bam, Bam…Bam, Bam…” and more quietly “Bam, Bam,” and just a whisper of a sound “Ouch.”

The Mangahoota clip-clopped over to them and took a nibble of the mangoes. Sweet smelling, sticky, mango juice pored over Juan’s hands as the creature ate. “Does he like them, Brother?”

Brother Christos laughed as the Mangahoota bent over and gave Juan a sticky lick of a kiss. “Oh, yes, Senior, as I say, they are his favorites.”

They spent some time in the field with the Mangahoota. Both Juan and Brother Christos kept their voices calm and soothing. And the Mangahoota let Juan pet his long fur covered body.

Juan could tell that the creature had long legs with big knobby knees. He had enormous wings, of course, which he kept tucked in against his body. And he had a long muscular neck. His neck was so long that Juan couldn’t reach the top unless the Mangahoota bent down.  But Juan couldn’t form a picture of the Mangahoota in his mind’s eye.

As the Mangahoota flew away and the men walked back into the compound of the mission Juan turned to Brother Christos. “I must know what a Mangahoota looks like.”

“Tomorrow,” Brother Christos told him, “We will take the bandages off, and if you are strong enough we will take our walk outside and you can call him again.”

Juan tried to sleep that night, but he couldn’t keep his mind off the Mangahoota. In the morning Brother Christos came to him and, as promised cut away the bandages.

It took a minute for Juan’s eyes to register his surroundings. The simple thatched hut with the crucifix on the wall, the four camp beds made up with white linens, and the kind young man who had been his doctor smiling at him. Juan smiled back. “Lets go.”

Brother Christos nodded to the bedside table. There were two bouquets of mangoes.

“I must warn you Senior,” Brother Christos told him, “the Mangahootas are very unusual creatures.”

“I should say so!” Instead of the monk helping support Juan, he was being pulled by him. They walked to the middle of the field.

“So unusual that you must employ all of your powers of imagination to see him as he is.”

“I understand. Don’t worry Brother, I have a very good imagination.”

Brother Christos smiled at him and gave him some mangoes.

With out hesitation Juan waved them frantically over her head. “Mangahoota, Mangahoota, come and get them Mangahoota!”

“Mangahoota, Mangahoota, come and get them Mangahoota!” Juan looked at the monk. “Perhaps he doesn’t recognize me with out my bandages.

“We will both try, Senior.” And, holding his robes so he wouldn’t trip, he waved his too mangoes in the air.

Then they saw him. Flying high over the mountains, so big that for a second he blocked out the Sun.

It flew lower over the field. Then with a ground shaking “Bam, Bam” its front hooves hit the ground. “Bam, Bam” the back hooves touched down. Then  a slow unforgiving arch of unstoppable motion bent his long neck and with a  softer, “Bam, Bam” the knobs on the tops of the Mangahoota’s short antlers tapped the ground, and the creature gave a soft, childlike “Ouch.”

It shook away the small pain and  brought its face up to the mangoes. It began to eat, showering Juan and Brother Christos with mango juice. They laughed out loud. When he had devoured the mangoes he eyed them with his big giraffe eyes and lowered his sweet face first to Juan and then to Brother Christos and administered a lick of appreciation.

Later, as the giant animal took flight, Juan turned to Brother Christos. “Why didn’t you tell me a Mangahoota is a flying giraffe?”

“Some times it is better to believe without seeing, Senior, but some things are better believed when seen. The trick,” the young man smiled at Juan, “Is to know which is which.”

Rita is a writer, designer, musician, animal lover and Austen enthusiast. She thinks her daughter is extra awesome for doing these illustrations.
Maggie is an aspiring educator, perpetual doodler and actress.

Freelance writer, graphic designer, musician, foodie and Jane Austen enthusiast in Northern Baltimore County, Maryland. As a writer I enjoy both fiction and non fiction (food, travel and local interest stories.) As an advocate for the ARTS, one of my biggest passions is helping young people find a voice in all the performing arts. To that end it has been my honor to give one-on-one lessons to elementary, middle and high school students in graphic design and music. And as JANE-O I currently serve as the regional coordinator for JASNA Maryland and am working on a Regency/Federal cooking project. END_OF_DOCUMENT_TOKEN_TO_BE_REPLACED
This entry was posted on Tuesday, October 9th, 2012 at 1:05 pm and tagged with animals, Children's Fiction, people and posted in Art, Fiction, postaday, Thought of the Day, Writing. You can follow any responses to this entry through the RSS 2.0 feed.
« Thought of the Day 10.8.12 B Frank Herbert
Thought of the Day 10.10.12 Lin Yutang »