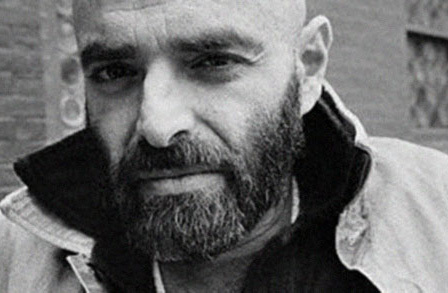 Sheldon Allan Silverstein was born on this day in Chicago, Illinois in 1930. Today is the  82nd anniversary of his birth.

Shel grew up in the Logan Square area of Chicago. He was notoriously private and seldom gave interviews so there is not much know about his early life. In one of the rare interviews he gave he said:

“When I was a kid—12 to 14, around there—I would much rather have been a good baseball player or a hit with the girls, but I couldn’t play ball. I couldn’t dance. Luckily, the girls didn’t want me. Not much I could do about that. So I started to draw and to write. I was also lucky that I didn’t have anybody to copy, be impressed by. I had developed my own style…” [Publishers Weekly, February 24, 1975.]

At 12 he became interested in cartooning and would practice his drawing by tracing comics, including Al Capp, from the “funny papers.” He attended the University of Illinois (for “One useless semester”), and the Art Institute of Chicago (for a summer session) before landing at Roosevelt University. It was a Roosevelt that he was first published, his cartoons appeared in the Roosevelt Torch. 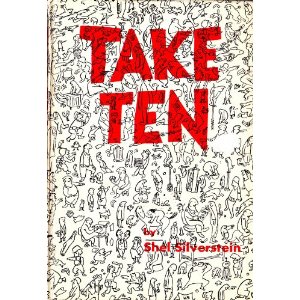 When he got out of the Army he found it difficult to sell his work on a regular basis. He freelanced for Sports Illustrated and Playboy and in 1956 he became a staff cartoonist for Playboy. He contributed poems and published several collections of his cartoons through the magazine.

“…at the suggestion of fellow illustrator Tomi Ungerer, he was introduced to Ursula Nordstrom who convinced him to begin writing for children. One of Silverstein’s most popular books, The Giving Tree, was published in 1964.” [Shel Silverstein, Introduction by Meghan Ung. Humanities on the Internet] 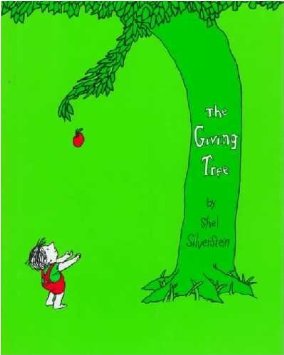 Here’s the 1973 animated movie of The Giving Tree narrated by Silverstein:

1974’s Where the Sidewalk Ends, a collection of poetry for children, won the New York Times Outstanding Book Award. The collection has been republished several times with Silverstein added poems at the 25th and 30th anniversary.  Here’s one of my favorite poems from the book, Hug o’ War:

I will not play at tug o’ war.

I’d rather play at hug o’war.

and rolls on the rug,

Next up was The Missing Piece is a beautifully written story about a circle who is looking for its soul mate. The nontraditional ending is both truthful and bittersweet.

A Light In the Attic brought more wonderful poems and illustrations. [Backward Bill always cracked us up at our house…]

…Backward Bill’s got a backward pup.

They eat their supper when the sun comes up… 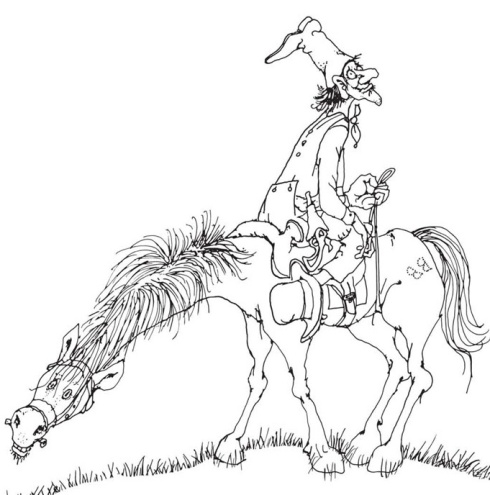 The Shel Silverstein collection  — “borrowed” from the shelves of an obliging independent brick and mortar bookstore, Greetings and Readings, Hunt Valley, Maryland.

Silverstein also had a musical side. He played guitar and wrote songs, including the Johnny Cash hit “A Boy Named Sue“, the Irish Rovers “Unicorn Song” and the Dr. Hook song “The Cover of the Rolling Stone.” He performed on several albums (both his own and others.)

He was also a playwright. He had a hit with The Lady or the Tiger Show a play where contestants in a game show have to choose between two doors. Behind one door is a beautiful woman, behind the other door is a man-eating tiger. He co-wrote Oh, Hell! with David Mamet for Lincoln Center. The two worked together again on the film Things Change.

Here’s the YouTube video for The Missing Piece Meets the Big O, I’d never read this book, or seen this video, but I just loved the message and had to share it…

Freelance writer, graphic designer, musician, foodie and Jane Austen enthusiast in Northern Baltimore County, Maryland. As a writer I enjoy both fiction and non fiction (food, travel and local interest stories.) As an advocate for the ARTS, one of my biggest passions is helping young people find a voice in all the performing arts. To that end it has been my honor to give one-on-one lessons to elementary, middle and high school students in graphic design and music. And as JANE-O I currently serve as the regional coordinator for JASNA Maryland and am working on a Regency/Federal cooking project. END_OF_DOCUMENT_TOKEN_TO_BE_REPLACED
This entry was posted on Tuesday, September 25th, 2012 at 9:53 pm and tagged with Giving Tree, Shel Silverstein and posted in Art, Poerty, postaday, Shel Silverstein, Theatre, Thought of the Day, Today's Birthday, United States, Writing. You can follow any responses to this entry through the RSS 2.0 feed.
« Everybody loves a frog (and my plan for world domination)
Next Post »