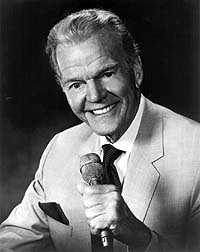 Paul Harvey Aurandt was born on this day in Tulsa, Oklahoma in 1918. Today is the 94th anniversary of his birth.

He was the son of a police officer and was interested in radio early on. He made radio receivers as a child and when he was in high school his smooth voice and distinctive reading style attracted the attention of a teacher who suggested to audition for the local radio station, KVOO.

He was hired at KVOO, but, the road to on air personality began humbly with Harvey starting out by sweeping the floor. Eventually he began to read the news and do commercials. He continued to work as KVOO, both as an announcer and a program director, while he attended the University of Tulsa. He had stints as Salina Kansas’ KFBI, Oklahoma City’s KOMA and St. Louis’ KXOK before he moved to Hawaii. He enlisted in the US Army Air Corps  in December of 1943, but he only served for 14 weeks at which time he was given a medical discharge for a cut on his heel. (Some sources say it was a Section 8 discharge and that Harvey changed his orders to make himself a ranking officer,  stole a plane and inflicted the wound himself during a psychotic dream. Harvey denied all those charges saying:

“It was an honorable medical discharge… There was a little training accident…a minor cut on the obstacle course…I don’t recall seeing anyone I knew who was a psychaitrist…I cannot tell you the exact wording of my discharge.” [The Washington Examiner])

Harvey moved to Chicago and he worked for the ABC affiliate WENR-AM. 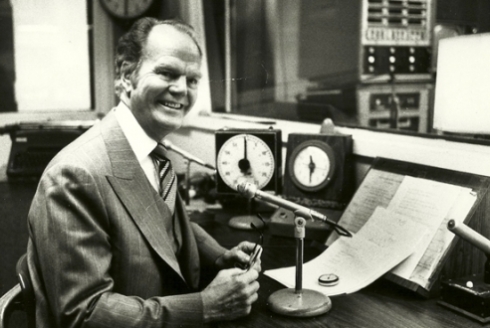 He had a run-in with national security when he attempted to infiltrate the Argonne National Laboratory outside of Chicago. The Lab was a favorite target of Harvey’s for it’s “lack of security” and the radio host wanted to prove it.

Shortly past 1 a.m. on February 6, 1951, Argonne guards discovered reporter Paul Harvey near the 10-foot (3.0 m) perimeter fence, his coat tangled in the barbed wire. Searching his car, guards found a previously prepared four-page broadcast detailing the saga of his unauthorized entrance into a classified “hot zone”. He was brought before a federal grand jury on charges of conspiracy to obtain information on national security and transmit it to the public, but was not indicted. [Argonne National Laboratory; History]

Harvey had friends in high places, most notably Senator Joseph McCarthy and FBI Director J. Edgar Hoover, and the charges against him were dropped. Of the incident Harvey later went on air to say  “Though my methods may be questioned, my accuracy and my loyalty never will be.”

In 1951, while the grand jury was still out in the Argonne case, Harvey debuted a new program on ABC,  Paul Harvey News and Comment. The show came on weekdays at noon and ran  for 58 years — the longest running radio show in history — until Harvey’s death in 2009. It was:

an idiosyncratic mix of headlines, comments, quips and advertisements, all voiced by Harvey — …syndicated at its peak to more than 1200 radio stations around the country each day. Harvey … wrote and recorded his shows six days a week from studios in Chicago. His brisk, quirky delivery and signature greeting “Hello, Americans!” were widely (if fondly) parodied. In 1976 Harvey began a companion radio feature, The Rest of the Story, telling little-known tales from the lives of famous people.  [Who 2 Biographies]

The Rest of the Story, while broadcast by Harvey, were written and produced by his son, Paul Harvey, Jr.. According to the production team the stories were completely true, but, in reality were either poorly researched or simply skewed to represent Harvey’s (Sr. and Jr) point of view.

He is the author of 7 books including: Autumn of Liberty; Our Lives, Our Fortunes, Our Sacred Honor; Paul Harvey’s For What It’s Worth; and several collections of The Rest of the Story. His biography Good Day! The Paul Harvey Story was published in 2009.

Harvey was inducted into the Radio Hall of Fame in 1990. In 2005 he received the Presidential Medal of Freedom. 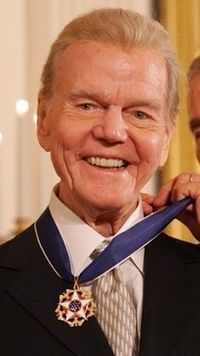 Other Paul Harvey quotes include:

“Golf is a game in which you yell ‘fore!’ shoot six, and write down five.”

[This is one of those Thought of the Day birthday nods that I have a sentimental link to. I’m not a big fan of Paul Harvey and his conservative, folksy style, but there is a touchstone here.

I clearly remember listening to his gravely voice and pregnant pauses while in the car with my dad. He’d sign off with ‘good day’ and we’d echo back a ‘good day’ to each other.

The A&E Biography page links Harvey with Joseph McCarthy, J. Edgar Hoover and Billy Graham as “friends”, not three people I’d hope to see as the top three friends in my bio. And it is pretty clear that Harvey was less than diligent in his research. But I guess when you have to put out 5 days worth of “Story” to 23 MILLION fans facts can take a back seat.

…Still anytime I can spend a few hours remember my dad is worth the effort. And THAT’s the REST of the story. ‘Good day!’]

Freelance writer, graphic designer, musician, foodie and Jane Austen enthusiast in Northern Baltimore County, Maryland. As a writer I enjoy both fiction and non fiction (food, travel and local interest stories.) As an advocate for the ARTS, one of my biggest passions is helping young people find a voice in all the performing arts. To that end it has been my honor to give one-on-one lessons to elementary, middle and high school students in graphic design and music. And as JANE-O I currently serve as the regional coordinator for JASNA Maryland and am working on a Regency/Federal cooking project. END_OF_DOCUMENT_TOKEN_TO_BE_REPLACED
This entry was posted on Tuesday, September 4th, 2012 at 2:44 pm and posted in Fiction, Non Fiction, Paul Harvey, postaday, Thought of the Day, Today's Birthday, United States, Writing. You can follow any responses to this entry through the RSS 2.0 feed.
« Heck yes! I’m a Stats Junkie
Thought of the Day 9.5.12 Freddie Mercury »