Hey it’s Secondary Character Saturday! Today’s character is Sally Brown, Charlie’s sister. And she was suggested by Emma and Maggie.

Sally: I’ve been looking for you, big brother. Will you please write a letter to Santa Claus for me?
Charlie Brown: Well, I don’t have much time. I’m supposed to get down to the school auditorium to direct a Christmas play.
Sally: [hands a clipboard and pen to Charlie Brown] You write it and I’ll tell you what I want to say.
Charlie Brown: [sticks pen in his mouth] Okay, shoot.
Sally: [dictating her letter to Santa Claus as Charlie Brown writes it for her] Dear Santa Claus, How have you been? Did you have a nice summer?
[Charlie Brown looks at her]
Sally: How is your wife? I have been extra good this year, so I have a long list of presents that I want.
Charlie Brown: Oh brother.
Sally: Please note the size and color of each item, and send as many as possible. If it seems too complicated, make it easy on yourself: just send money. How about tens and twenties? 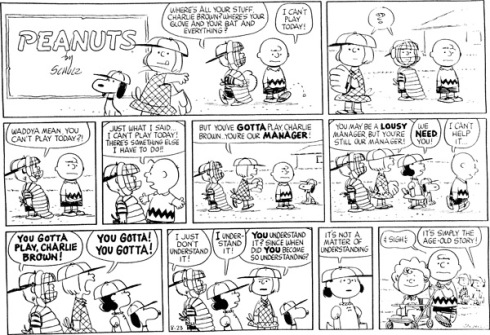 Why:  She’s got style. Sally is the foil to the other characters on the strip. She has no filter and says what she feels. In that way she is a mirror to (overly) introspective Charlie Brown and sensitive Linus (and to us). We see a simplified version of our own daily struggles in the way she struggles in school.

Cons: Hot tempered when her innocence is betrayed (like after spending all night waiting for the Great Pumpkin). Oblivious to the feelings of those around her.

Sally: Which gramma gave me the book—the fat one or the skinny one?
Charlie Brown: The skinny one.
Sally: Grammas should have names like people.