Here’s what the list looks like so far. The titles in red are, well, read. Those in Blue are either in progress or are in the queue. 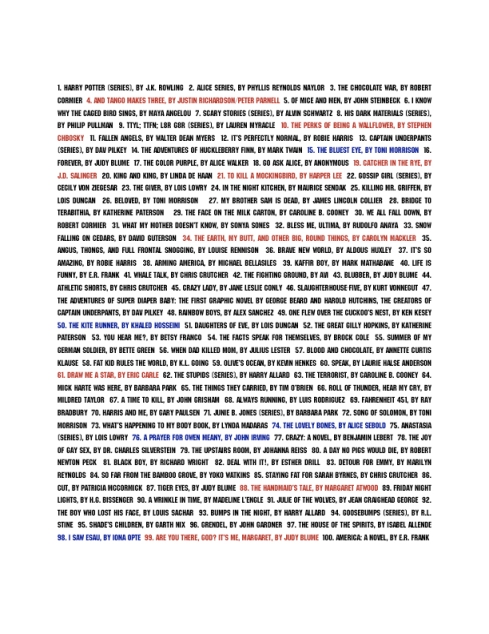 Eric Carle is probably best known for The Very Hungry Caterpillar which was first published in 1969. Draw Me A Star was published much later in his career (1992), and I guess the author was feeling secure in his writing style and audience, because he dared to do the unthinkable. He included two nude figures. The people are barely anatomically correct. His signature collage, tissue paper style produces crude, childlike illustrations, and, yes, the female figure has two circles to indicate breasts and the man has an appendage that is a penis. So I guess that’s it.

Draw Me A Star got banned for Nudity 8 pages and 53 words into the book. 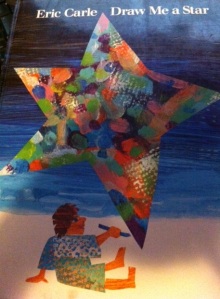 Like just about every girl I knew growing up I read Are You There God? Its Me Margaret by Judy Blume. I don’t remember there being much fuss about it 35  years ago and I can’t figure out what would put it on the list now.

The book is a coming of age novel where Margaret talks to God and tries to find her place in a new school in a new city. She is also trying to decide which religion she wants to align with (her father is Jewish; her mother is Christian.) Margaret longs to get her period and grow into her new bra,  but, after reading Wallflower and Catcher this teenager comes off VERY innocent and sweet.

My best guess to why it is on the list? Some one must have gotten offended on Religious grounds.

Blume is on the list more than once. Now I’m looking forward to reading her Tiger Eyes (which I have not read before)

Freelance writer, graphic designer, musician, foodie and Jane Austen enthusiast in Northern Baltimore County, Maryland. As a writer I enjoy both fiction and non fiction (food, travel and local interest stories.) As an advocate for the ARTS, one of my biggest passions is helping young people find a voice in all the performing arts. To that end it has been my honor to give one-on-one lessons to elementary, middle and high school students in graphic design and music. And as JANE-O I currently serve as the regional coordinator for JASNA Maryland and am working on a Regency/Federal cooking project. END_OF_DOCUMENT_TOKEN_TO_BE_REPLACED
This entry was posted on Wednesday, October 29th, 2014 at 2:38 am and posted in A Year of READING Dangerously. You can follow any responses to this entry through the RSS 2.0 feed.
« More Banned Books
Next Post »