A Year of READING Dangerously — Update

If you are following along you know that I’ve started an on-line book club called A Year of READING Dangerously in an effort to collectively read all 100 books on the ALA’s Top 100 Most Banned or Challenged Books of 2000-2009 list.  I hope you’ll join us in this goal as most banned books are well worth reading! Click HERE to go to the FaceBook page and join in the fun or just leave a message at the end of this post and let us know what you are reading and what you thought of it.

As you can tell I’m not reading the list in order  and I’m mixing it up as far as literature, children’s books and pop lit. This is largely to do with what is readily available — either currently on my shelves at home or easily attainable at the local library — and do to the fact that I don’t think I could handle too much grim fiction all at once (or too much teen-aged angst all at once for that matter.)   I was going to just post my findings on the FaceBook page, but since some of you don’t DO F.B. I realized that that leaves you out of the loop. So I’m starting fresh here. 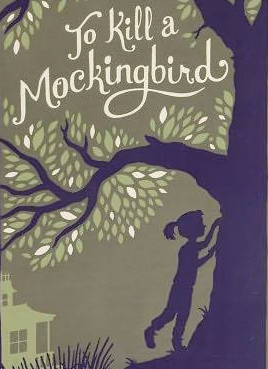 To Kill A Mockingbird (#21) — What a lovely, lovely book. I’m a sucker for fiction written in the first person / childhood past. This book has the best elements of a coming of age novel, a courtroom drama, historical fiction, innocence lost, and southern drama. I also like that it is written about the 1930’s but was written in the 1960’s and the two eras keep smashing up against each other with their common themes. It made me want to curl up in Atticus Finch’s lap and read some more.

My guess to why it was banned? Violence. Racism. Offensive language (the N word). Rape. Political Viewpoint.

This warm, sweet, delightful picture book tells the true story of two male chinstrap penguins that formed a family in 1998. They did all the same things as the other families did… bowed to each other, walked together, sang together, swam together… but there was one thing Roy and Silo couldn’t do that the other families could do… they couldn’t produce an egg. So when another penguin family produced two fertilized eggs the zoo keeper put one of them in Roy and Silo’s nest. After days and nights of tending the nest and sitting on the egg Roy and Silo’s family is completed when Tango Make Three. This book is beautifully illustrated by Henry Cole and lovingly written by Justin Richardson and Peter Parnell.

My guess to why it was banned? Homosexuality. (Yep, I guess that’s enough to get this sweet little book a spot at number 4 on the list.)

I’d read the novel years ago and there were several scenes that stuck with me vividly. I remember the gloom of dystopia from my first go, but what moved me this time was the feminism in the book. Not sure what has changed in me (the words are still the same, so It must be me who’s changed) but this time it was much more about what had happened to womanhood than what had happened to mankind in general. The section towards the middle when Ofglen remembers the sea change in society — when her credit card doesn’t work and she looses her job — kept me up at night (just as it did when I first read the book). [Hello Apple, I think I’ll keep my real money and not go with your all-purpose funny money iphone app.] Anyway, GREAT read.

My guess to why it was banned? Religious viewpoint. Political viewpoint. Violence. (And if you are being picky: Nudity. Sexism. Drugs, alcohol, smoking. Homosexuality. Sexually explicit.)

From the title I’d hoped this book would be funny, sarcastic and kind of snappy. Alas it wasn’t really. It was kind of whiny and two dimensional. Written in first person narrative by the ugly duckling of the Shreve family, you are supposed to be on overweight, under appreciated, Virginia’s side. And I was, mostly, but I kept thinking that the cardboard cut outs of her parents and school mates probably had a lot more dimension to them than she was presenting. Same with conflicts in the story (big and small). The only things that ever got fully fleshed out was her diet and her eyebrow piercing.  I’ve read other YA angst novels that are far more successful.

My guess to why it was banned? The first sentence probably had the Parent Review Board tossing this one out. Sexually explicit. Date Rape. Unsuited for age group.

Freelance writer, graphic designer, musician, foodie and Jane Austen enthusiast in Northern Baltimore County, Maryland. As a writer I enjoy both fiction and non fiction (food, travel and local interest stories.) As an advocate for the ARTS, one of my biggest passions is helping young people find a voice in all the performing arts. To that end it has been my honor to give one-on-one lessons to elementary, middle and high school students in graphic design and music. And as JANE-O I currently serve as the regional coordinator for JASNA Maryland and am working on a Regency/Federal cooking project. END_OF_DOCUMENT_TOKEN_TO_BE_REPLACED
This entry was posted on Tuesday, October 7th, 2014 at 1:32 pm and tagged with Atticus Finch, Roy and Silo, Tango Make Three and posted in A Year of READING Dangerously, Banned Books, books. You can follow any responses to this entry through the RSS 2.0 feed.
« Thought of the Day 10.1.12 Julie Andrews
More Banned Books »