FROM: The Hunger Games

Cover of The Hunger Games

PROS: Kind, compassionate, romantic, creative, artistic, loyal, humble, physically strong (he can wrestle and throw a sack of flour). Long before he and Katniss take the train to the Capital his selfless act of  giving her bread saves her from starvation. That act of kindness meant a beating for him, but salvation for Katniss and her family. And he did it with out any anticipation of a return favor on Katniss’s part. That kindness for kindness sake speaks volumes to Peeta’s personality.

CONS: He’s not tough enough for the Hunger Games. He hasn’t been training his whole life for it — either in the woods near District 12 or in the gyms of District 1, 2, or 3. His compassion and lack of survival skills might just get him killed in the arena. 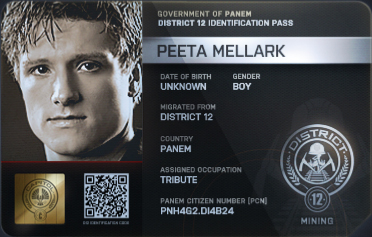 MOST SHINING MOMENT: Peeta is a stand up guy in the toughest of situations. He never expects to win the Hunger Games — his own MOTHER lets him know that SHE doesn’t expect him to win — but that doesn’t mean he has to lose. He defines the parameters of what a personal victory means when he tells Katniss that he all he wants o do is die with honor.

“…He doesn’t just want to be a pawn in the Capitol’s game. He wants to “die as himself” (10.70). For Peeta, it is important that the Capitol knows that they don’t own him.” [Shmoop.com]

LEAST SHINING MOMENT: I get that Peeta is gob smack in love with Katniss, but I think his outing that love on live television with every one in the Twelve Districts and the Capital watching was bad form. It puts way too much pressure on Katniss and it just isn’t fair. I think his declaration was honest, but it was manipulative in retrospect. (Even if that wasn’t his intent.)

WHY I CHOOSE HIM: I choose Peeta because he’s the underdog of the story and I found myself pulling for him throughout. He’s the moral backbone of the story too. I loved Katniss’s strength and chutzpah (and creativeness, and self doubt and family loyalty) but there’s a tenderness to Peeta that just drew me in.

Thus far I’ve only read The Hunger Games…but I’m working on Catching Fire and plan to read the rest of the series. Kindly refrain from spoilers. IF Peeta turns out to be a jerk in Mocking Jay please let me find out on my own, OK? OTHER COMMENTS and discussions are most welcome welcome.

More on the names in The Hunger Games... Well, they are strange, that’s for sure. If you’d like to “find out” what YOUR Hunger Games name is you can click HERE and follow the recipe / algorithm.
(I’d be Eless P Danceelm in District 12 btw.)

Freelance writer, graphic designer, musician, foodie and Jane Austen enthusiast in Northern Baltimore County, Maryland. As a writer I enjoy both fiction and non fiction (food, travel and local interest stories.) As an advocate for the ARTS, one of my biggest passions is helping young people find a voice in all the performing arts. To that end it has been my honor to give one-on-one lessons to elementary, middle and high school students in graphic design and music. And as JANE-O I currently serve as the regional coordinator for JASNA Maryland and am working on a Regency/Federal cooking project. END_OF_DOCUMENT_TOKEN_TO_BE_REPLACED
This entry was posted on Saturday, June 22nd, 2013 at 4:35 pm and tagged with Hunger Game, Katniss Everdeen, Peeta Mellark, Suzanne Collins and posted in Fiction, fictional character, Katniss Everdeen, Peeta Mellark, Secondary Character, The Hunger Games, Thought of the Day. You can follow any responses to this entry through the RSS 2.0 feed.
« Fiction Friday — “Fairly Really Worth Sufficient For Me”
Joss Whedon 6.23.13 Though of the Day »