[No quote for Today’s Thought, just some interesting history and some lovely paintings.]

Ludovico Sforza [il Moro],  born on this day in Vigevano, Lombardy, Italy in 1452. Today is the 518 anniversary of his Birth.

The fourth son of the powerful Sforza family Ludovico was not supposed to become Duke of Milan. But his mother, Bianca Maria Visconti Sforza insisted that he be educated in the arts, government and warfare.

When Ludovico was 14 his father died and his bother Galeazzo Maria became Duke. Galeazzo, was cruel and sadistic ruler. He reigned for 10 years until he was assassinated on St. Steven’s Day (Dec 26) 1476. 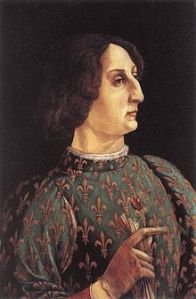 The next in line was Galeazzo’s 7 year old son Gian Galeazzo Sforza. Ludovico, called the More because of his black hair and swarthy appearance, saw his chance and made a play to become Regent for young Gian, but the boy’s mother, Bona of Savoy, fended him off. Ludovico went into exile for a while but returned in 1481 and seized control of Milan.

With Bona out of the way he  became Regent and de facto ruler. He kept a tight reign on the young Duke and refused to turn over power when Gian came of age. And when Gian died from natural causes (many believed his uncle had him poisoned) Ludovico took official control of the Dukedom.

As Regent and then as Duke Ludovico  built Milan into a powerhouse among Italian city states. He invested in infrastructure, building  up the cattle and horse industries as well as the silk industry. He widened the streets,  funded the universities and supported the the continued building of the Cathedral of MIlan.

Ludovico married Beatrice d’Este, a charming and beautiful 15 year old in 1491. Ludovico was already a patron of the arts — Leonardo Da Vinci helped bring about his marriage —  but with Beatrice’s sense of style (and extravagance) Sforza castle blossomed into a center of entertainment. Perhaps Ludovico’s most famous contributions to history is his commissioning of The Last Supper by Leonardo da Vinci. The masterpiece, based on the Gospel of John 13:21 depicts Jesus breaking bread with his 12 disciples shortly before his death. Specifically it shows the reaction of the 12 to Jesus telling them that one of them will betray him  It measures 15 x 29 feet and graces the wall of a dining hall at the monastery of Santa Maria delle Grazie in Milan. (Ludovico’s father, Francesco is buried at Santa Maria).

As the Duke of Milan he was one of many players on the game board that was Italy (Venice, Florence, Naples, and the Vatican in Rome being some others.) Ludovico played a key roll in the Italian Wars.  It was a game he ultimately lost.  He was captured and handed over to the French. He died in the dungeon at Loches on May17, 1508.

Freelance writer, graphic designer, musician, foodie and Jane Austen enthusiast in Northern Baltimore County, Maryland. As a writer I enjoy both fiction and non fiction (food, travel and local interest stories.) As an advocate for the ARTS, one of my biggest passions is helping young people find a voice in all the performing arts. To that end it has been my honor to give one-on-one lessons to elementary, middle and high school students in graphic design and music. And as JANE-O I currently serve as the regional coordinator for JASNA Maryland and am working on a Regency/Federal cooking project. END_OF_DOCUMENT_TOKEN_TO_BE_REPLACED
This entry was posted on Friday, July 27th, 2012 at 8:28 pm and tagged with Leonardo da Vinci, Ludovico Sforza and posted in Art, History, Thought of the Day, Today's Birthday. You can follow any responses to this entry through the RSS 2.0 feed.
« Thought of the Day 7.26.12
Thought of the Day 7.28.12 Beatrix Potter »