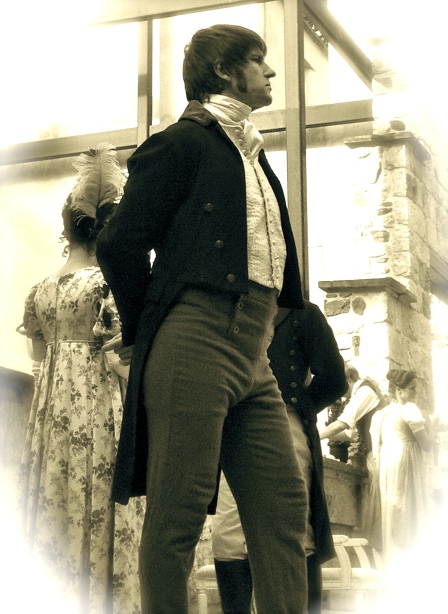 As you may recall from Will (and Jane) This Summer in B’more (June 6) THIS past Friday, Saturday and Sunday was Regency Weekend at the Chesapeake Shakespeare Company (CSC).  The acting troupe put on Christina Calvit’s adaptation of  Jane Austen’s delightful Pride and Prejudice.  The Jane Austen Society of North America: Maryland Chapter (JASNA:MD) joined forces with CSC on Sunday for our Summer meeting, and I came by with some family and friends on Saturday to help with a Game Tent and to drum up some interest in JASNA. 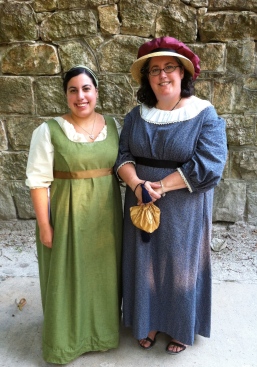 My lovely daughter Maggie, my sister Margie, my husband Bill and I headed to Ellicott City’s Patapsco Female Institute (the stabilized ruins of an old girls school that is now an open air theatre and part of the Howard County Park System) where we met our friends  Lynn Reynolds, Chris and Matt. There  we split up to handle Game Duties and the JASNA recruitment table.

I created the Jane Game while working with a graphic design student. It was a side-by-side project and our goal was to create a board game that we would want to play. It is a trivia game based on the novels of Jane Austen and comes with a laminated or cloth playing board, 100 cards on Pride and Prejudice, glass game pieces and a draw string bag. If you are interested in securing your very own game send me a message.

At the Game Tent we set up The JANE GAME a trivia game based on Pride and Prejudice and Austen BINGO.

Over at the JASNA info table we had registration forms and some fun Austen inspired gear. JASNA is a terrific organization dedicated to the appreciation of Jane Austen and her writing. The over 4,000 members in JASNA (US and Canada) enjoy reading and discussing Austen’s books, learning more about the things Jane liked to do, and exploring the world that influenced her writing. Membership is open to every one interested in the life and works of Jane Austen and includes: a subscription to JASNA News; JASNA’s literary journal — Persuasions; an invitation to the Annual General Meeting; An invitation to join one or more local chapter — like  JASNA: MD ; and participation in members-only tours of Austen sites.  Membership is only $30.00 per year (for individual members.)

We got to talk to some lovely people (first from the cast, then  from the audience) and then we got to see the play.

Mr. Darcy observes Caroline and Lizzy in a scene from Pride and Prejudice (running now through the end of July at the Chesapeake Shakespeare Company.)

As you may have already figured  out, I’m a huge Jane Austen fan (I’ve created a board  game based on her books and I’ve got my own Regency dress, for heavens sake!)  So I was primed and ready for this stage play of P&P.

And I’m happy to say it was universally charming! Happy thought INDEED!

JASNA:MD worked with CSC to pull together a special treat for Sunday’s audience, a pre-show panel discussion on “Kitty and Lydia: Mischief and Merriment.” Polly Bart, JASNA:MD’s Programming Chair, co-ordinated the event for the group and acted as the moderator for the panel. She brought together the actresses who play Kitty and Lydia, Jana Stambaugh and Rachael Jacobs, with JASNA members Mark Turner and Karen Stakem Hornig.

Kitty and Lydia on stage.

The actresses spoke on the joys and challenges of bringing their 200 year old characters from the page to the stage. Turner, who is known for delighting JASNA members with his mind tickling Austen era Charades, took over with “Kitty and Lydia: Their Roles and Relationships” (aka “The Case of the Ugly Bonnet”)

Hornig holds up her favorite film adaptation of Pride and Prejudice.

Hornig presented “Kitty and Lydia as Character Types in Film Adaptations of Pride and Prejudice.” (Note the image of Colin Firth on the cover the Collector’s Edition of the DVD.)

My friend Kim helped me at the JASNA registration/info table on Sunday. We met some wonderful Jane fans who were interested in learning about the organization, as well as tons of lovely current JASNA members stopped by to say hello!

Jane and Lizzie share a sisterly moment in Act One.

I enjoyed the show even more on Sunday. (All the stage shots in this blog are from Sunday’s performance — you aren’t allowed to use a  flash, but since the Sunday show starts two hours earlier… I could shoot with out a flash.)

Sadly I don’t have any photos of Jose Guzman as Mr. Collins. He was hilarious as the sycophant clergyman. Jonas David Grey (Mr. Bennet) and James Jager (Mr. Bingley) were also very funny. Blythe Coons (Lizzy) and Adam Sheaffer (Mr. Darcy) gave more subtle, but equally delicious performances. I particularly like how the audience on Sunday was cheering for Jana Stambaugh — after her pre-show talk about how she, Kitty,  was the “Jan” of the Bennet family, she definitely had us in her corner.

This just in: Thanks to Kim Rock, we now have a picture showing Mr. Collins! (fourth from the right).

Although my weekend with Mr. Darcy, Lizzy and the rest of the Pride and Prejudice cast is over I hope that you will take the opportunity to visit Chesapeake Shakespeare Company this summer and catch this charming adaptation of Jane Austen’s classic.

Pride and Prejudice runs in repertoire with Romeo and Juliet until July 29th.

Freelance writer, graphic designer, musician, foodie and Jane Austen enthusiast in Northern Baltimore County, Maryland. As a writer I enjoy both fiction and non fiction (food, travel and local interest stories.) As an advocate for the ARTS, one of my biggest passions is helping young people find a voice in all the performing arts. To that end it has been my honor to give one-on-one lessons to elementary, middle and high school students in graphic design and music. And as JANE-O I currently serve as the regional coordinator for JASNA Maryland and am working on a Regency/Federal cooking project. END_OF_DOCUMENT_TOKEN_TO_BE_REPLACED
This entry was posted on Wednesday, June 27th, 2012 at 1:35 am and tagged with entertainment, Jane Austen, Literature, Pride & Prejudice and posted in 1812, Jane Austen, JASNA, Pride and Prejudice, Theatre. You can follow any responses to this entry through the RSS 2.0 feed.
« Thought of the Day 6.26.12
Thought of the Day 6.27.12 »

3 responses to “My Darcy Weekend”