The Battle of Baltimore and the Bombardment of Fort McHenry was a turning point in the War of 1812. As the country celebrates the bicentennial of the war Baltimore threw a Sailabration with tall ships, naval vessels, an air show by the Blue Angels, and festivities galore.

The ships began to arrive on Wednesday June 13th. Past met present as 1812 living history reenactors gave tours of important sites in the Battle of Baltimore (like the battles of North Point and Hampstead Hill)  while the 2012 Navy parachutist team, the “Leap Frogs,” put on shows at Clifton Park and Patterson Park.

Thursday was Flag Day, and as any good Baltimorean knows, the US Flag that flew over Fort McHenry during the bombardment was not made by Betsy Ross,  but was sewn by local widow Mary Pickersgill. When Francis Scott Key penned the Star Spangled Banner it was Pickersgill’s flag he saw waving at dawn’s early light.  During a special Flag Day ceremony at the Flag House three strands from the original Star-Spangled Banner were sewn into the National 9/11 flag.  Later that day the 33rd Annual Pause for the Pledge took place at Fort McHenry.

Looking at some of the smaller ships at the the marina near Rash Field. The Baltimore Aquarium is the background.

Free tours began on the ships at the Inner Harbor, Fells Point and Locust Point. And there was a concert and the Sailabration Festival Villages at Rash Field and Broadway Pier opened their stalls.

Friday boasted another beautiful day for touring the ships and enjoying the festivities.

Martin State Airport allowed visitors to get up close and personal with their military aircraft on Saturday and Sunday. Adventurous souls could even take a ride in the Navy Flight Simulator!

Four of the Blue Angels perform one of many jaw dropping maneuvers.

In the waters in front of Fort McHenry the Navy demonstrated its latest Special Warfare Combat Craft on Saturday & Sunday, while overhead the Blue Angels performed superhuman aviation tricks.  The Saturday night capped off with a concert and Fireworks at Fort McHenry. 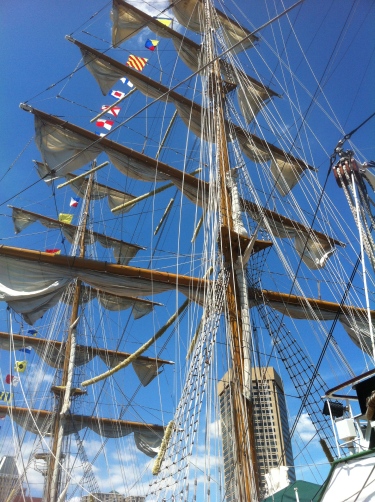 Rigging of the B.E. Cuauhtemoc, a Mexican tall ship.

Today, Sunday, will bring much of the same beautiful weather, ship tours, (crowds) and Blue Angels. Tonight you can catch  a Star-Spangled Symphony  at the Meyerhoff Symphony Hall. The musical event includes the premiere of Philip Glass’ “Overture for 2012”.

Brazil’s NVe Cisne Branco was docked at the Inner Harbor

On Monday representatives from the US, Great Britain and Canada will commemorate the anniversary of the Declaration of War on Great Britain with “From Enemies to Allies” at Fort McHenry at 10:30. Ship tours continue. 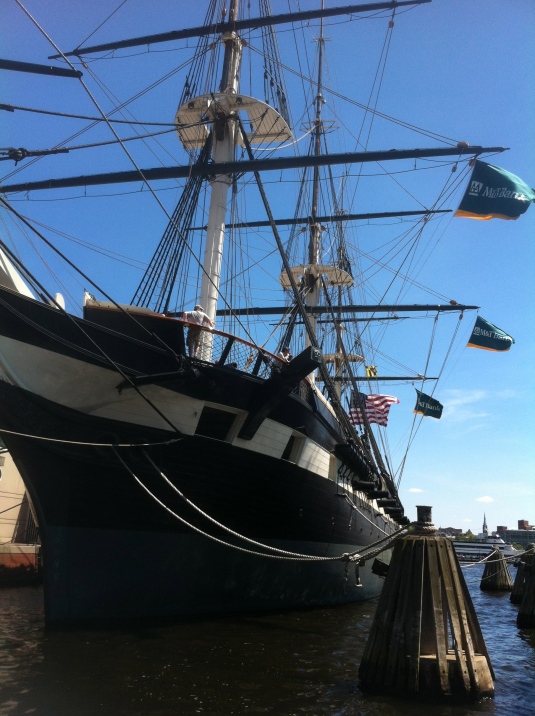 The USS Constellation, a Sloop-of-War ship launched in 1854.

The Sailabration ends on Tuesday as the ships leave the Baltimore area.

The tall ships debark from 11:00 to 1:00 on Tuesday. (photo courtesy of notesoftheladyupstairs)

Although The Battle of Baltimore and the Bombardment of Fort McHenry didn’t take place until September of 1814, Baltimore has gotten a wonderful start to celebrating the bicentennial of the War of 1912 with this Sailabration.

Oh, say can you see by the dawn’s early light
What so proudly we hailed at the twilight’s last gleaming?
Whose broad stripes and bright stars thru the perilous fight,
O’er the ramparts we watched were so gallantly streaming?
And the rocket’s red glare, the bombs bursting in air,
Gave proof through the night that our flag was still there.
Oh, say does that star-spangled banner yet wave
O’er the land of the free and the home of the brave?

All content is original. Photos by ritaLOVEStoWRITE and her daughter notesoftheladyupstairs.

Freelance writer, graphic designer, musician, foodie and Jane Austen enthusiast in Northern Baltimore County, Maryland. As a writer I enjoy both fiction and non fiction (food, travel and local interest stories.) As an advocate for the ARTS, one of my biggest passions is helping young people find a voice in all the performing arts. To that end it has been my honor to give one-on-one lessons to elementary, middle and high school students in graphic design and music. And as JANE-O I currently serve as the regional coordinator for JASNA Maryland and am working on a Regency/Federal cooking project. END_OF_DOCUMENT_TOKEN_TO_BE_REPLACED
This entry was posted on Sunday, June 17th, 2012 at 6:37 pm and tagged with Baltimore, War of 1812 and posted in 1812, American History, Baltimore, History, Maryland, Sailabration, Sailling, United States. You can follow any responses to this entry through the RSS 2.0 feed.
« Thought of the Day
Thought of the Day 6.18.12 »