In the 1920s and 1930s Frank Lloyd Wright (FLLW) began to look seriously at the way the common man lived. He wanted to design a series of affordable houses that were beautiful, streamlined, suited for their site and used local materials.  What he came up with was the USONIAN.

USONIAN houses were typically built as a single level dwelling. The houses had two wings. The public wing had a living and dining room. There was a  hearth wall that separated this formal area form the work area of the kitchen, “service core” of the house.  Then the house would bear off to a private wing for the bedrooms. FLLW’s goal was to build a USONIAN for $5,000 including the Architect’s fee, but, as with most  of his projects they tended to come in over budget. According the Wright foundation only 60 USONIAN homes were built.

One of those houses is the Pope-Leighy House in Virginia.

Loren Pope was a writer and copy editor for the Washington Evening Star when he approached Wright about building the house in 1938. He was  making $50 a week at the newspaper when he began to dream about owning a USONIAN home. Pope had a love for architecture and had read Wright’s Wasmuth Portfolio (a two-volume set of Wright lithographs with line drawings and schematics of his early buildings). He met Wright  at a DC event and convinced the architect to design him a USONIAN by writing him a letter.  He appealed to Wright’s desire to bring his artistic aesthetic to the common man (AND appealed to his ego) “There are certain things a man wants during life, and, of life. Material things and things of the spirit. The writer has one fervent wish that includes both. It is for a house created by you…. Will you create a house for us? Will you?” Wright’s answer was magnanimous “”Dear Loren Pope: Of course I am ready to give you a house.” 1 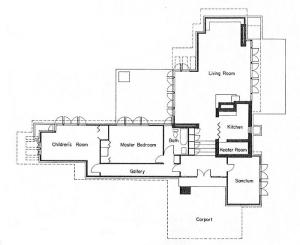 Floor plan of the Pope-Leighy house

Some of FLLW’s houses were build on octagons, but the Pope house was based on a 2 x 4 foot rectangular grid. There is radiant heating in the floor which was made of concrete and painted Cherokee Red (a favorite color of FLLW.)  Other favorite Wright materials are used as well, Tidewater red cypress, brick and glass. The exterior vertical mortar on the brick work was tinted red to match the red of the brick, while the horizontal mortar was left natural cream. That gave a strong horizontal feeling to the walls, and made the house look longer that it really was. 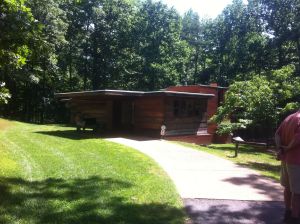 You approach the house from a shady cantilevered carport. This is the “Public” side of the  house Most of the walls on this side lack windows, except for a clerestory at the top. This allowed the family privacy. Wright created a unique clerestory design each house. 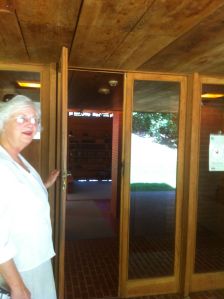 Our tour guide opens the front door to the Pope-Leighey house for us.

The ceiling of the carport and the entrance hall are low, but it doesn’t feel claustrophobic. You can see the living room directly opposite the front door and Wright used a sense of compression and release to encourage visitors to go through the entrance into the more important area of the house. The LIVING room was for living, after all. He brings you down a short set of stairs while keeping the ceiling line constant and suddenly the space feels massive. The ceiling height here is 12 feet. 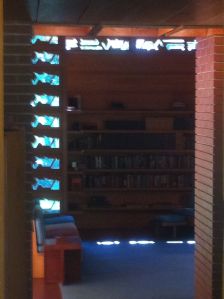 Living room as seen from the entrance.

The living room is warm and lush. The wood, which has been allowed to weather (as FLLW intended) to a stately silver on the outside is waxed to a wonderful rich orange inside. The light from the clerestory windows, the dining room nook to the left, and a screened in porch to the right wash this peaceful room with calm. The room is furnished by period pieces designed by Wright  some of which are original to the house (as well as a few reproduction chairs that visitors are allowed to sit on.)

The house from the garden. The dining nook comes right out into the garden area blurring the line between indoor and outdoor space.

FLLW strived to blur the line between the inside and the outside. When the floor to ceiling windows of the dining room are open he accomplishes the goal. Diners are both in the dining room and in the garden at the same time. The corner window opens completely — with no center sash — to give an uninterrupted view (A concept he borrowed from Fallingwater.)

The kitchen is small according to modern standards, but it was typical for the time. The tall ceilings make the room feel a little larger than it really is. There is a long skinny window  at the end of the kitchen, and FLLW created an herb planter just outside. All Mrs. Pope had to do was open the window and reach out to pluck a few herbs to add to what ever she was cooking. There is also a small utility room off the kitchen.

Exterior of the bedroom wing looking to the front of the house. This public side of the house offers a lot of privacy to the inhabitants, with only clerestory windows (above eye level) for light and air. 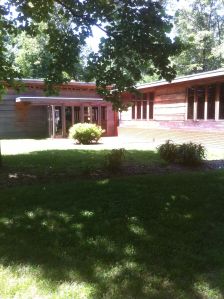 Back up the stairs and to the right is a door that leads to the bedroom wing of the house. A long, very narrow hall with a run of clerestory windows  leads first to a small bathroom (the only one in the house), to the master bedroom and to the children’s bedroom. The hall is very skinny –about as wide as a passage way in a Pullman railway car — so large furniture had to be brought in through the windows.  The children’s bedroom is especially light. With a wrap around window and two additional clerestory inspired at the far wall. Built-ins, like a child’s desk and cantilevered bookshelves make this room a delight. 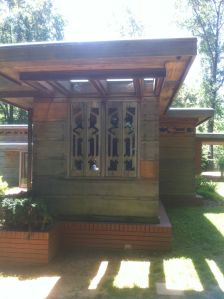 At the far end of the bedroom wing the children’s bedroom has it’s own cantilevered roof and special windows.

A room to the right of the entrance, opposite the bedroom wing was Mr. Pope’s Sanctum, his study, until the growing family converted it into a nursery for their child.

Loren Pope wrote an article about the design and construction process on the house and it was this article that inspired other middle income families in the mid 20th Century to turn to FLLW and seek out a USONION. The Popes had hopes that FLLW would build them a new, large home, but by the time the could afford one Wright was in the middle of building the Guggenheim. They only lived in the house for 6 years.

In 1947 The Leighey’s bought the home. They lived there happily until 1961 when they received notice that expansion of Interstate 66 would be going right though the property. The house would need to be moved or it would be torn down. After Mr. Leighey’s death in 1963 Mrs. Marjorie Leighey made a deal with the Trust for Historic Preservation and the house was moved to the grounds of Woodlawn Plantation by flat bed truck. (The masonry and concrete foundation are not original, as those could not be moved and were lost when I-66 was expanded.)  Mrs. Leighey continued to live in the house at it’s new location and gave tours on the weekend.  This first relocation proved to be troublesome as the house had been placed on an unstable marine clay foundation. So it had to be relocated a second time in 1995. Although this second relocation site is only 30 feet from the first is much more stable.

Now the house is situated on a piece of land that is very similar to the original plot. It faces almost the same site lines so the sun peaks through the windows just as it did when the Popes and Leigheys lived there.

Wright was delighted with the house. He thought it truly embodied this ideals of USONIAN design.

Motif detail for the Pope-Leighey’s clerestory. Looking from outside the living room toward the front door.

The house is open for tours Thursday, Friday, Saturday, Sunday and Monday (closed Tuesday and Wednesday) from 10-5pm. Tours are limited to 16 people at a time and cost $8.50 for adults. If you are visiting Mount Vernon the Pope-Leighey House is a short drive away and well worth the addition to your plans. (See the National Trust link below for more information)

• Peter Beers’s Pope Leighey House, 2003: Mount Vernon, Virginia page. This page has some wonderful interior photos, something we were not “allowed” to take on our visit. All my interior shots are taken from open doors and windows.

Freelance writer, graphic designer, musician, foodie and Jane Austen enthusiast in Northern Baltimore County, Maryland. As a writer I enjoy both fiction and non fiction (food, travel and local interest stories.) As an advocate for the ARTS, one of my biggest passions is helping young people find a voice in all the performing arts. To that end it has been my honor to give one-on-one lessons to elementary, middle and high school students in graphic design and music. And as JANE-O I currently serve as the regional coordinator for JASNA Maryland and am working on a Regency/Federal cooking project. END_OF_DOCUMENT_TOKEN_TO_BE_REPLACED
This entry was posted on Monday, June 11th, 2012 at 8:34 pm and tagged with architecture, Frank Lloyd Wright, Pope-Leighey House and posted in Architecture, Frank Lloyd Wright, Non Fiction, Pope-Leighey House, Uncategorized, Virginia. You can follow any responses to this entry through the RSS 2.0 feed.
« Thought of the Day 6.11.12
Thought of the Day 6.12.12 »