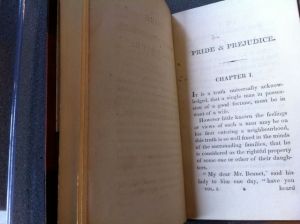 Hi… and welcome to my writing blog.

NPR recently held a  3 minute fiction contest. The rules were simple: write an engaging, fictional story in 600 words or less that would take about 3 minutes to read. All the stories had to begin with “She closed the book, placed it on the table, and finally, decided to walk through the door.”

Here’s my entry. Let me know what you think.

Marigold Ambrose was 86 years old the day she shut the pneumatic door of the Antiquities and Rare Books collection for the last time. She shuffled over to the disrobing station and carefully peeled off her “space suit.” She dropped the gloves, mask, and jumper into the laundry shoot and wondered whether they’d bother to recycle them now. As she stretched down to tug the purple protective booties off her orthotic shoes she felt the familiar zing of pain across her lower back and she thought, why bother?

So for the first time in 52 years of service at Darwin College, Dayton, Ohio, USA, Old Earth, my Great-Aunt Marigold ignored procedure. She’d leave the blasted booties on until she could sit down some where comfortable and take them off.

She returned to the door and fingered the keypad lock. A triple tweet, like that of the blue bird that once lived in the garden behind her childhood home, assured her that the lock was in place.

She allowed herself a last lingering look at the comfortable room where she spent so many years welcoming visitors — those few she had — and reading her books.

Real books. Printed on paper with hard covers of leather or cloth over boards.

She thought about the smell and the sound that greeted her when she opened an old friend. The slightly nutty whiff of mildew and dust accompanied by a whisper crackle as the paper bent to open wide.  “Hello” it said, “welcome back,” “lets snuggle up and read a bit, shall we?”

But that was the past. Her half a century– a mere turn of the page compared to these books– as guardian had come to an end, and no one was coming to replace her.

No one, indeed, would be coming at all.

No amount of arguing, debating, pleading on Marigold’s part had swayed the board of directors from their plan to abandon the Collection to Earth when the rest of the thriving institution moved off planet.

They had taken great strides to protect the books. What had once been a light filled, airy library was enclosed in dome of concrete three meters thick. Every breath Marigold had taken in her professional life had been carefully filtered and monitored through the ever humming HVAC-plus system. Neither dust mites, nor terrorists, nor book thieves could penetrate this modern day pyramid.

One day, perhaps soon, perhaps a thousand years hence, some Howard Carter of literature would crack through this building’s massive outer shell, reopen this door and rediscover this treasure trove of printed gems.

She had taken the trouble of placing her favorite volumes in the bookcase of the Visitor’s Parlor. So when the door beeped again the new reader would be greeted by Shakespeare, Austen, Orwell, Gaskell, Thackeray, and Tolkien.

Marigold touched the handle to the outside door. The digital lock counted down from ten as the air equalized.

She steeled herself for her new life and whispered a paraphrased last line from Vanity Fair…  “Come, children, let us shut up the box… for our story is played out.”

Then she walked into the future.

Freelance writer, graphic designer, musician, foodie and Jane Austen enthusiast in Northern Baltimore County, Maryland. As a writer I enjoy both fiction and non fiction (food, travel and local interest stories.) As an advocate for the ARTS, one of my biggest passions is helping young people find a voice in all the performing arts. To that end it has been my honor to give one-on-one lessons to elementary, middle and high school students in graphic design and music. And as JANE-O I currently serve as the regional coordinator for JASNA Maryland and am working on a Regency/Federal cooking project. END_OF_DOCUMENT_TOKEN_TO_BE_REPLACED
This entry was posted on Tuesday, May 22nd, 2012 at 4:45 am and tagged with NPR and posted in Fiction, NPR. You can follow any responses to this entry through the RSS 2.0 feed.
« “He that can have Patience, can have what he will”–Benjamin Franklin
What a wonderful world. »